International women’s rugby in 2021 on the edge

This week’s overdue decision to postpone the women’s Six Nations was the right one, but where does it leave women’s rugby on the international stage for the rest of the year and beyond? 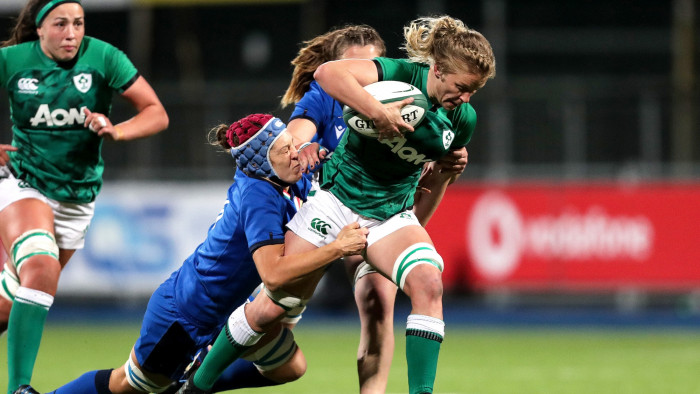 We have long called for the women’s competition to be held in a separate window, freeing itself from terrible kick-off times that often overlap with each other which  seem designed to put people off watching rather than entice them, and giving itself a shop-window where it can stand on its own two feet.

Obviously, the brand association with the giant of the competition that it is has been hugely important for the women’s game – and we should remember many other women’s nations look on with envy at the secure annual window these six teams have to play in – but it has long felt a matter of when rather than if it moved.

We’ll know at the end of January where the window is moved to – yesterday’s statement gave the organisers some flexibility by suggesting a Spring or early Summer timeline, which as Sara Orchard pointed out on the BBC, gave them a period of around six months.

But wherever it moves to, it’s unlikely we will really be able to judge this year whether the move has ‘worked’ given the low chances of the return of crowds by then and the race against time to sort out broadcast agreements. This may well be a bridge to the future, rather than the immediate future we’d hoped for, but it is a start, and an important one.

The Six Nations as an organisation has an interesting history with the women’s competition.

Those with long memories will remember the campaign we were involved in to stop it being disastrously broken up in 2013 and there has been precious little transparency about what those involved are actually doing to commercialise the competition or to grow it.

Rather, it has been the unions of France and England in particular who have shown what is possible – packing out their grounds and professionalising their players to make the product extremely sellable.

After years of standing still, suddenly as the women's game is taking off, talks of ‘growth’ are rife and in this week’s statement, there was no surprise to hear Six Nations CEO Ben Morel, who we have rarely heard talking about the women’s game, talking up the opportunities it presents.

The women’s Six Nations, still rather unbelievably without a title sponsor, has a massive opportunity in the coming years to move to another level. We are reliant however on those with the responsibility of running it, to see that and to realise it, and the way they have communicated in recent weeks and months, tells you a lot, in my view, about where and how they view the women’s game.

Second, to where the delays leave the rest of the women’s game this year.

I understand that relevant teams have been told that there is still a chance that the European World Cup Qualifiers could happen before the Six Nations, perhaps even at the end of March, and even if travel makes it impossible, it could be held in one country over a couple of weeks.

That seems ambitious – Spain would have to play their two games first - but if World Rugby could pull it off, it would give the Six Nations a clear run and open up some space in the calendar for other World Cup qualifiers and preparations.

As for the rest of the qualifiers – all sorts of options are being explored, from bringing teams to New Zealand early to play qualifiers close to the tournament (extremely difficult given the length of time amateur players would be asked to give up), to looking at locations in Asia, to host as many of the remaining games as possible.

World Rugby know too that New Zealand, even if it doesn’t allow many international fans to come in, could well fill the grounds with their home fans, but as the months go on, questions will have to be asked about what the right thing to do is here.

As John Birch pointed out to me yesterday, the women’s World Cup is primarily about aspiring players aiming to win, or simply take part in , the pinnacle of their game, and selling the women's game by showing it at its best. Whether it can achieve both of these things in 2021 remains to be seen.

And finally what of the Olympics? The decision here is obviously out of the hands of rugby, but if it goes ahead, how well prepared are the sides involved? European teams will have just a handful of  competitions before the event, other sides even less.

World Rugby will surely have to dig deep into its pockets to find ways of ensuring that its teams are in the best shape possible.

It's going to be a rocky year, with massive decisions to be made.

A delayed World Cup would also delay the start of the new structure World Rugby is putting in place for the women's game, with global windows likely to involve up to 25 teams - a gamechanger when it's ready.

The momentum the women's game had been building won't disappear, but it might be on hold for a bit.