With the World Cup less than 100 days away, Scrumqueens.com editor Ali Donnelly looks at where the top contenders stand at this stage of the year. 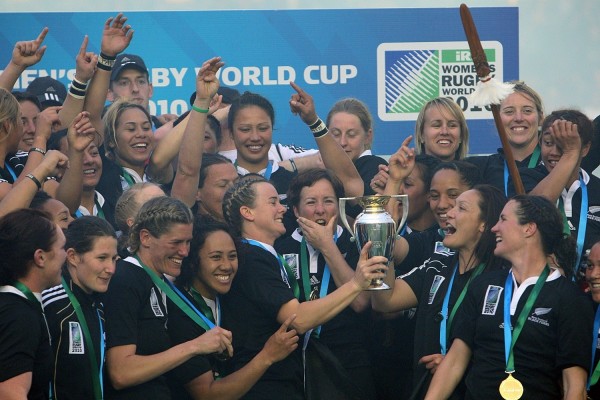 New Zealand, the reigning champions, will start the tournament as favourites.

Having beaten England in three tests last summer, they also have the advantage this time around of having warm-up tests against Australia, Canada and Samoa in the months leading into the tournament.

It was a distinctly different case in 2010 where New Zealand had just six tests between their win in 2006 and the tournament in London - this time around they’ll have had 12 games under their belts including a sobering five losses to England from which they will learned a huge amount about what is needed in Paris this summer.

What is most interesting about what’s happened in New Zealand since 2010 though is probably their progress on the sevens stage and how that might affect them at this World Cup. A recent Black Fern camp included contracted sevens players like Portia Woodman, Kayla McAlister, Linda Itunu and Honey Hireme – all of whom would be potent attacking threats in the black jersey in France. In fact even the inclusion of that quartet alone is enough to make New Zealand quite easily the most threatening team at this tournament – but they need to be able to transfer their world-class sevens skills to the 15s game and that isn’t always as easy as it sounds.

Despite a few wobbles this year, England are of course the team next in the mix.  Finalists at the past three World Cups there will be a sense of desperation for this group of players to lift the title – as we can make some assumptions that many of the senior players in there may well retire afterwards.  England have tried to make a virtue of their loss to France earlier this year, citing it as good motivation in a World Cup season, but there must be concerns that they are yet to hit top form in 2014 with hosts France having edged ahead on that front. But England will bring a squad packed with experience and talent to Paris and if they hit the heights of say 2012, when they won 12 tests, including three against New Zealand, as well as  a Six Nations Grand Slam and European Championship, then they will be incredibly hard to beat. Key player Emily Scarratt is back in top form as is centre Rachael Burford, Maggie Alphonsi is back from injury, and with more time than ever together to prepare in the lead-up, it would be a brave person to bet against them reaching at least another final.

Winning the 6 Nations has altered everything for the French who always ominously seem to play with significantly more accuracy and precision when they play at home. What was remarkable about that Six Nations triumph was the way it came on the back of a series of injuries to key players, forcing several last-minute changes to the team – not least the captain. The result was a squad largely based around club champions Montpellier, with three quarters of the starting pack coming from the club. The confidence and cohesion this appeared to bring to the forward play in particular was remarkable. Gallee Mignot, hooker and the stand-in captain, was inspirational. Overcoming a reputation for getting into trouble with officials, she channelled her aggression perfectly and led by example. Several other players, who had perhaps not achieved their potential in past years, also rose to the challenge. Marjorie Mayans in the centre was a revelation, not least in defence, Elodie Portaries thrived as a first choice front row selection, and Sandrine Agricole played so well that she even shelved plans to retire after the World Cup.

Even when the injured stars had recovered by the end of the Six Nations, French selectors – understandably – stayed with the team that was playing so well. As a result the great unanswered question for the World Cup will be which France will play in August  – “Malice” Yahe’s tried and tested team that has been building towards this moment for the past 3-4 years, or Mignot’s surprise package? For the moment they are keeping their options open, with a 39-player training squad that includes everyone, but at some point in the near future the coaching team will have to take some crucial decisions.

The recent CanAm series has also provided some interesting insight to where the North American sides stand ahead of Paris. Canada’s first win was hugely impressive but credit must go to Pete Steinberg’s US charges for their vastly improved efforts in the second game. Nonetheless, of the two it is Canada who will go to Paris in real contention for the title. Their games against Australia and New Zealand will be telling in the coming months, but the Canadians have raised their game this year and the inclusion of sevens stars like Mandy Marchak give them real pace and power in attack.

The great unknowns promise to be Australia. Deservedly third in 2010, they looked to be on the verge of taking on the world – of becoming a third team to challenge the duopoly of England and New Zealand. But, mainly because they ARU have decided to concentrate on sevens for women’s rugby, they have not played a single test match since. They have two tests, against New Zealand and Canada, planned prior to the World Cup, but fascinatingly have not included any of their sevens stars in that squad for that series. As a result – if the sevens players are released for Paris (and there remains no certainty that they will be) - even those games may not be any guide to how they will perform.  Regardless of talent, can any team really take on the world with so little competitive preparation? We will find out in a little under 100 days.

What is interesting though is how high each side have been setting their sights – at least publicly. So far only New Zealand and England have outwardly expressed an ambition to win the title. France and the US have stated that their aim is to reach the final while last week Canada said they were just targeting 4th place, and Ireland have said 5th.

Ireland too are worth a mention. Had they not been drawn against New Zealand their chances of breaking into the top four would certainly have been higher. As it is, it will be a tough ask and perhaps improving their ranking to 5th is realistic rather than pessimistic.

What do you think? Tell us below or let us know on Twitter