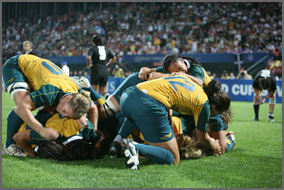 It's been a momentous year for women's rugby with so many achievements and developments that it's hard to narrow my highlights to 10. Feel free to share any of your thoughts on the comment section below.

I would also like to take this opportunity to say a big thanks to all of you for reading and checking the site to regularly since we launched in September. We are overwhelmed by the response and are hugely grateful.

The decision to include rugby 7s in the Olympic was a seriously significant one for women's rugby. Olympic inclusion from 2016 means that the women's game will be opened up to a raft of new nations and women's rugby should reap the rewards of exposure at one of the highest sporting levels.

This year saw international debuts at 15 aside level for Barbados, Malaysia and Saint Vincent and the Grenadines, at 10 aside level for Laos and Cambodia, and at 7 aside level for India, Egypt and Mexico. While these nations are at very early stages of their development, their national players will continue to improve as a result of taking part in international action. It's also great to see that the geographic spread of emerging nations is so varied.

As most teams (with the exception of the Black Ferns) know, England when they are playing well are almost impossible to beat. Wales have been trying to beat them since they took up the international game in 1987 and their victory in the 2009 6 Nations was a real achievement. The narrow defeat handed England their first loss since losing the 2006 IRB Rugby World Cup Final and meant Wales took the Triple Crown trophy for the first time.

Video Coverage from the Nations Cup.

Rugby Canada came up trumps this year at the Nations Cup by offering live video footage of every game at the competition which was contested by England, the USA, France, Canada and South Africa. With so little video footage available anywhere of the women's game at international level, this was a real bonus. Given that it's unlikely that television coverage of women's rugby is going to rapidly improve in the coming years - the World Cup aside - hosting unions should certainly consider offering a live video service at future international competitions. The Womens 6 Nations would be well served by a simple online highlights package.

Outside of World Cups we so rarely see New Zealand playing that it was a real pleasure to watch them in action three times recently in England. The tour culminated in a wonderful advert for the women's game at Twickenham where even in poor conditions, the two best sides in the world did a superb job in helping to raise the profile of the women's game. The tour also means that there now exists valuable video footage for other nations who will face the Black Ferns at the World Cup to help them prepare for the tough battles ahead.

Englands victory over the Black Ferns at Twickenham.

As mentioned above this was an excellent game which served a very valuable purpose in promoting the women's game at the highest level. But this England win meant much more than that. New Zealand were certainly a tierd squad having played three games in a short time, but the England win means that New Zealand are beatable and it will give much hope to their pool opponents South Africa, Australia and Wales as well as boost the host nation who must believe that winning the World Cup on home soil is achievable.

Sweden qualifying for the World Cup

Sweden qualified for the World Cup alongside Scotland at the Fira European Trophy last summer and their success was in no doubt a major surprise. Their chances of securing one of the two then remaining qualification places from Europe by topping Pool B were certainly not rated highly going into the competition not least because they would have to beat both 6 Nations side Italy and three-time World Cup participants Spain. Their qualification should give much hope to developing nations and though they may well struggle to win games at the World Cup, their participation should prove a real boost to the Swedish game.

FIRA recently re-launched its womens 7s development programme with F-EN - a sevens league, a series of regular tournaments for four emerging nations (Austria, Hungary, Croatia and Slovenia) which will occasionally include guests such as Bosnia/Herzegovina and Slovenia. At least three tournaments took place in 2009 and the next will be played in March in Zagreb. Also in 2010 eight of Europe's developing women's rugby nations will compete in the 2010 European Trophy in France in May. The teams competing will be France A, the Netherlands, Spain, Belgium, Italy, Sweden, Russia and Germany

Kenya win the Elgon Cup for the first time.

This year the Kenya womens rugby team won their first ever Elgon Cup title, an annual tournament held against neighbours Uganda. The competition was held over two legs, the first of which saw Kenya demolish their rivals 38-5, a lead that proved unassailable despite Uganda securing the second leg 12-5 (17-43 on aggregate). While it was heartening to see a side win a new title, the best thing about these games were the determination of both of these African nations to play at international level. With no regular competition for either of the sides to take part in currently it has to be disheartening for both to face only each other year in year out. The IRB certainly need to introduce more regular competitions for African nations and its doesnt add up that neither side have ever played South Africa who would certainly offer a stern test.

Having not won a game since 2006, the USA came into the Nations Cup this summer expected to finish third or fourth at best. However a string of sterling performances they played well against England, beat South Africa and Canada and drew with France saw them finish runners-up, and if they continue on their upward trajectory they can be force again at the 2010 World Cup.

Womens rugby was showcased at major stadiums this year with England and New Zealand playing at Twickenham and France and Canada squaring off at the Stade de France. These double headers will no doubt have brought many new fans to the game.

Asian women's nations have been playing far more regularly in recent years with Singapore and Hong Kong preparing well for this years Asian Qualifiers. Though Kazakhstan won the World Cup spot for the region, a regular Asian tournament at 15aside level would be hugely welcome, especially as Malaysia are not competing at national level.

Australia winning the first ever Womens Rugby World Cup 7s. The Australians are another nation who we rarely see outside of World Cups so it was a joy to see them come alive on the 7s stage. If their players can make the transition well to the 15s game, they will be worth watching in 2010.