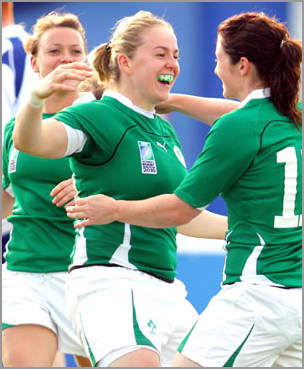 Ireland women's rugby fullback Niamh Briggs brings us the second installment of her 6 Nations blog. Briggs writes ahead of Ireland's game against Scotland, which will be streamed live by the IRFU, and she reflects on a strong campaign so far for the girls in green.

Here we are with three games down in this years 6 Nations, we are over half way there and going into this weekends match against Scotland I thought it would be a good time to reflect on how we are doing!

Much has been documented about our bizarre start to this years tournament; it really did seem that the so called luck of the Irish wasnt on our side. Our first match against Wales was abandoned at half time due to a frozen pitch, a correct decision by the referee at the time but never the less a tough one to take, especially as so many people had come to support us that night and for that it was disappointing. Our home Ashbourne RFC boasts one of the best pitches around and there is definitely something special about our Friday night lights atmosphere but despite the grounds staff best efforts the cold snap had well and truly set in.

Next up was France and despite travelling through the night we were very disappointed about our one point loss. In fairness to France their ability to attract a crowd is nothing short of amazing and to have 10,000 people out supporting their national team bodes well for the World Cup in 2014, all this even after moving the time of kick-off forward to ensure that the match went ahead. It was a brilliant atmosphere to play in and despite having most of the territory and possession we were unable to achieve our first win on French soil. A bitter pill to swallow but a major plus for us was the fact that we could blood five new caps in such a high tempo game with a brilliant crowd. A lot of lessons were taken from that game and had we been more clinical in our execution I cant help but feel that we could have come away with a win.

Next up was Italy at home and again we had tremendous support in our 40-10 points win in what was a very tough and physical match. Italy are improving all the time and we had to defend for long periods of time. We also got to blood two more caps although Ruth covering the front row came on twice due to a sin binning wanted to know if that counted as two capsa definite fine I may add!!

The following weekend we took on Wales in the re-fix match, it felt strange playing at home during the day but a great crowd came out to support us yet again and we managed to turn in our best performance to date. Beating Wales 36-0 was a first for us and a great confidence booster to the squad. Im sure that travelling over and losing their captain Rachel Taylor all on the morning of the match hindered them somewhat, but we managed to score some fantastic tries and keep a clean sheet and this will no doubt boost our confidence going into this weekends game against Scotland. The Welsh match also brought a special day as it was the birthday of our captain Fiona Coghlan. Now I wont tell you what age she is but those in last years squad will remember celebrating her 30th in style after the Scotland match in Edinburgh!!

And so we have two more matches left and it seems like the tournament is flying, Scotland this Friday is our last home game promises to be a tough and physical battle. Scotland are a proud rugby nation and they are always very tough to play against. They have some excellent ball players across the park and we will need to be on top of game to get a win. In the last weekend of the tournament we travel to London to take on champions England on St. Patricks weekend. England pose a massive challenge for us as they are an incredibly physical team and can attack from anywhere.

They will be going for a seventh Gram Slam title if they manage to beat France and that in itself is the biggest compliment I can pay to them. As a squad we are looking forward to the challenge but for now we cannot look past Scotland who will pose a massive threat to our unbeaten home record this season.

Also great news this week that our game against Scotland will be streamed live by the IRFU. Make sure you check it out here!