Game of the tournament set up nicely

The upcoming France V England game in round four of the women’s 6 Nations will determine who and how this year’s title is won writes Ali Donnelly. 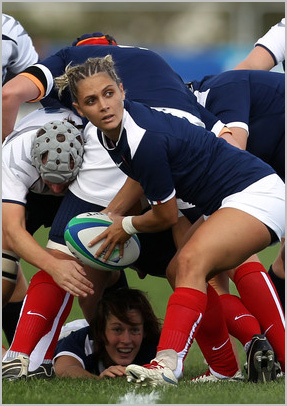 With both sides going into the game on unbeaten runs, theres no surprise that this will be the crunch match of this years tournament.

France in France, no matter how their season has gone to that point, are always capable of pulling a massive performance out of the bag for England as they showed two years ago when despite losing to Scotland earlier in the tournament, they pushed England all the way, losing by just a point and missing a kick to win it at the death.

England, vying for their sixth consecutive 6 Nations title, have had little problems in recording their first three wins before their biggest test in Paris.

As expected there have been comfortable wins over Scotland, Italy and Wales and while Gary Street will be pleased with the comfortable margin of the victories, he and his squad will know that there are still improvements to be found before they face France.

Against Wales at Twickenham England had some breakdown problems though the return of the brilliant Maggie Alphonsi, who if fit, will certainly start in Paris, will help there and referee Sylvia Bos was very quick to whistle, while elsewhere Wales had a lot of success disrupting the England lineout.

That area will need to be better against France who scored three of their tries against Scotland last time out from well worked catch and drive lineouts.

If this is a very tight game, a deciding factor is likely to be the boot. Albeit kicking in the womens game is not a universal area of strength, neither kickers going into this weekend are hugely on form and in a match that could come down to fine margins that could be crucial. Both Katy McLean and Aurelie Bailon missed all of their conversion attempts in the last round and given how the game against these two went two years ago both will want to see an improved return.

Regardless though England will go to Paris as huge favourites. Street has rotated his squad a lot this year but he will name his strongest side for France. Alphonsi, Sarah Hunter and Rochelle Clarke will surely start having come off the bench last weekend and England will be the stronger with for their input. Englands scrum will be powerful and out wide the form of Scarratt and Micheala Staniford in attack will mean they will always be dangerous given space. It is a measure of the standards England have set in the 6 Nations in recent years that they can win a game by 33 points and still not have played to their best an France are going to have to be near their absolute best to beat them.

France for their part are going well in the tournament without setting the world alight. They could easily have been turned over by a dogged Ireland side, sneaking the game in front of a massive home crowd by just a point, and they got a little of luck with some refereeing decisions in their win over Scotland at the weekend. One area of real strength though has been the power of their pack who have been muscling them to victories in the past few weeks. In the wins over Italy and Scotland in particular their pack had much success in setting up their scores.

But they showed against Ireland that they are vulnerable when put under immense pressure up front and England will need to take the game to them. France though are quick to point out that in their tightest game against Ireland, they were without a number of attacking players who were with the 7s squad that weekend so I expect this home team to be more structured in that area.

Captain Marie Alice Yahe (pictured) is a hugely influential player for her side and England's backrow and whoever they pick at number 9 will have to keep close tabs on her.

But ultimately for me England are still clear favourites and I expect them to take this game out, however close it might be, on their way to another title win.