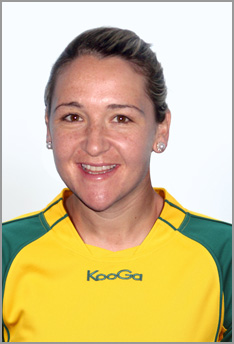 Australia star Kristy Giteau gives a fantastic insight into the world of international women's rugby. She talks funding, development and the future of the sport. Giteau played a key role this year in helping her team finish third at the Women's Rugby World Cup. This blog originally appeared here.

Welcome to the world of mens rugby.

Being a sister of a Wallaby has definitely exposed me to the luxuries that men have bestowed on them. I have watched my brother play in some amazing tournaments, travel and experience once in a lifetime memories and he is the greatest advocate of his sport. This led me to strive to be the best I can be in my chosen sport, which happened to be the same - rugby!

Training at 6am before work... CHECK... booking and purchasing your own plane ticket and accommodation... CHECK... apply for leave that I have accrued from doing weekend work prior to tournaments... CHECK... chip in some money to cover the cost of food throughout a tournament.... CHECK... wear cheap singlets in an attempt at a playing kit that can be worn at a tournament so we look united... CHECK... Welcome to the world of womens rugby!

Whilst our experience is vastly different to that of the men, involvement in elite rugby has exposed me to some phenomenal things. I have travelled to different countries around the world, some desirable, some maybe not on my hit list of must-see places but all have been nonetheless rewarding. I have developed friendships and now see these girls as my second family. I have been fortunate to sing the national anthem, emotionally choked, in front of and surrounded by people who have witnessed me sacrifice a lot to be there. The sport that has given so much to me and yet, my family still sees me frustrated by the lack of domestic and international competitions that would guarantee our sports growth to potentially dominate the world stage.

For women who work a full-time job, clock up 15 hours a week training semi-professionally, committing themselves to a national satellite program - with no certainty on when the next competition may arise - and manage families (all in their spare time!), a rugby tournament is generally a great reward for a week well done. It is embraced as a relaxing getaway and, at times, an outlet from the mundane and sometimes stressful world that we all face.

This reward generally is very costly and at times not a viable option for many girls, particularly the Wallaroos who have just returned from a four week holiday playing in the World Cup in England. For many women who play representative rugby, taking four weeks off work could mean these girls are saving for months prior in order to afford the opportunity to represent their country in the biggest event for our sport.

Women who play rugby do not play for the financial gains as there are none. They do not play because they want to outdo the men as it is a different style of rugby played between the sexes. They play because they love the physicality, the fierce competition and the intrinsic rewards it offers. Dont get me wrong though... extrinsic rewards make the rugby experience all the more sweeter, but it is not the primary reason why we play rugby.

I am not one to pull out the violin and talk about the injustices that we face as female elite athletes. I do acknowledge that until you can make money for your sport or product then you should not receive anything in return. However, until support and opportunities are presented we are not able to demonstrate our capabilities on a world stage.

To date, the womens team are the World Champions in 7s and are the third best team in the world in 15s without having played an international game for two years prior to World Cup, except for a qualifying match for the World Cup against Samoa

With rugby 7s becoming an Olympic sport, we are starting to slowly see women gaining more opportunities for competition and promotion. Recently we were sponsored to compete at the Gold Coast Sevens, with this experience proving different to previous ones; we were treated like the men! Accommodation and flights were booked, kits distributed, food supplied and every demand was catered for! The event proved to be a huge success with the Samurai ULR womens team winning the tournament and the sponsors were happy.

The kit looked great and the girls modelled it proudly, bragging to anyone that would listen that our bright lime jerseys and fluorescent yellow boots would get its fair use post tournament. The event was not only a success because of the result. It was a success because it was a rare occasion where we were used as ambassadors for a major sponsor at an international tournament. This is definitely a big step in the right direction for womens rugby and in particular the future of 7s in Australia and on the world stage.

I can only hope that with 7s being introduced into the Olympics, that we will see more opportunities being provided for women to compete in 7s tournaments domestically and internationally with sponsorship backing. Junior and schools pathways are needed with meaningful competitions to sustain success and attract potential sponsors that could not only provide these rugby opportunities but also support the administration and infrastructure of the growing global of womens sport which is currently being viewed on as an additional burden on mens rugby.

To date, we have had the amazing support of an amazing man, Graeme Holland, who has shown great faith and belief in the Australian womens team. He has, with the support of other sponsors, provided the women with some domestic and international tournaments that would not have been a viable option without his support. With major and minor sponsorship following we have seen Playmore, Samurai, Mizuno, Eagle Boys and ULR come on board, to ensure we could promote and package womens rugby in the best light, in front of club, state and national teams as well as rugby enthusiasts and the wider community.

These sponsors were bold, invested their faith in us and took the first step in exposing us to the luxurious world of the mens experience... I wonder who will follow?