Giving fans something to shout about 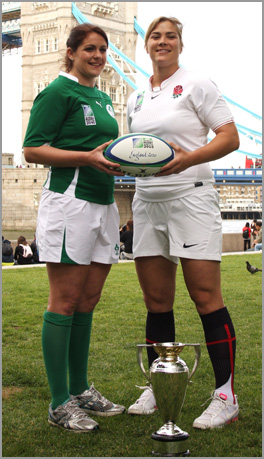 Ireland captain Fiona Coghlan brings us a great insight to life in Surrey this week as teams prepare for the first round of the Women's Rugby World Cup. Fiona is pictured left with England captain Catherine Spencer at the World Cup launch this week.

Finally we are in Guildford.

We arrived on Monday evening just in time for some food. After dinner we had an unexpected training session. To be honest it was the best thing to do, just to get the travel out of our legs and knock any cobwebs out of us. We had great craic that evening decorating our house.

We bought some of the tackiest decorations going in the pound shop and added a bit of colour to the house, trust me our house is easily identifiable now.

The university and accomodation is seriously impressive and there is a good athmosphere around, we are teaching a few teams how to play hurling and the USA team showed us a few American Football skills and I think the Swedish are going to introduce us to a game called Burnball - who knows what that will entail.

Obviously there is serious work to do to and we have had two sessions each day, followed by the usual recovery in the pools and ice-baths. With a tournament spanning three weeks and playing five games I think recovery is going to be essential to get through it.

On Wednesday all the captains and coaches were brought to London for the official media launch.

It was brilliant to see such an interest being taken in this competition. Firstly we had to take part in a photocall with Tower Bridge as the back drop, I would imagine the backdrop looks really class in the photos.

This was followed by a series of interviews with the press and then the official launch. I was amazed when the Minister for Sport was listing off all the huge sporting events that London will host over the next decade, firstly the Womens Rugby World Cup, 2012 Olympics, 2015 Mens Rugby World Cup and they are bidding for the 2018 Soccer World Cup. It was an excellent launch and I hope it will generate even more exposure for the game.

We are really looking forward to just getting on the pitch at this stage, Friday cant come quick enough.

We face England and of course they are the favourites, they are a fantastic team and a team we respect and their record speaks for itself.

However we are happy with how our training has been going but we are realistic and know if we are to win on Friday we must be at our best for the entire game. One small mistake by us and we know England can strike from anywhere. But once we step over the line on Friday it is 15 v 15 and it is game on. To have the game live on Sky Sports 2 is brilliant and hopefully it will be a good game for everyone to watch.

I hope there will be a big Irish support over for the tournament considering the close proximity. I know some of my club-mates are coming over for the three weeks and guaranteed they will add life to the crowd.

We as a team have been overwhelmed by the good luck messages, cards, flowers etc that people have sent.

People I havent spoken to in years have gone out of their way to get in contact to lend their support. Hopefully we will give them something to shout about