In the first of our Premiersip blog, Bristol's Emily Ryall tells us about life in the south-west as her side strive for a strong league position this season. Ryall has played in the Premiership with Bristol (formerly Clifton) and Saracens and helped to initiate the transfer of Clifton to Bristol in 2008. 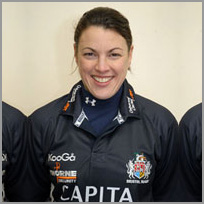 "At Bristol, we were really disappointed with our league finish last year and felt that too often we under-performed.

There were too many games that we should have won but didn't. Some of this was due to a large change in personnel who weren't used to playing together but much of it was put down to a lack of self-belief. This will hopefully come in time as individual players mature and develop and the team cohesion grows.

So with the addition of a new coach and a new wave of incredibly talented and young players, we are determined to ensure that our results are better this year. We were fortunate to start this season by playing OAs who had been newly promoted and although we got the win, we were frustrated we didn't secure an additional bonus point (it didn't help that, for no apparent reason, the referee insisted that we played u19 laws!).

Nevertheless, as highlighted by the recent World Cup, the standard of women's rugby continues to progress and the quality of the game was high. This was similarly the case for our losses against Saracens and Darlington which showcased some impressive skill and running rugby, cumulating in the scoring of a multitude of tries.

These high and close scoring contests can be only be a good thing for the game if we want to attract spectators and sponsors. (Whether it can continue throughout the winter months, with the cold, rain and mud remains to be seen!)

Although it's relatively early in the season, Bristol rugby is in a really healthy place at the moment and I feel absolutely confident that it will remain so.

When I returned to (what was then) Clifton three years ago after a four year sabbatical at Saracens, the average player age was in the mid-thirties and the first team had remained pretty much the same for a decade. Now, after an influx of some very promising young players (and the retirement of several older ones), the average age has dropped about 10 years (I'm now the one holding it up!).

This is great news for Bristol and the development of the club in general. This has also been helped by promoting further links with local Universities which have provided raw talent to be developed in the re-established second team, as well as a really dedicated committee that are doing a sterling job of ensuring that we remain financially viable. As far as I'm aware, we are the only completely financially independent women's club in the UK - which poses a real challenge considering we have to rent training and playing space as well as all the other financial costs involved in running a club.

We've also got a wonderfully supportive (and rather intimidating) base at Dings RFC as well as various outlets that are achieving good publicity for our club in both the local area and further afield. As such, it will only be a matter of time before this commitment, enthusiasm and talent will translate into a more apposite position on the league table."