In her first blog for www.scrumqueens.com, Ireland prop Fiona Coghlan talks about preparations for the season ahead.  Coghlan, who has been capped 48 times by Ireland, has been the side’s vice-captain for five seasons. She will write a regular blog for this site. 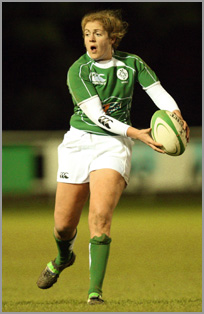 After six weeks off we were back training as an Ireland squad at the beginning of July.

This year weve been given a dedicated fitness coach in Sami Dowling who has been involved with the Leinster based Irish players for two years and he is a major addition to the squad. However in the middle of a lung-busting fitness session I can think of many not so nice things to call him!

The Irish players were fitness tested in early July and then retested in September. During the week players undergo fitness programmes in their provinces which are monitored by provincial fitness coaches. Apart from that there will probably be no Irish Squad session again until November and perhaps some build-up games before the Six Nations next year.

To date their have been no retirements from the Irish squad this year which is great, so the squad when picked will be a blend of youth and experience. Lynne Cantwell is one notable absentee from the squad this year as she is gone to ply her trade in New Zealand for the season. However it is envisaged that she will be back in May to be considered for the World Cup squad. In Lynne we are not only losing out on an excellent player but one of the great characters of the squad. If you ever wanted an interesting conversation or a laugh, you would go looking for Lynnie. She better be back in May!

In the meantime players are busy with the club season kicking off and also with the Irish Interprovincial series. The Interprovincals here involves Leinster, Munster, Connacht and Ulster. We play each other once, with the top two teams playing off in a final and the other two teams battling out for 3rd/4th position.

Munster will be favourites to take the title after winning it three years in a row but there will be stiff competition from the other provinces, most notably Leinster, that have played Munster in the last three finals, losing each by a single score. It is great this year to see some ex-Internationals back involved in the game, Fiona Steed and Sarahjane Belton coaching Munster this year. In these two, Munster have gained two of Irelands most distinguished players that are no doubt excellent coaches too.

In Leinster Philip Doyle (the ex Irish Womens coach) takes over the coaching reigns. Philip was instrumental in the improvement in Irish Womens rugby in recent years. He introduced a major level of professionalism and standards to the womens game at national level and he has now done the same with Leinster. He is ably assisted by Tania Rosser (a current Irish international player) as backs coach, Tanias coaching ability has already been noted, as she coached Blackrock to an All Ireland title two years ago. Connacht and Ulster are always somewhat of an unknown but always tough opposition.

As the season kicks off every provincial players is looking to set out their stall and get selected for the Irish squad. With this being a World Cup year, it means the Interprovincial series has added importance for players to be seen.