Keeping positive and moving on

Former Canada player, Meghan Mutrie, has posted her second blog and tells us how she has recovered following a serious brain injury sustained when playing for Canada two years ago, and more about her work in recent months promoting the Canadian national women’s team. Mutrie also reports on the men's game. 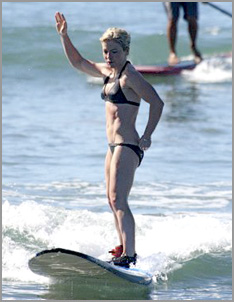 It feels like Im facing the wrong way in an elevator.

Im currently living on Vancouver Island on the Canadian West Coast, a short hour and a half ferry ride from Vancouver, and as the rest of the world tunes into the Winter Olympics, here I am trying to cover international rugby.

I am in fact heading to Vancouver this weekend, but it has nothing to do with the Olympics; I wanted to keep like company on Valentines Day, so I will be spending a few days with two of my best and single friends. Im doing my best impression of blending in at a Victoria caf while waiting for my most recent Rugby Rundown show (a video I put together for the Heavens Game website) to upload, but because Im a) not wearing any hemp (hippies) or b) in group therapy (local AA chapter meeting), I stick out here, too.

Hey, it beats the wireless signal I usually steal from my neighbours. Dont judge.

My life has become decidedly nomadic since my first/last blog for scrumqueens in September, which is actually a comforting sign of a return to normality for me. I have mixed feelings about how long it has been since my accident. Sometimes I am amazed at how much has happened in the short year and a half since, but other times I get a bit frustrated - and even a little embarrassed or guilty - that it has been over a year and its still a factor in my life.

However, I was given a stark reminder last week of how lucky I am. It also gave me a healthy nudge away from the frustration side of all this and a bit of fresh perspective (read: swift kick in the pants). I was at the hospital for a regular check-up with my neuropsychologist, and while waiting for my appointment, I watched another brain injury patient fall over and break down hysterically while trying to do the exact same balance exercises I used to have to do while I was learning to walk again.

Having said that, I feel amazing and my health is almost back to 100%, barring a few symptoms that are taking their time letting go, namely insomnia and a healthy dose of fatigue. Irony at its best. Geh.

But I have made a very conscious effort since September to just get on with it, actually much like an athlete would just strap up an ankle that wasnt 100% and play on it anyway, and it has paid dividends.

I am really enjoying my role as Canadas National Senior Womens Team communications officer (wow, that is an unnecessarily long title), and the other freelancing media opportunities it has afforded me along the way. I held the same role with the BC Bears, a mens team in the IRBs Americas Rugby Championship, for a few months in the fall. It was the first mens team that I worked with, and I absolutely loved it. Both the guys and staff were polite, professional, and fun. The head coach, Mike James, is a former Canadian international, 10-year Stade Francais veteran (ha, yes, he was in the calendar), and the reason I ended up sitting across from former Argentine scrumhalf Agustin Pichot for a three-hour interview in Toronto.

When I went to France with the Canadian women (a great experience in itself), I stayed behind for a few days on my own, and made my way down to Marseilles after my former club coach in New Zealand, Ken Laban, arranged for me to interview former All Black, Tana Umaga. Both interviews provided great experience and international exposure, and the published stories, combined with the video reports I have been producing for the Canada women, landed me my current job with the Australian website, Heavens Game. The website creator, Jeremy Beynon, got in touch via email and good ol Skype after watching one of the France video reports, and things just sort of went from there, which leads me to this blog.

I emailed Ali, scrumqueens founder/create to see if she would be interested in posting the Rugby Rundown, once I learned that I would be covering the womens Six Nations competition as well as the mens. In all honesty, it was Jeremys idea for me to cover both comps.

I have a confession: I never actually intended to be any sort of specialist or pioneer when it came to providing coverage of womens rugby. Ali is the champion, in that regard. My rise was more because of a mutually beneficial opportunity: I needed a medium to start honing my journalism convergence skills, and international womens rugby was an unexploited niche as far as media coverage. The popularity of the video reports on youtube proves that quality womens rugby is more than marketable, if packaged properly. I believe a lot of that marketability is because of the quality personalities of the athletes who play rugby both men and women and Im learning that within the sport, I especially enjoy meeting and writing about the players themselves.

While I was at grad school in New Zealand, I explored a few different avenues within journalism, and actually, I was still playing rugby, so at first I avoided sports reporting as it just seemed too easy, obvious, and my life was already pretty rugby-saturated. But another helpful nudge this time by my wonderful lecturer Alan Samson and an introduction to the Wellington newspapers rugby reporters, started me on down this path.

Just like when I played, I am constantly learning. I felt a bit like Helen Keller playing spin-the-bottle when I first started, but my schooling, combined with my sporting background (not just rugby), really helped me on the unfamiliar other side of the touchline.

One of my personal challenges is to provide insider coverage to the NSWT, but still present match previews and reports fairly. Although I work specifically for Canada - so a little bias is fairly unavoidable - I still try to report fairly, as opposed to putting a PR-spin on everything. I think its an insult to the players and fans otherwise; anyone can read between patronizing PR lines.

The same obstacles - lack of funding, exposure and resources that make womens international rugby a challenge to play, also make it a challenge to cover.

France did an outstanding job of hosting the Canadian women in November. The match at Stade de France was a benchmark for a lot of reasons, but from a media perspective, it opened my eyes to how easy things could be when as a journalist, youre taken seriously, given full access to both squads, and even a little thing like having access to the internet while covering the match is expected.

The disparity between the match at Frances national stadium compared to Canadas next test on a barren American football field in Florida, where the teams had to sing their own anthems to a crowd comprised mostly of their relatives, was fairly obvious. But, as high-level female rugby players have always done, they just got on with it, never complaining. As for me, I was left clinging for my life on to some rickety scaffolding to get a better vantage point for match footage.

I should add, the Americans did a wonderful job of hosting as well, but Stade de France is a tough act for any union to follow.

Canadas next event is a tour to New Zealand for two tests in April. Dates and venues have yet to be confirmed (sigh), but the squad is Christmas-morning excited for a chance to travel to a keystone nation of rugby and test themselves against the World Champions. I adore New Zealand as a country anyway, but the tour is much more to me than a few rugby matches. When I left NZ (where I was living) in August 2008, it was only supposed to be for a two-week trip to England to compete in the Nations Cup, so I had two bags to my name including one full of my rugby kit.

I havent been back to NZ since my life was interrupted by a brain injury; all of my belongings were moved into storage by my lovely flatmate, and when I had said goodbye to my friends and teammates there, it was a half-hearted see you in a couple of weeks sort of thing. I had a month left of my grad journalism program, which Im proud to say I have since completed (again, with the guidance of Alan and Grant Hannis), and I get to finally provide some closure when I walk the graduation stage in Wellington on May 27th in front of my old classmates, teammates and lecturers. And I think my family as well, actually.

Im planning on moving back to NZ permanently in September, after the WRWC, and am aiming to cover the mens 2011 World Cup, both in print and broadcast capacity.

It has taken me a long time to arrive at this point (quite literally a year and a half and a way-too wordy blog), but this injury has actually been a really good thing for me.

It is an ongoing process, and even though the daily pace of my life is a bit slower, and it sometimes takes me a bit longer to do things, the amazing opportunities, along with the sometimes harsh and humbling perspective it has given me, has made me a better person.

So, having said all of that (wow, note to self: brevity is a skill), please enjoy the coverage of the Womens RBS Six Nations for the next few weeks on the Rugby Rundown. And enjoy how I try to write the worlds rugby news into a three-minute time constraint. You can watch the Rundown on youtube, or download it for free from iTunes.

On a quick serious note, thank you for the moving response to my first blog. Ive always considered myself an open person, but this injury is incredibly personal and sometimes even a bit lonely. The genuine support Ive received from the community (and especially from my former Canada teammates) has made it a lot easier to share, so thank you.

In the future, if you see me loitering on the sidelines (you cant miss me Im the blonde circus midget who looks like she has no business being anywhere near a pitch), please dont be shy and come say hello; Ill never refuse a hug.

Photos: Speaking to schools in Vancouver as an Athlete Ambassador for Right To Play as part of their Olympic partnership and standing up on a surfboard in Hawaii, just over a year after my injury. It took me six months to balance enough to stand up to get dressed!