In her first blog of 2011 England winger Kat Merchant reflects on the months since the World Cup where she's been involved in rugby in Dubai and Finland.  Merchant has been capped 30 times for England. 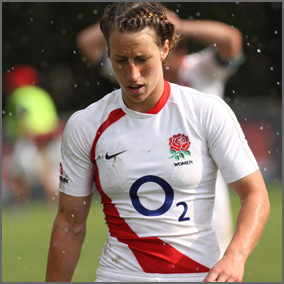 After an amazing coaching trip to Finland at the end of last year (which was reported here), I left temperatures of -20 to go to Dubai with Samurai for the annual 7s tournament there.

After setting off Tuesday afternoon and getting there Wednesday we were all pretty sleep deprived. After a quick nap at the hotel though and we were out training. It was then I remembered the pain of 7s! The dreaded 1 minute drill (coach Mike Fridays favourite) in the heat while jetlagged was a real treat for the lungs.

We finished training, of course, with a loser does all' game. Losers of the game have to carry bags, collect kit etc, so a lot hangs on them. We spilt into over 25s and unders, I was with the unders (Noli was not!!) and the game we faced was a penalty shoot-out.

After lots of banter, and some lack of goal keeping skill from Amy Turner it was the under 25s that claimed victory!

The next day we trained twice, including a heated game vs. the boys. We then played pool volley ball for the "losers" game, however due to bias referring by Mike the over 25s won.

Competition time and we faced some tough opposition, especially meeting Wooden Spoon in the semi-final. We came away with the win and faced France in the final in front of 45,000 people. We played some awesome rugby and ran in 34 points to 0. It felt fantastic to win and we celebrated in style and returned to England with most of us catching a viral flu thanks toour team mate Michaela.

Back in the England, preparation camps for 6 Nations are going well. We had a really tough camp on the 3rd and 4th of Jan with lots of bosh and a trial game- exactly what we needed after such a long Xmas break.

Im so excited for this years 6 Nations as its Englands first opportunity to look forward as we start our new 4 year cycle. Its time to rebuild and try new things to take us to the next level, and 6 Nations is the perfect stage to do it, against tough opposition.

Bring on the 6th of Feb!