Millard: Reasons to be excited

Scotland's Lucy Millard runs us through her side's training victory over Ireland last weekend and explains why she was up so early last weekend! 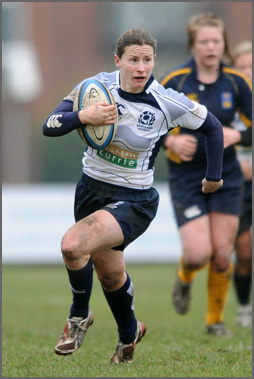 I cant quite believe its less than a month until the World Cup begins only a few weeks to put in place the final preparations, the final sessions that are going to ensure you are physically and mentally as prepared as you can be.

As part of these ongoing preparations, I found myself getting up at 7.30am last Saturday before our 10am meet for our training match against Ireland the following day.

I only live about ten minutes away from Lasswade RFC, where we were training, slightly less of a trip than my exile flatmate, Mel Berry, who got up some three hours before in order to fly down for her Welsh training weekend.

So, anyway, what was the purpose of this early start -was I out for an early morning speed session, to have a raw egg/protein shake concoction before going back to bed? No. Far more important than that, rather excitingly, the delivery man was at my door, with my shiny new World Cup rugby boots.

It might seem a bit sad to get excited about this, but when your life revolves around the pattern of work, eat train, sleep, you have to take all the excitement you can get!

So, apart from new boots, what else has been happening? Like every other team heading to London next month, we are trying to fit in as much training together as possible.

We were lucky to have a training match with Ireland at the weekend, which was a great chance for everyone in the squad to get some game time before we play Canada, and allowed the coaches to try out different combinations across a number of positions. A number of players really stepped up, particularly the younger players in the back three Celia Hawthorn and Nicola Halpenny both played well, and scored well-deserved tries. Rosalind Murphy also had a good game in the second row, and it was good to see Lindsay Wheeler back from injury as well.

The conditions were certainly far improved from when we played them in 3 inch thick snow over in Ireland in December, although I suspect still a few degrees colder than it will be in London.

One of our squad, Ronnie Fitzpatrick has taken the idea of acclimatisation to an extreme level - she has moved to Dubai! Allegedly this is for a new job, but we all know she just ones to get ahead in the tanning stakes.

It is difficult to concentrate on much else with the World Cup so near, we have only a few more training sessions left, and the air of excitement within the squad is evident as we get closer and closer.

We have quite a lot of youngies in the squad, and the students in particular are most excited about getting fed for three weeks! There are plenty of older, more experienced members too, so the balance within the squad is fairly good.

Over the next few weeks we continue to have our Tuesday night sessions for those who are based in Scotland, as well as two more training weekends to prepare as best we can for that opening game.

By my next blog we will be well and truly in the midst of World Cup madness, a thought that fills me with a strange mixture of nerves, excitement and trepidation. Now better go and wear my new boots in