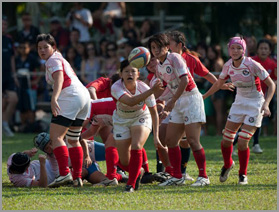 While all eyes will be on London this summer as the Womens Rugby World Cup kicks off, website editor Alison Donnelly says theres more to look forward to this year than the showpiece competition.

One of the truly interesting things for me since launching this website has been learning more about the international womens game outside of the established top 10 nations.

Like most womens rugby followers from the home nations, my knowledge of the game outside of the top European sides was decidedly sketchy a year or so ago, but what Ive been learning about how the game is moving on at international level has been pleasantly surprising.

A quick glance at our fixtures page will soon show that theres more to life this year than the World Cup.

The FIRA European Championship in France next month is a case in point.

Bar Sweden, none of the eight teams here will be at the World Cup but many will feel they are unlucky not to be so and will urge the IRB to extend the tournament in four years time to 16 teams, something I would wholeheartedly back.

Aside from that, theres a real chance here that one of the perceived lesser nations could take the spoils at the Euros. France A and Italy will be the two front running favourites and rightly so as theyll have the more experienced squads at the tournament but the Netherlands, Spain and Sweden will also be pressing hard and a title win for any of the latter three sides would prove that in Europe at least, theres more to consider than just the 6 Nations teams.

The Dutch women will in particular feel they have a good shot, having beaten Sweden twice this year and having already played France A already this year (they lost, but at least they know what to expect). During the tournament they are also due to play their 100th international fixture and they feel aggrieved that they didnt qualify for the World Cup so will be out to prove something.

Also in Europe this summer, over 30 teams, including England and France as well as developing countries like Poland and Isreal will all play in Fira's major 7s championships where teams we rarely see on the circuit play in Moscow, Bucharest and Odense. (More on that here)

Outside of Europe, womens teams in the Caribbean are also planning a busy summer with sides like the Bahamas, Cayman Islands and Guyana playing in two NACRA competitions in July and August.

And elsewhere many more international 7s sides like Finland, Portugal and Uzbekistan are taking part in competitions like the Amsterdam and Istanbul 7s with the African nations of Kenya and Uganda also in action on their own Elgon Cup.

Asia is one of the most interesting regions with action becoming more regular for the likes of Singapore, Hong Kong and Malayaisa despite the threat of the 15s game being curtailed in favour of the short form version of 7s.

Thats another debate for another day however but I think whats clear is that the womens game at the top level is gathering pace despite the bubbling progress of 7s rugby.

If the IRB does restructure the World Cup to include four more teams, something I feel they simply must do, there will be plenty of sides capable of being competitive in four years time.

*Alison Donnelly is the website editor for www.scrumqueens.com. She also contributes women's rugby articles to a range of rugby magazines and newspapers and writes a monthly blog for Sky Sports, the latest of which can be read here.