While one big win doesn't make a side world-beaters, South Africa's four-try win over Scotland at the weekend means a new emerging force in the women's game has certainly arrived. Website editor Ali Donnelly says the improving side need more regular competitions and investment to continue to climb the ranks. 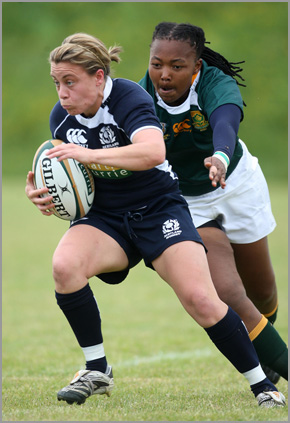 While one big win doesn't make a side world-beaters, South Africa's four-try win over Scotland at the weekend means a new emerging force in the women's game has certainly arrived.

After the last World Cup, where they finished bottom without a win, we heard little from South Africa on the international stage for about three years at 15 aside level.

Focusing instead on the Rugby World Cup Sevens, where they reached the semi-finals - and on training camps internally, little was expected of them at the Nations Cup in Canada last summer where they were preparing for their first test outings since 2006.

In their first game the South Africans managed a 17-17 draw with France, who while being out of sorts last year, were still expected to be far superior to a much less experienced side.

While they lost their remaining games at the competition, there was enough niggle in all of those three games ,especially in their 25-0 loss to England, to suggest that the team with the least experience on show, were the team who had most improved in the years since 2006.

Next up for the South Africans was the recent two-test series against Kazakhstan which was played in Dubai. The Denvar Wannies coached team coasted home in their first game before having to work harder in their second match for the win. The victories though gave them some momentum before heading to Scotland, a team they will feel are much closer to their rising standards than the Kazakhs.

The big issue for the South Africans is undoubtedly the difficulty they have in having to travel long distances for test games. The African women's game at international level is under-developed at 15 aside level with only Uganda and Kenya playing occasionally.

While the IRB have been working in Africa to develop the game, how quickly that will make a difference at international level remains to be seen. The South Africans are clearly one of the teams to watch in the years ahead but how much game-time they can get will impact how quickly they progress.

Unlike in Asia, where teams like Hong Kong, Singapore and Japan starting to play more regularly ,it's unlikely that the South Africans will find enough competition closer to home in the coming years. What they need are regular events, like the Nations Cup, to take part in and that must be resolved, whether that means encouraging the SARU to invest more in the women's national team, or organising competitions that they can take part in.

Depending how they fare next weekend in their second game against the Scots, South Africa will certainly now be targeting Wales and Australia as games they will hope to win at the World Cup. If they even win one of those games it will be a feat for a side who were whitewashed four years ago.

Scotland will claim with much justification that last weekend's result was partly down simply to not playing together in a number of months and while that is a credible reason for losing the match, it won't wash next week where they simply must win for the good of their overall preparation.

For a side who beat France this year, a victory this weekend is well within their grasp, and even if they do turn their fortunes around, the fact remains that the South Africans will be the emerging team to watch this summer.

SARU President Oregan Hoskons said it best this weekend when he said this about his women's team:

"This was their third successive Test victory and although they will not be among the favourites when we get to the World Cup later this year they are an underdog that has discovered its bite.