Pankey making up for lost time

USA women's rugby centre Sam Pankey has joined our roster of international bloggers and tells us how her side is preparing for a three test European series. USA face Italy in Rome and France twice in Orleans and Paris in a tough Autumn schedule. Pankey was a late convert to the sport but has made up for lost time. 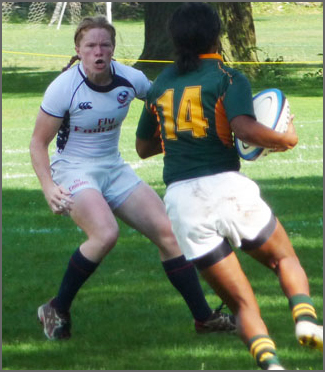 "Next week the USA Womens Eagles 15s squad will be ocean hopping across the Atlantic for our tour in Italy and France. We will compete three times during the tour. The first match will be in Rome against Italy on November 18, followed by two contests against France in Orleans (Nov. 21) and Paris (Nov. 24.). I am proud to be a member of that squad.

My name is Samantha (Sam) Pankey, and Ive been in the Eagles pool for a little over a year. My rugby career started about three and a half years ago. This was after about 18 years of playing basketball and thinking Id be a part of the basketball world, in some capacity, for a lifetime.

After college, I dabbled in other sports, diving for flies in slow-pitch softball, nailing grown-ups with a nerf ball in dodgeball, sacking quarterbacks in touch football, and I tried my hand at coaching. Then I had a good friend challenge me to try a real sport. From there, I joined my local Womens Club team. A couple of years later, I made my territorial all-star team, and my performance at our National All-Star tournament earned an invitation to an Eagles Camp. Now, here I ampreparing for yet another few test matches.

As far as that goesthe preparingover the last few months, collectively, we have had two camps to get ready for the tour. In the first camp, we competed more than we drilled. The design of the camp simulated the structure of a tour. We played full matches, recovered for the next competition, and practiced as needed. The second camp featured more drill work, more game plan discussions, and more fine-tuning the various mechanisms of our game play.

Individually, weve been putting in work as well, following our strength and conditioning program, developing our skill sets, and competing (the Womens Premier League, DI and DII seasons will be coming to a close next week). Weve had to make what some would call sacrificesI would say it is more like a balancing act.

All of this work has readied us for this tour, which I expect will be not only very competitive, but especially busy. Our trip is close to two weeks long, but the three tests will come within a seven-day span, but were ready and ultimately will be ready in 2014.