Clare Daniels took up refereeing in 2001 and has officiated at 16 women’s test games in that time. She also referees in the men’s game at National Three in the UK. She will write a regular blog for www.scrumqueens.com 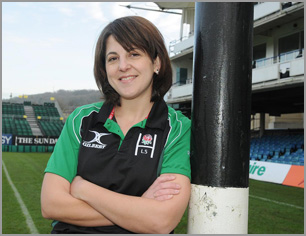 Welcome to my first referee's blog for wwwscrumqueens.com a view from the "middle of the pitch" that I hope you will enjoy and find informative.

This blog will hopefully provide people with an insight into the world of officiating, and not just at women's international level as most weekends I earn my bread and butter in the middle of a men's senior match, while also refereeing at junior level on Sundays when time permits.

As a match official living England, I am very privileged to have represented the RFU as a referee in 16 full women's test matches over the past four years, although I took up the whistle in 2001 after the team I played for unfortunately folded. Being a naturally gobby scrum-half, I thought I could do better (as most half- backs generally do) than the referee, so the gauntlet was thrown down by my local Society (Somerset) and I have never looked back.

Since then I have enjoyed eight seasons of refereeing and only wish I had taken it up earlier. If someone told me back in 2001 what opportunities would come my way through officiating, I would never have believed them.

As far as the guys are concerned, I ply my trade in National Three here in England, although I have been fortunate enough to referee some games in what is now called National Two (North and South).

Refereeing men's and women's matches presents different challenges, while both offer opportunities to develop refereeing skills that are equally transferable between the two.

And if I said it was easy I'd be lying - if it was, our beloved sport would be saturated with people wanting to referee. Like playing, or coaching, it's a journey full of ups and downs and hopefully through this blog readers will be able to gain an insight into why we do what we do.

And by the way, the ups far outweigh the odd down.

And I wouldn't swap it for anything - it really is the best view in the house!

Clare will shortly be launching an Ask the Ref feature on www.scrumqueens.com. Check back soon for more.