England Sevens and XV star Alice Richardson looks ahead in this blog to a busy autumn international programme. 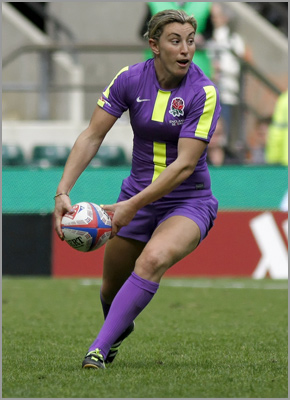 "After a summer off to recover from a successful international season with England it's now time for players to look towards the return of the Premiership, and then a very busy autumn international programme.

It should be an exciting and competitive 2012-2013 in the Womens Premiership with a number of teams really in with a chance at competing for the title and its great for the womens game to have an established and hard fought league.

Back to England, and after finishing last season on a high in Moscow in July, winning the European Sevens Series and qualifying for the Rugby World Cup Sevens, the England girls have had a couple of weeks off over the summer to recover and appreciate other athletes competing in the London Olympics.

That has certainly been inspiring to watch before getting back into some hard work with pre-season conditioning and club training.

As part of our pre-season preparations the England Elite Playing Squad had a four day training camp in July at Surrey Sports Park and that was a really physical and tough few days. Our coaches definitely put everyone through their paces, but it was good to see everyone come together as a whole squad.

There certainly were some sore and tired bodies the day after that ended - I think I made more tackles in four days than I normally do in a season!

However, the time off from playing over the summer has given the players the chance to come back into this season fresh and eager to get back into playing.

The last four weeks have involved a few hard fitness and strength sessions and I have enjoyed trying some different types training including my attempt at Cross Fit and Hill running in Richmond Park as well as working on some rugby specific skills in small group and one-to-one based sessions.

Looking ahead to the international season, we have got a busy autumn programme in both the XVs and Sevens game. England will be competing in Sevens tournaments in France, Spain and Dubai, while the XVs will take on France and then three games against the world champions New Zealand, and it will be the XVs where are primary focus will be before Christmas.

Playing in so many international fixtures is going to be a big challenge for the England squad, but it is also a great time for England to show their strength and depth. Its going to take a lot of hard work to prepare for these tests, but that has already begun!"

Richardson will be blogging regularly throughout the season for Scrumqueens.com