Tavo looks ahead to Dubai

Australian women's Sevens captain Rebecca Tavo joins our roster of bloggers with her first post coming just weeks ahead of the Women's Sevens World Series launch. Australia will compete at the Coral Coast Sevens in Fiji this weekend but Tavo will sit the tournament out with head coach Chris Lane taking a look at some young emerging players. 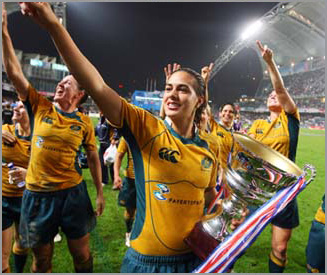 Another season, another chance to represent my country.

It's hard to believe that this time last year we were preparing for the first-ever IRB Women's Sevens Challenge Cup in Dubai.

It's even harder to believe that just three years ago, I was part of the Australian team that won the 2009 Womens Rugby World Cup Sevens.

So much has changed in such a short time and women's Sevens is only getting bigger.

It's hard to believe we're now about to embark on the first season of the IRB Women's Sevens World Series.

The announcement of the World Series is another great boost for us and the more regular competition and exposure women's Rugby can get, the better.

It's so exciting when people ask me about the new World Series, I love telling people about our expanded competition and how we'll be traveling to Dubai, China, USA and the Netherlands. On top of that, we're heading to Russia for the Rugby World Cup Sevens next year!

While the expanded competition is great for the sport, it also means we have to work harder as more and more teams become serious contenders.

The sport is in an exciting place right now and with the Women's Sevens World Cup just around the corner and the 2016 Summer Olympics not far down the road, teams are putting in serious work to prove themselves as international threats in this quickly growing sport.

Our team is no different, we also have to work hard if we are to stay at the top. Our side has changed dramatically since that historic night in Dubai in 2009 when we beat old rivals New Zealand to raise the first Women's Sevens World Cup.

While we still have experienced players in the squad, we have brought in a lot of youth over the last 12 months and exposed a lot of exciting new players, like Australian Women's Player of the Year Emilee Cherry, to international Rugby Sevens.

The injection of youth has been great for the squad, but we know there is a lot of work to be done to get everyone on the same page and ensure everyone is capable of competing at the elite level.

Throughout the year Australian Rugby Union has also undertaken a massive recruitment drive across the country and we are starting to see players from other codes show interest in playing Sevens because of the opportunity it provides to represent Australia at the Olympics.

We've got a young side and some of the new girls will be learning as they go, but everyone is working really hard individually to make gains and prepare for the season. Now it's just a matter of getting on the field together and getting the combinations working.

We're itching to hit the pitch in Dubai to represent our country and to do Australia proud!