Huge tests ahead for England 7s 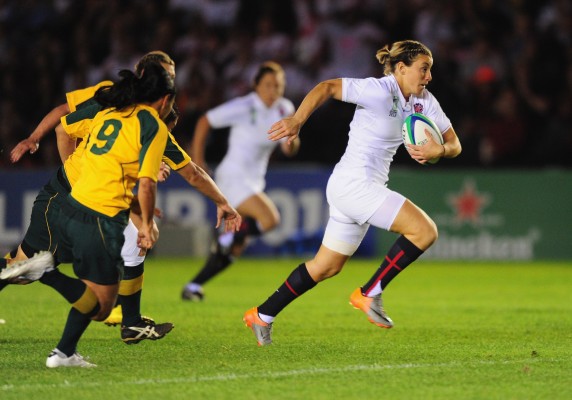 “We are in the middle of a busy build-up to the World Cup in Moscow this June and the games and tournaments are coming thick and fast.

First up is the London Sevens on May 11-12 and that is our sole focus now before we look ahead to the last leg of the World Series in Amsterdam and then the trip to Russia.

I missed out on selection to China in the most recent leg of the series, due to injury but am back now and really hoping to be part of the tournaments that are coming up.  I thought the squad that went to China did a really good job and though they were disappointed to lose in the final to New Zealand, there was a lot of positive things to take from it. There was some rotation in the squad and it was great to see players like Claire Allan and Rachael Burford return from injury and perform really well. Every competition we play in we are adding depth and experience to the squad ahead of Moscow.

Since the squad returned from China we spent most of April training in Hartpury at the Rugby Academy there. It’s a fantastic set up and we’ve been able to access great facilities. It is also nice to train somewhere different as it just brings a different aspect to our training programme rather than being based in the same place all the time.

We’re all looking forward to playing in London. We’ve got a very tough group in France, Spain and Australia and it will be perfect preparation for the World Cup. It’s exactly what we need. I played in London last year and we had an incredibly tight game against Canada in the semi-finals on the Twickenham pitch before beating Netherlands in the final. It was a great experience and one we’d love to repeat.

We can’t really look ahead to Amsterdam yet such is our focus for London but obviously New Zealand are now in pole position to win the World Series with their win in China. If they get to a semi-final that will be enough for them, but our plan will be just to go there and try and win the tournament and see what happens. Ideally we will meet NZ in the quarter-finals!

As we head into the really important weeks of the lead up to Moscow, camp is getting tougher and tougher.  As well as the 17 players training a couple of time a week there are others who come in from the wider group and who are really pushing hard as well. When Barry picked the 17 players back in November that was incredibly nail biting for everyone and knowing that only 12 will go to Russia makes the competition fierce. You can only take one or two payers in each position but selection is something that is out of my control so I don’t get too nervous about it. Barry does a good job at keeping us guessing!

One thing we do know now, is that once this summer is over England will have very strong depth at both 7s and 15s level. Watching the 6 Nations from the sidelines was hard for lots of us not involved this year, but you did see lots of players go out there and put their hands up and say ‘I am here, give me a shot’ and so when we get back to 15s later in the year it’s going to be incredibly competitive.

Lots of people question whether it was right to remove the 7s players from the 6 Nations squad but we want to win a World Cup and we were willing to take that gamble. Winning a World Cup is incredibly difficult and you take any edge you can in the lead up."