Sacrifices worth it for England

England star Alice Richardson brings us the latest from the England camp ahead of round two of the IRB Women's Sevens World Series this weekend. England's players are trainnig together three times a week in the lead-up to the World Cup this summer. 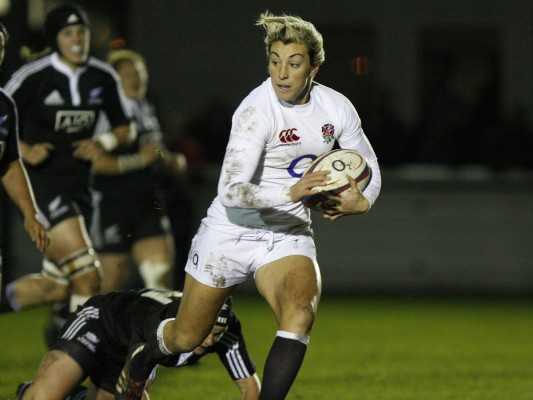 "Coming together as a squad on a weekly basis has really brought the England Sevens RWC training squad tighter as a team, and of course given us more training time together to develop all aspects of our game. We are now in a fortunate position where we are able to have speed and agility sessions, weights sessions, and metabolic conditioning sessions as well as our rugby specific sessions together on a regular basis.

We have had some hard training sessions which have included two anaerobic fitness tests. The anaerobic shuttle has of course been inflicted on us in addition to a new anaerobic test which involves a series of six reps to be completed as quickly as possible with multiple down ups, short sprints, cutting and longer sprints with your accumulative time being your overall score. These tests work you to your anaerobic maximum capacity and unfortunately no matter how fit you are it is always going to hurt, as you just run further!

In addition to the training time the time we now spend together is increasing our team cohesion and the squad is a tighter unit with an all-round better understanding of the game and each other as players. This is really important in Sevens; you become like a family unit and this can really help you pushing through barriers in the tough games.

Being self-employed, I have slightly more flexibility than some of the other players in the squad but it has meant my days out of camp become very busy to ensure I can work enough to sustain my personal training business and also complete the additional training sessions that are set for outside the 2 or 3 days we are together. It’s tiring and there are long days but I know everyone in the squad has made sacrifices to train as a squad together, each of us in different circumstances but when we are in camp, we know we need to be working hard and making the most of the time we have to train together.

Next up for the squad is the second leg of the World Series in Houston this weekend. We met on Saturday for a weekend of training and then flew out on Monday. We definitely have a challenge ahead of us, but we would expect that and definitely want that from a World Series tournament.

Every team is getting better and better and games are becoming much tighter and much more difficult to predict. Our pool in Houston includes New Zealand who won the first world series in Dubai so that is going to be tough, but we are going to take each game as it comes. We also play the Netherlands and Trinidad & Tobago so it is certainly going to be a tough start to round two but one the England girls can’t wait for.