The shape of things to come?

Rennes played Saracens yesterday evening in a successful “Top 8” challenge. Has the time come for an official cross-border club competition? 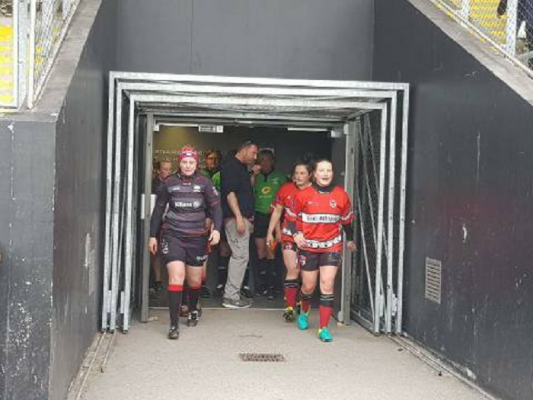 Rennes v Saracens. An isolated event, or a taste of the future?

The answer is a European club championship.

It is actually quite hard to find any widely-played European women’s team sport that does not have some sort of cross-border tournament. In fact, the only women’s team sports we can find that do not have officially-sanctioned international club competitions – apart from rugby – seem to be cricket and netball.

With netball and cricket this is understandable as they are not widely played outside the UK. But rugby has national 15s leagues in just about every western and central European country, and when it comes to 7s it is hard to find any country in Europe where the game is not played.

Overt demand for such a competition has not been significant, but it is a topic that is occasionally raised with us by clubs, and last night’s game between Rennes and Saracens gave just a small indication about how much interest there could be. That proved to be a terrific battle between two well-matched teams, with Rennes leading 29-5 at halftime before a great Saracens comeback fell just four points short.

One little known fact is that there has been a “Coupe d'Europe de rugby à XV féminin” – the current holders being French club Montpellier. The tournament was organised by FIRA (now Rugby Europe) nearly a decade ago… but only the French and Spanish champions entered.

On 22 December 2007 INEF Barcelona hosted the first leg of the first “final”, losing 31-8 to Montpellier and then going down 22-3 in the return the following April.

Despite the lack of interest – especially from unions in the UK and Ireland – FIRA persisted, and on 1st February 2009 Montpellier took on Spain’s Getxo, winning 19-11 in Spain before recording a big 82-3 win at home two weeks later.

And that was that. But it was all eight years ago – a completely different era from women’s rugby today.

It is quite easy to come up with objections to cross-border competition. Cost is the main one, though it seems unlikely that European roller hockey and lacrosse are richer sports than rugby, and the cost of travelling from Bristol to Darlington (or perhaps Toulouse to Rennes) is unlikely to be very different to that of crossing the Channel. Indeed, such are airfares, a trip to the south of France from Bristol might even prove cheaper, and Lille is only a couple of stops away from London on the Eurostar.

In addition, interest in the women’s game has never been higher. It is not unreasonable to suggest that an Anglo-French clash might attract media interest – in France at least – which might help to raise sponsorship interest.

Fitting games into the calendar would be more challenging, not least as it would require the Unions to work together – but they seem to manage that with a men’s game whose calendar is more crowded than the women’s.

A more serious issue might be the varying standards of teams. The size of Montpellier’s wins suggests a certain inevitability of French (or English) teams coming out on top.

But one-sided rugby is already a bit of a problem for most national XVs leagues. One of yesterday’s German national semi-finals was won by nearly 100 points, and while that may be an extreme example it is not exceptional. Four out of the last five French finals have featured the same two teams, and similar things can be said for most other nations from Scotland to Italy.

Having most national leagues coming down to a contest between the same two or three teams cannot be beneficial for developing players or the game as whole. Nothing kills interest (and stalls development) in a sport faster than inevitability. Giving these nationally dominant teams an extra challenge would hardly do them any harm, and if some nations are significantly stronger than others having lower ranked nations play in preliminary rounds would be one solution.

And anything that can raise the profile of 15s cannot be a bad thing. This may be the year of the best, most high-profile, Six Nations ever and the year of the World Cup, but it is also the first year since 1994 that there has been no international women’s 15s championship. For the leading half-dozen rugby nations 2017 is a 15s feast – but for everyone else, it’s a complete famine. Sweden and Germany have reformed their national XVs… and now find themselves with nowhere to play.

Officially the idea is not on the agenda in key places like Rugby Europe (though we are told that it has been raised). When we asked them we were told that “the Women’s committee has been working on the European development considering the gap for women’s rugby in Europe.  The last Women’s European Championship played in Madrid last October shows an evolution is necessary.”

World Rugby said almost the same thing when we asked them in October. We acknowledge there is a problem for women’s 15s, but have no plan (World Cup aside) to overcome this.

One last thought. No major initiative in the history of women’s rugby has ever come from the main rugby authorities. From national leagues to European championships to world cups, they have all come about due to pressure from outside the union boardrooms. The only possible exception - the World Series – proves the rule as in truth it only came into being due to pressure from the IOC. If women’s rugby wants more events like Rennes v Saracens then waiting for national unions or Rugby Europe to organise something is unlikely to be successful.