Niamh Briggs, who is hopeful of appearing at the World Cup with Ireland in Moscow, looks back on a whirlwind few months. 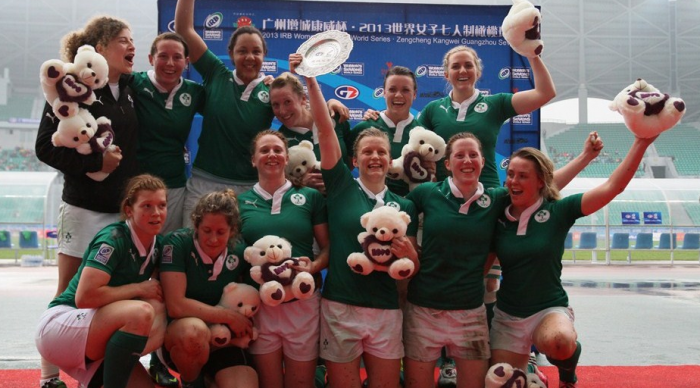 It has most definitely been the craziest few months in relation to women's rugby in Ireland.

Since winning the Grand Slam on St. Patrick's Day (it really was meant to be!) the profile of the game has absolutely rocketed and the support of the public has been phenomenal.

That very cold and wet day in Parabiagio, Milan will be etched in memories forever more. It was a day that players and management wrote themselves into the Irish Rugby history books and one that will not be forgotten in a hurry.

One thing that sticks out in my mind from that day, besides the cold, was the supporters that travelled over to the game. Friends and family, players past and present and new supporters who joined this amazing journey during the tournament really came out in force and not for the first time helped us over the line and drove us on to the final whistle.

The fact the RTE our national television station came and filmed us live for the first time added to the already tense occasion. On days like this it was all about the result and not the performance and even though we felt we didn't play well the relief at the final whistle was evident for everyone to see. And when our bodies warmed up and came back to some kind of normality after the cold it was a result that was celebrated in style.

It probably still hasn't sunk in as such for many of the squad and won't for a while but the most pleasing aspect has been the response from the public and the ever rising profile of the game here in Ireland. Hopefully this win will encourage more girls to get out and play the game and keep the ladies game in Ireland on an upward curve.

Our hosts Italy were incredibly gracious and celebrated with us with gusto. Our supporters were unbelievable, frozen, wet, singing, cheering, ecstatic and even a little lunatic. (I’m thinking about the two supporters in particular who headed for the Tattoo Parlour and had their cheeks tattooed. Not their faces by the way). The scenes of jubilation from our hard strapped supporters were incredible. It wasn’t a day for dignified hand shaking it was more like a rabble that was left loose and mad hugging and kissing in the mud and sleet was the order of the day. Particularly happy for the supporters who had soldiered for so long from the start of ladies rugby in Ireland and came to Parabiagio to share with this dream that actually came through. I’m won’t mention names for the fear of forgetting somebody but we had supporters who came not just from Ireland but New Zealand, France, Scotland, Wales & England. Legends in their own time.

For nine of the Parabiagio squad there was no rest. Arriving home to a rapturous reception in Dublin Airport on the Monday they then flew directly to Hong Kong as Ireland took part in their first involvement in the Women’s World Series in China. It is a true testament to these girls that the squad managed to arrive home with the Plate in tow and taking a few big scalps on the way. While the girls were competing in Hong Kong and China I went straight into 7s mode of training in order to catch up with the rest of the squad for when they returned home. The training was tough and a little different than what I was used to in the 15s but news of the girls results from Hong Kong and China really spurred me on.

My first Irish 7s tournament was the London Invitational and it's was definitely a shock to the body. It can often be hard to replicate match intensity during training and as in any other sport you train to play matches and so this was a brilliant experience for me. As a squad we found the going tough on the first day but I suppose that's the beauty of 7s as it allows you to rectify your mistakes almost immediately and we did well to come back on the Sunday to win the Plate.

As we stepped up our preparations for Moscow, the European 7s was an ideal way for us to get more game time against quality opposition. It was another tough competition but one that I enjoyed immensely. It was great to see the squad coming together and working on improving our game all the time. We understand that we are relatively new to the game but that does not lower our expectations and the need to get better all the time. We had some tough games and again did well to come away with the plate win against a good and organised Dutch side.

So far this 7s experience has been amazing and one that I am thoroughly enjoying and it's great to see and play against teams we wouldn't encounter too often as it broadens your playing experiences. I also love that the weather is usually sunny (I hope I haven't cursed this!!!) and hot and that given the nature of the tournaments you usually get a chance to rectify mistakes fairly quickly.

It's a new game for us and one that both I and the rest of the squad are constantly learning about. One thing is for sure that by winning the Grand Slam and the improving 7s rugby programme the future of Irish Women's Rugby is on the way up which can only be a good thing.

Ireland fullback Niamh Briggs is a key player for her country, with her boot and all round game making her one of the top back three players in Europe.  A talented Gaelic footballer with eight All-Ireland medals from underage to senior level with Waterford, Briggs only started playing rugby as a bet with another girl after a summer tag session