“Malice” aiming to go out at the top

French captain Marie-Alice Yahe (Malice to her team-mates) is determined to finish her career on a high after the World Cup next year. 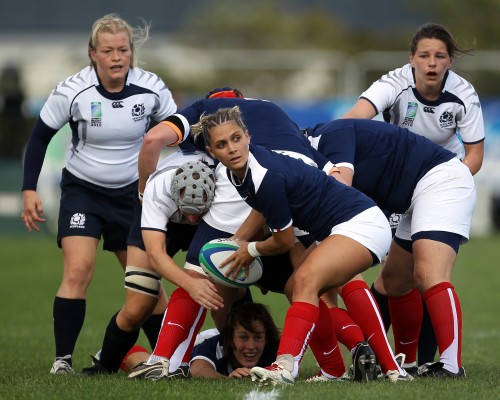 The face of the women's game in France, Yahe is a top performer on the international stage and at this week's 6 Nations launch, she admitted that she is eyeing a break from the game next year.

“It will be a total break from rugby and it needs to be because I love the game too much and I know I will be drawn back in again if I don't take a complete step away."

The reason behind this is her decision is simple - the French scrum-half wants to start a family, having become engaged to France and Stade Toulousain fly-half Lionel Beauxis, a year ago.

But while her other half can play the game for a living, Yahe, on the other hand, has had to put her career on hold since she has been captain of the national team as well as leading a rebuilding process of her Club team Perpignan.

Currently in fourth place in the Top 10 there is a real danger that they might not make the play-offs, this year

“I am hopeful that we will finish in the top four, but we are rebuilding and with a young team it is a challenge. We have several very promising young players who will be the future of club – Julie Billes,  played her first game for France against the USA recently. Then there is Wendy Divoux, who is a U20 international hooker, and finally 19 year-old prop Clémence Riere, who is injured at the moment but is a very talented player”.

Turning to the national team, the key game of the season will be France’s visit to Twickenham to play England she says.

“I have great respect for England. Even without their Sevens team, they have such depth that they are always a great challenge, especially at Twickenham. We are be very proud to be playing at Twickenham but the occasion won't get to us."

The squad for the opening games, against Italy and Wales, seemed to lack a few major names, most notably Sandrine Agricole, but Yahe says she will be back by the time they side faces England.

“She will be back. We are giving some of our younger players a chance in the opening games, before playing against England and Ireland in rounds three and four. This 6 Nations is very important and good performances are vital in building confidence in the team”.

And finally, where do Marie-Alice Yahé loyalties lie?

In the quarter-finals if the Amlin Challenge, Perpignan have been drawn against Stade Toulousain – who will she be supporting?

“I support the women of Perpignan, but for the men - it has to be Toulouse!”

“I have great respect for England. Even without their Sevens team, they have such depth that they are always a great challenge"