“Target for Italy in 2013 is World Cup qualification”: Gaudino

“This season is all about qualifying for the World Cup”, says Silvia Gaudino. “And, after our Autumn tests against the United States and Spain, we are better prepared than ever", adds Andrea Di Giandomenico.

We talk to captain and coach of the Italian team as they prepare for a crucial year. 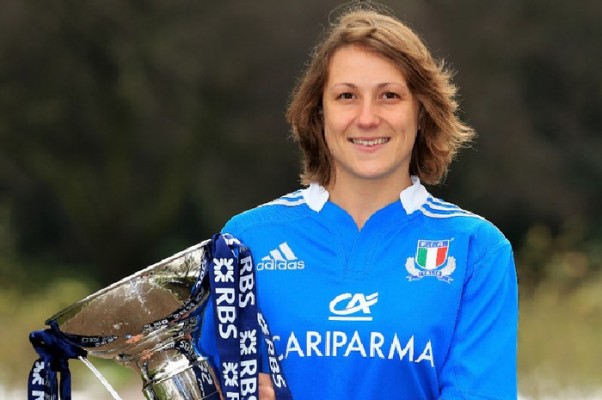 "An Autumn test series was new thing for us", said Gaudino, "and we hope we can continue with them. We have had a very busy twelve months and we are very pleased with the opportunities we have had develop the team: The two Autumn test matches have been very important in helping us improve the readiness of the team for the first match".

"The most important aim this season is without doubt the achievement of the 2014 RWC qualification", continued team coach Andrea Di Giandomenico, "but a good performance in the Six Nations tournament is important too. It would mean that we could directly qualify without having to worry about the tournament in Madrid in April - which will be very hard in my opinion."

Looking back on their Sevens World Cup campaign, both captain and coach agreed it had been a useful experience - despite Italy's failure to progress. "Although we failed to qualify for the Sevens World Cup last season I am still satisfied with the performance of the team", said Di Giandomenico. "Although most of the squad is the same one as the last year’s, the sevens helped the young players grow and increase their confidence with the game - and two have made the squad for the Six Nations. Michela Sillari is in the backline, and Marta Ferrari (a former junior European judo champion) is with the forwards."

“A strong set of forwards is essential", added Gaudino (who plays at no 8), "and we were pleased with our forwards’ performance in the Autumn tests – but we know that France and England will be stronger and against them we have to play a different sort of game.”

Di Giandomenico was also encouraged with how the game is developing in Italy is growing: “We now have a 12 club national league, and another 50 teams playing in a development competition below that – with the best players feeding into the top 12 teams. I hope that we can also launch a sevens tournament this season, and possibly an U20 team in the near future. There still is no schools rugby, but an increasing number of girls are playing junior rugby. Even so most players – including perhaps half of the current squad - do not start playing until their teens or later." “I did not start playing until I was 19”, added Gaudino.

Both agreed that Italy have clearly improved year on year. “The merit may be attributed to the girls", says Di Giandomenico, "we can see how they increase their confidence the more they play. Behind this is a federal structure that is creating the best conditions for good growth and development. All of that work is starting to achieve results.”

"A good performance in the Six Nations is important. It would mean that we could directly qualify for the World Cup without having to worry about the tournament in Madrid in April - which will be very hard." Di Giandomenico.