This weekend sees New Zealand and England meet in the 1,000th women's rugby test match. But, before that, and with the help of the Leo van Herwijnen Rugby Foundation, we are now able to rewind 31 years to June 1982 - and the first test match. 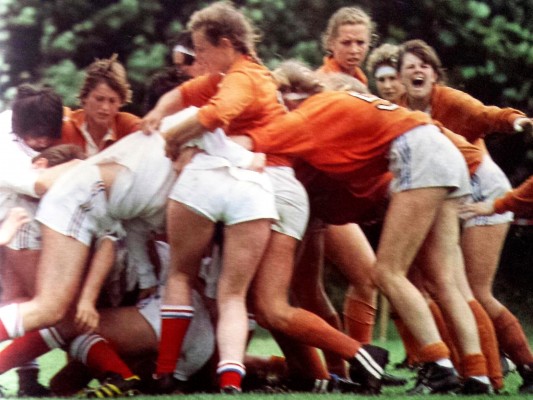 The game came about as the result of a meeting about women's rugby held in France in January 1982 between Henri Flechon, from France, and a delgation lead by Leo van Herwijnen, from the Dutch rugby union - the NRB. The main aim was for the Dutch to find out about how women's rugby was organised in France, but Henri was particularly impressed by the way the NRB had recently officially recognised women's rugby - a long standing aim of French women that would not be achieved for another seven years.

Returning to the Netherlands, the Dutch enthusiastically put into effect everything they had learnt in France, and also decided to form a national Dutch team. 1982 was a major year for Dutch rugby, the NRB was 50 years old, and as part of the celebrations it was decided to invite the French to send a team.

This was all agreed barely two months before the date of the game. Officials from tiny, all-amateur, Association Française de Rugby Féminin (AFRF) accepted the invitation immediately. The Dutch organised trials and selected a team by the end of April before arranging a number of training games - many of their players having little or no experience of full 15-a-side rugby!

Friendly and celebratory the game may have been on paper, but on the field it turned out to be a  tough, uncompromising game with the hosts putting the eventual French victory down to gamesmanship as much as rugby ability. However, there were clearly no long-term disagreements (the "third-half" detailed in the report below possibly having a lot to do with that) as a return fixture was quickly organised, and the teams continued to meet annually throughout the rest of the decade.

For the first game, a Dutch news magazine - Panorama - sent reporter Henk Hansen to the report on proceedings. The result was a colourful article, mainly reporting the game from the Dutch point of view. It is not quite the style of reporting we might use today, but it remains the only detailed report on this historic occasion: Hooker Frieke van Schouwen is angry. Angry with the sweet looking but dastardly Frenchwomen. Kicking, pulling and hitting ... that they can do, Frieke thinks grimly. Sweat pours over her body and her orange shirt is soaked. Mud sticks to her knees - and position is 0-0

Zero-zero! Still - now well into the second half! And the French are determined to win, because they can not fail against the inexperienced "rugby-squirt" that is the Netherlands. From Paris to Toulouse, for years they have been playing competitive rugby, as a result of which the French women are much subtler and more hardened than the heroines of the Low Countries.

In France, men watching games do not chat about thighs - because they are watching rugby. The French people accept women's rugby as a sport. Some gentlemen from the Dutch Rugby Union, on the other hand, see the idea as just a bit of fun. A real sport for women? "Noooo, rugby is a man's world and a man's game," say the men behind the bar. In a way they are right, because Dutch women's rugby is just a young puppy compared to the French: seven years ago, the men's rugby club at Wageningen had its fifth anniversary and the board decided to give the party at light-hearted extra: they organized a women's rugby match. Girlfriends, aunts and neighbours of the Wageningen men were rounded up, given a bit of training, and dropped in the middle of the field with a rugby ball!

Yes, those women gave the party an extra dimension, but ... the girls loved the "freak show" so much that they continued to train after the party. The girlfriends, aunts and neighbours of the Wageningen sought out women from elsewhere in the country and then arranged matches. It was a steep learning experience for women more used to holding tennis rackets. Contact rugby with hands gripping legs was something entirely new.

"Women are more wary of contact than men," explains Dutch captain Lisa Groenendijk. "But I come from a family with just girls and we fought all the time. You had to be hard - I had bruises every week.".

Hard! And only if you are hard do you stand a good chance of defeating those damned French! Again and again they try to show that Camembert cheese is stronger than Gouda! They fight to get this egg-shaped ball over the goal line and thus score a "try", and with it four points.

"We do not have to take this!" Frieke angrily shouts to her team. The game is deep in the second half as quiet blond Dutch wing Odet Zijlstra is felled by a French tackle round  her neck. Anything goes at rugbv, you can tackle everywhere - except in the neck. And if your opponent does, you get angry! "Don't moan about it," shouts Frieke "JUST GET BACK AT THEM - HARD!!" The face of Frieke is set in a mask of determination: she is determined to show the men on the touchline that women can play rugby. In her mind echoes the song that later, after the game, will be ring around the bar: "I am a woman, sir, that you have already seen, but I'm even more than you might know."

Later, during the grueling beer-drinking race in the so-called "third half" (which is held after each rugby match) this song blares from the throats of the Dutch women. "I now run, sir, I now fight too. sir, I don't cook. As once I was, I will never be!!

And so it is! Women are changing! Pretty blonde Odet - the one who was just floored by the French blow to her neck - combines a touch of feminity (plucked eyebrows and mascara) with a dash of masculinity through her reaction to the foul and her stained knees. Woman of '82, Odet is soon back upright. She rubs a hand over her sore neck, but carries on.

Now she runs, leaving Fneke behind. The ball is passed to France's Isabelle Decamp - a slender woman, quick and agile. The last line of defence is the captain, Lisa, and she tackles Isabelle hard: intertwined they collapse to the ground. "Merde!", curses the floored Isabelle, who has seen the ball slip from her hands. Fortunately for her it bounces in the direction of a countrywoman, who picks it up and touches it down behind the Dutch line: a try as it is called. 4-0 for that cursed French!

And, now the French start to slow down the game. At each tackle and ruck they take their time.

France's flamboyant centre Nicole Frayste wastes more time - after an innocent impact a full five minutes is lost getting her off the field on a stretcher. Thus varied French tricks all prevent Orange from leveling the score. When later the referee calls an end to the match, the Dutch girls sadly run from the field. "I now run well, sir, I now fight, sir."

Lost! To the French, by the smallest of margins!

The depressed mood does not last long... and the future looks rich for the Dutch ladies rugby team. To brighten the mood we present to them a bottle of original, unadulterated "Panorama" champagne! The Dutch ladies will at least win the "third half"!"