With the world of rugby still far from back to normal we have decided to hold back on our usual annual awards again, but instead highlight the people and events that had the most impact of the women's rugby in 2021. 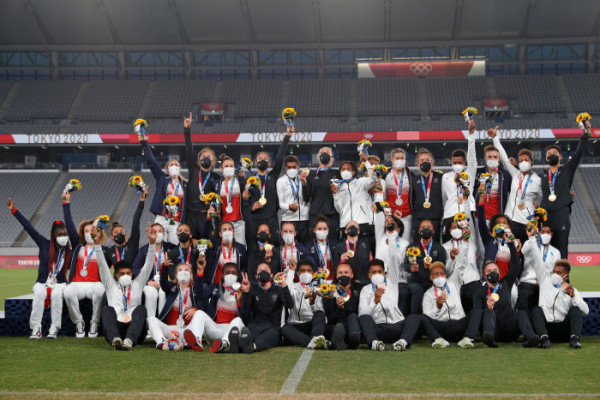 From the ongoing challenges presented by the pandemic, to a brilliant Olympic games, to significant stands taken by players in defiance of their own governing bodies, 2021 was a year to remember in the women's game.
We look back at some of the game's major moments and stories.

Covid's continued effect
All of the events that follow happened under the relentless effect of the Covid-19 pandemic. The 2020-21 World Series was cancelled, the World Cup was postponed, the Olympics took place without spectators, games and tournaments were cancelled or sometimes took place with undercooked teams. But even so, international rugby has started to return in most parts of the globe, the only significant exception being east Asia where the World Cup qualifier was endlessly moved back through the year, with Japan eventually granted a place in New Zealand without playing, while for Kazakhstan and Hong Kong the clock is now ticking as they have one final chance to play their play-off on 13th February.

Players find their voice
Ireland most recently demonstrated the power of a collective voice, with their letter calling for better from their own governing body hitting hard across the Irish media, political and sporting landscape. That most of the current team were involved says something about the strength of their feelings, and though we do not yet know what it will change, this was a powerful moment in the women’s game, and there were many others like it in 2021. In Wales, the intervention from a large group of former players and captains has been a key catalyst for change, which has included the introduction of some full and part-time contracts. In New Zealand the introduction of Women in Rugby Aotearoa has started to surface debate on significant issues there on contracts and player wellbeing; and in Canada some 37 players joined forces earlier this year to speak out about alleged ill-treatment. Women in the game are no longer afraid to stand up and say – enough is enough.

A new place in the calendar for the Six Nations
Not everything coming out of this pandemic has been negative. The enforced move of the Six Nations to later in the spring proved to be a great success. Concerns that the women's games might suffer from being played outside of the publicity whirl that is the men's Six Nations proved to be unfounded as the women's games received unprecedented coverage. The shortened format was far from perfect, but still gave us a showpiece final in the spring sunshine, though the game itself was far from a classic - France and England had barely been troubled in the lead-up and looked distinctly rusty. The slot in the calendar is being retained in 2022 but returns to the old format and France v England is retained for the last round. Bayonne will be the place to be at the end of April!

The fall of AS Bayonne
Bayonne, the club, also came up with one of the more negative stories of 2021. The collapse of French Elite 1 team in November was an example of how sometimes there are steps backwards. Here was a club that was playing at the top level of French club rugby, that had nurtured at least half a dozen top international players, deciding not to invest in their women's team. And when the women complained, the club pulled them from the league. It was an example of how when clubs or unions are dominated by men it can be too easy for women's rugby to be seen as an optional extra.

Return to 15s and test debuts
Five nations (Burkina Faso, Cameroon, Tunisia, Senegal and Cote d'Ivorie) made their test debuts in 2021 - a total only beaten in the history of the game in 2006 and 2007 (when there were six). In addition, Portugal returned to test rugby after 26 years away, Namibia after a gap of eight years, and Belgium after three years, while Andorra and Gibraltar made their XVs debuts against non-international opposition. After so many years where the fifteen-a-side game's very existence looked threatened by sevens, 2021 was a massive boost to the traditional form of the game.

World Cup qualification providing nail-biting tension
With the World Cup on the horizon, so many games in 2021 had much at stake, producing the highest drama even for neutral spectators. Eight test matches were decided by a single score, and four of them were World Cup qualifiers. First in August Colombia beat Kenya 16-15 in a heart-stopping match in Nairobi. Then the following month the European World Cup qualifier resulted in an incredible tournament with three games decided by a try or less. On the first day Spain beat Ireland 8-7, only to lose to Scotland a week later by just 27-22 before the incredible finish to the tournament saw Scotland beating Ireland 20-18.

29,581 at Twickenham
Admittedly the crowd had begun their journey expecting a double header, and were assured they would be reimbursed whether they attended or not, but even so the Barbarians v South Africa blew the women's record for crowd for a ticketed standalone game out of the water, and moreover ensured prime time Saturday afternoon coverage on the BBC's main channel, While not the perfect fixture in the circumstances - the Barbarians winning comfortably by 60-5 - it gave unprecedented exposure of the women's game to rugby fans many of whom will not have seen a full women's game before, and the resulting coverage was all very positive.

Olympics worth the wait
It was a year late, with no crowds, but the Olympics lived up to the hype with perhaps an even better a tournament than that in 2012. New Zealand deservedly took gold, but it was far from plain sailing, with the game of the tournament being their semi-final overtime win against Fiji. And it is certainly Fiji who made the most of it post-Games, with two World Series finals, their Olympic bronze has taken them from promising also-rans to World Series title contenders and changed how women's sport is seen in their islands. Ruby Tui's brilliant BBC interview, Kenya's Janet Okello having a true breakout tournament, Great Britain defying their lack of funding - this Olympics had highs on and off the field.

The demise of the Black Ferns
Even with the fact that they hadn’t played in over two years, the Black Ferns end of year tour was a disaster, a brutal reality check and is now the subject to an independent review following allegations of poor treatment of players by the team’s head coach. The four heaviest defeats in history against England and France tell you all you need to know about how far the team appears to have fallen, and with a home World Cup on the horizon, time is running out for them to catch up with those two teams in particular. Although losses were likely on the tour – the scale and manner of the defeats remain a shock.

England's dominance
A few years into fulltime professionalism, England look every bit the world’s best team right now. They ended 2021 having scored 385 points across 2021, while conceding just 73 and next year they will have the opportunity to break their own record for consecutive international wins as they also they search for a fourth Six Nations Championship win in a row – and then the small matter of a World Cup for which they are now favourites. Likely hosts for the next World Cup in 2025, the momentum in the women’s game now is all England’s

A long way we have come, along way still to go
Finally, a reminder that while women's rugby came a long way in 2021, it stil has a long way to go. Two times European Trophy champions Czechia surprised everyone in 2021 with their somewhat eccentric and random shirt numbering in his season's tournament. However the reason was far from amusing - the Czechs simply did not have any funds to buy kit of their own and had to borrow from their men's senior and age group teams, players taking the shirts that fitted best. When the 10th best team in Europe has to beg for playing kit the game still has a way to go.