Today – 13th June 2012 – women’s international rugby celebrates its 30th birthday. On this day, in 1982, the Netherlands played France in the first ever women’s rugby test match, at Sportpark Strijland in Utrecht in a game organised by the Dutch Rugby Union as part of their 50th anniversary. 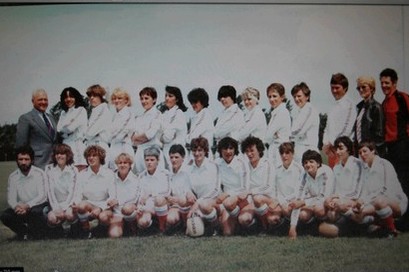 Womens league rugby in France was already 10 years old, and several Dutch universities also had teams especially the University in Utrecht where the game was so popular that a womens team had been formed at the towns main rugby club, which is probably why Utrecht was chosen to host the game.

Once the invitation was made the French womens union (it was not yet part of the FFR) had very little time to choose a team, and absolutely no funds to pay for it. The 22 players selected had to pay for everything - their own transport to the game, their own hotel bills, even the shirts they would play in.

Very little information remains about the actual match. We have a couple of pictures of the French team (above left), and we know the score (France winning by a single try, 4-0), but not much more survives. Even the ground they played on is now under a motorway.

But the game was clearly a success. A return match was organised in France the following year, and in 1984 the Sweden joined in, followed by Italy a year later. France crossed the Channel for the first time in 1986 to play Great Britain (winning 14-8 in Richmond), and the following year the red rose of England appeared on a womens rugby shirt for the first time alongside the Prince of Wales feathers.

Since those early days the game has grown astonishingly. Over 100 countries around the world now play international womens rugby at either 7s or 15s, and as if to illustrate that the 950th test match will be played on Friday about as far away from the canals and windmills of Holland as it is possible to be on the other side of the globe, in Manilla in the Philippines.

It is a remarkable fact that, in terms of the number of nations playing the game, rugby is now easily the worlds second largest womens team sport. Over 85,000 adult women play the game worldwide (just under one rugby player in 10 is now female) and, with the push given by the games inclusion in the Olympics, countless more girls are taking up the sport.

All this has been achieved in little more than the playing life of a single player girls who started playing in 1982 could still be playing today. Today, from Saskatoon to Sydney, girls as young as 6 or 7 years old play rugby at clubs and schools how big will their game be when womens rugby celebrates its 50th birthday?

The growth of the game - in figures

*The individual results in all women's sevens tournamets are not always published - these are the minimum number of games each team has played.

*The individual results in all women's sevens tournamets are not always published - these are the minimum number of games each team has played.