6 Nations: Where the teams stand

With rounds three of the women's Six Nations approaching, Ali Donnelly and John Birch assess how each team is progressing so far. 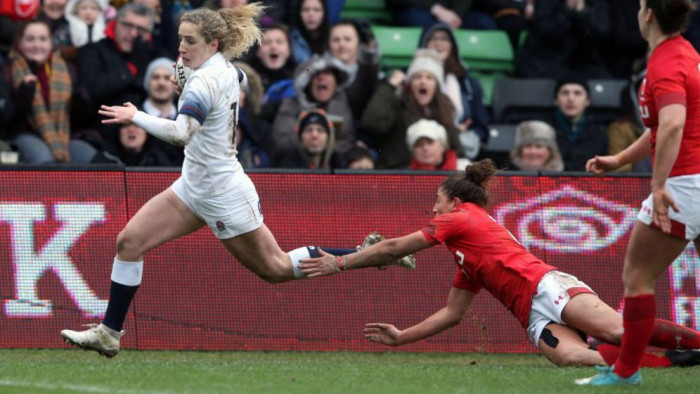 France looked like their usual fragile away selves in round two and have been inconsistent over both games so far, while doing enough to win with something to spare.

Things were not going their way in the cold and wet miles from home in Scotland, but they could have folded, as we saw them do against Italy and Wales in recent years, but they just about hung in there and they will take plenty from that.  Against Scotland they also had a bit of luck on their side. If the Scots had scored with a player up before halftime the outcome could have been very different. Instead France go into a home game against Italy on the back of some momentum and with key players in good form. It's a positive combination.

In the backs Pauline Bourdan is really beginning to find form at 10, though England's back row will make life very challenging for the diminutive fly-half in round four, while Jade Le Pesq and Caroline Boujard have been excellent - with Boujard in particular having a brilliant tournament on the wing. At home France can be mesmerising - so that round four clash will be a highlight of this competition, as they will surely be too strong for Italy at home this weekend.

Scotland had a plan against France,  kept to it, and it very nearly came off. It is a shame for them that their most winnable games are away this season and despite performing well in the opening two rounds, it isn't out of the question that they will fail to win a game while legitimately considering it a decent competition given the progress they are making under Shade Munro.

And the undoubted improvements are there. The excellent second half performance against Wales, the strong first half showing against France, some positive attacking intent and some great from from the likes of Chloe Rollie, Lisa Thompson, Sarah Law and Jade Konkell all point to a much better Scotland team - but the 6 Nations doesn't give sides many second chances, and Scotland must become better at taking theirs from the off and holding their commitment to defend for 80.

England up next is tough off the back of the French game but a good performance means they can at least travel to Ireland with realistic hopes of getting a first win.  They are getting there.

Scoring 50 unanswered points without being spectacular against Wales, England have been so far ahead of the opening two teams they have played (notwithstanding an iffy first half against Italy) that it is hard to judge how good they are.

Perhaps we will only find out when they face France. Probably most positively for England is the form and development of their young players at an ideal time three years out of a World Cup. Sarah Bern, Ellie Kildunne and Zoe Harrison are just three names who could well be vital to England's chances in 2021 and that they are being given so much game time now and showing well will be pleasing for England's management. Key this year too has been the form of their experienced players,Katy Daley-Mclean, Danielle Waterman, Tamara Taylor and Sarah Hunter are lynchpins while Poppy Cleall has been excellent.  It is hard tp the point of impssible to see beyond them for the title.

There is some solace in the fact that they have now got England are out of the way and they can concentrate on games they can win - which could easily be any of the rest. Wales did not seem to have any answer to England at all and though they will surely plough through some post match analysis, perhaps they would be best consigning this tape to the bin and moving on.

Positives have included the performances of captain Carys Phillips in the opening round, the return of key players like Sioned Harries and the impressive defence of Jessica Kavanagh-Williams on the wing. But Wales need more. Back to back games against Ireland and Italy bring a realistic prospect of two wins - though they will be more fancied against Italy. Key issues to solve include their discipline under pressure and their ability to convert opportunities. A tough two weeks of prep ahead for a young team that is building for the future

While there is no disgrace in losing to France away, the manner of the defeat will have been a real worry for Ireland and though they were not overly convincing against Italy, the win will have come as a huge relief.

Unlucky with injury, Ireland have now lost Ciara Cooney and Alison Miller - both experienced and valuable players - and in a  team which is already lacking experience, coach Adam Griggs could sorely have done without seeing them carried off.  With Niamh Briggs still settling into a new position at 10, you do feel that this Irish team will improve the more they play together with Ciara Griffin, Lindsay Peat and Claire Molloy leading the charge up front.

It is in the outside back space their inexperience could be telling, although Katie Fitzhenry put in a positive performance at outside centre at the weekend and should take confidence from that. With home games against Wales and Scotland to come, Ireland have a great chance of taking out two wins - results that would return a positive Championship given all the challenges they took into it.

The Italians have shown in patches what a good side they could become but there is something rather inevitable about their sheer inconsistency.

A brilliant first half against England in which they more than held their own, and flashes of excellence and doggedness against Ireland which suggested they could go on and win the game or at least take a point, are reminders how much they have come on, but they will need to work out a way to develop the consistency that is eluding them. In Manueala Furlan and Sara Barratin they have two genuinely world class players and debutante Giada Franco was brilliant in her cameo against Ireland - we will surely see much more of her.

The final two games against Wales and Scotland offer them a great shot at points.