Are there really 1.5 million women players?

More countries field international women’s rugby teams than any other sport other than exception of soccer. Since rugby rejoined the Olympic family the number of countries playing international rugby has rapidly expanded, with over 100 nations now playing every year. Women’s rugby is a great success story – but what does this means in terms of boots on the pitch? How many actual women rugby players are there? Where are they? And is there any link between player numbers and international success? ScrumQueens digs out its calculator, boots up its spreadsheet, and tries to find out. 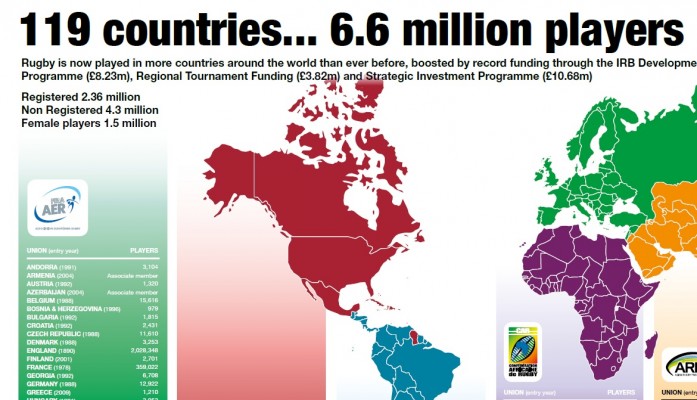 The answer seems to be easy to find. The IRB recently published a poster which says (along with the fact that there are 6.6 million players in total) that there are "1.5 million female players", and at the Women’s World Cup launch in January IRB Chairman Bernard Lapasset said “There are now almost 1.5 million women and girls actively participating in Rugby in countries on every continent.”

So does this mean that an impressive 1.5 million women playing competitive rugby? No, it doesn’t.

The key word is “participation”. This, it quickly turns out, is not a synonym for "players" and certainly does not mean that this many women are playing rugby, at 15s or 7s. It also does not mean that they are all adult women. What this widely quoted number means is that this many women or girls have taken part in some sort of rugby-related activity (including tag, touch or beach rugby) during the year.

For example when you dig into the data, you find that over half of the 1.5 million (805,400) are actually English and American girls aged 5-12 who are not registered players at any rugby club. And why are they included? In the case of England because tag rugby is very popular in English primary school PE lessons, not least because there every spring there are tag rugby tournaments for schools across most of the country. Similarly the bulk of the 125,800 “unregistered” English teenage girls are included almost certainly because team ball sports are a compulsory part of the English PE National Curriculum, and many schools introduce girls to the game as part of a five or six week module.

This is not to suggest that the IRB are deliberately inflating the figures. The data comes from the individual Unions, and follows each Union’s normally government-based definition of “sports participation”. What is more all sports do the same - for example swimming is one of the highest “participation sports” for women because all official statistics include anyone who has recently swum – anywhere - not just the tiny fraction who have swum competitively. If anything the IRB’s count is probably on the low side as, for example, New Zealand has not provided any estimates of its unregistered participants.

So the 1.5 million figure looks good, has some factual basis, is useful for making comparisons with other sports, and so helps sell the game to the IOC and sponsors.

However as a measure of the game’s health is it useful if more than 60% of those included are girls participating in a "rugby-related activity" because their PE teachers tell them to?

At the very least it is a huge hostage to fortune as it so dependent on the school PE policies of a single country, but more importantly it masks the success (or otherwise) of any initiatives designed to increase player numbers, because with actual rugby players forming such a small fraction of “rugby participants” any rises or falls in numbers are lost in the ocean of English and American schoolgirls.

It also does not tell us where the most rugby players are really to be found. However, by digging still further we now know. And we will let you know... tomorrow.

So does this mean that an impressive 1.5 million women playing competitive rugby? No, it doesn’t.