The busiest ever Autumn international programme is over. Some 21 national teams played 29 games, including 24 tests - half of all the tests played in the entire year. What did we learn? 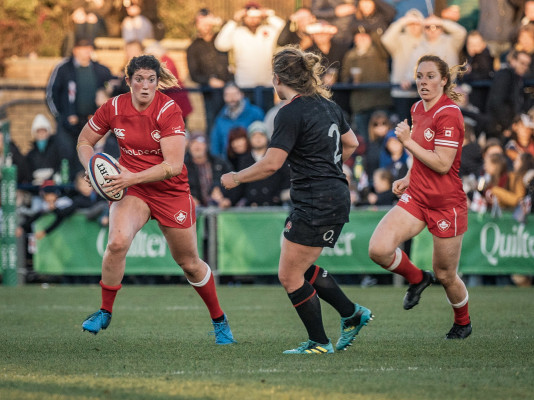 The six weeks took us from Amsterdam to Glasgow, by way of Chicago, Calvisano, Helsinki, Lautoka, Toulon, Newbury, Cardiff, London, Villajoyosa, Dublin, Cobham, Doncaster, Yverdon, Prato and above all Grenoble.

It brought us a return to test rugby by Tonga, after 12 years,, Samoa and South Africa, after four years;  first test wins for Tonga and Czechia; and 100% records for England, Fiji, Italy and Spain. Not to mention one of the greatest women’s test matches ever.

But what are the main things we learnt from this intensive programme of international rugby spread across three continents?

“Humble and Hungry” is the French team’s maxim – they say they still have much to learn, but are hungry for success. Their two test series with New Zealand demonstrated this – slightly overawed in the first test, they failed to take their opportunities, but they learned from it and lead from start to finish in an awesome second test to record a first ever win against the Black Ferns.

Is the next Six Nations a foregone conclusion then?

Play like this again and it would be, but France have performed brilliantly at home before, but failed to do so away from home. And the likely decisive game with England will be in Doncaster.

Fiji retained their Oceania crown, perhaps unsurprisingly, but it was how they did it that was most impressive. Unlike in 2016, the Fijiana called up most of their most experienced sevens players, and - after a careful start in their opening game - dominated the tournament. Two years ago an understrength, inexperienced Fijiana team – lacking those sevens stars – were well beaten in the Asia-Pacific qualifier by Hong Kong and Japan. If that is to be their route for 2021 a rather different outcome is possible.

3. England fly under the radar, for possibly the last time.

With France and New Zealand hogging the limelight, England's Autumn campaign fell almost under the radar by comparison. England are in a fascinating position - right on the cusp of becoming the first team to go fully professional for the long term in January, and still grappling with the challenges of trying to run world leading 15s and 7s programmes. Because of their professional status, England will be scrutinised like never before from here on in but this campaign - decent without being outstanding - allowed Simon Middleton to mix and match, with a raft of newish faces used. Kelly Smith impressed hugely while Hannah Botterman gets better and better and with contracts still up for grabs, these Autumn performances could go a long way in determining the make up of the pro squad.

4 Teams in transition show much promise

Technically every team is in something of a state of transition a year after the World Cup, but there are some who are really are rebuiding to the max. Ireland are one such team and though they were beaten by the USA and England, Adam Griggs has much to take from their games. Fielding a very young side, Griggs took a risk including teenagers like Beibheen Parsons and Ellen Murphy, but they have showed huge promise and will only get better while Lauren Delaney looks a real find at fullback. Italy and Spain won all of their games, and USA and Canada have also unearthed some highly promising talent, with the USA tour ending on a high with a win in Ireland, and Canada finishing with back-to-back wins against Wales and Scotland. Even in defeats for others, there were positives, with Scotland and Hong Kong giving their young talent a chance to shine, while South Africa returned from self-imposed exile and, while they lost all three tests, showed they had not slipped back significantly in their period away. That said, their defeats were at least partly due to inexperience of rugby at this level, raising the question of what might have been if South Africa had continued to play and had appeared at the 2017 World Cup  - they would only have had to beat Hong Kong to qualify.

5 The recovery of test rugby?

The rise of sevens leading up to the 2016 Olympics resulted in such a decline in test rugby that its very future seemed threatened. Before the rise of sevens, in 2011 - the year after the 2010 World Cup - 29 nations played 54 tests, but four years later in the year after the 2014 tournament - with sevens firmly in the accendancy - only 19 nations took the field, playing a mere 35 games. The entry for the 2017 World Cup was the smallest ever.

After this year as a whole, and the autumn tests in particular (the most concentrated programme ever) there are suggestions that we have turned a corner. 48 tests have been played in 2018 by 25 nations - not quite back to 2011, but a strong move in the right direction. The Oceania Championship is back, and thanks to pressure from the grassroots, the European Trophy too. Samoa, South Africa and Tonga returned to the test match fold this autumn after years away, while from Colombia to Zimbabwe the demand from players to play something more than just sevens is growing. And its a version of the game that pulls crowds (and TV viewers). From over 17,000 again in Grenoble, to a record paying attendance for a test match in England* at Doncaster, fifteen aside rugby is the version that people will pay to watch as well as play.

The future of test rugby remains a concern, but things are going the right way.