Barette: an untold story of women’s rugby 100 years ago

The story of the rise and fall of women’s sport after the First World War has been well recorded in recent years, but perhaps the most successful example –women’s rugby that went nationwide and lasted over a decade - has been largely forgotten. Until now. 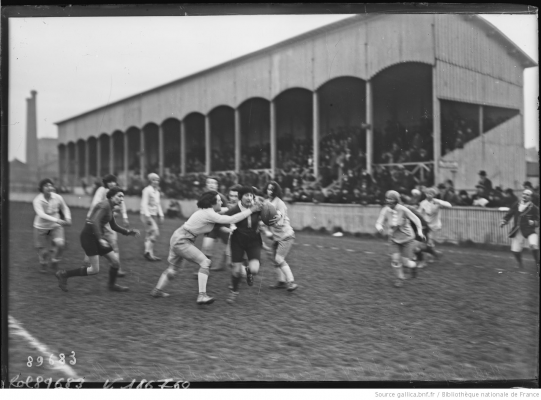 Dick Kerr’s Ladies are almost as famous today as they were a century ago. The story of the women’s football team born from the first world war that sold out grounds in the UK in the early 1920s before being banned by the FA has been the subject of any number of books, films and documentaries. Similarly, the parallel attempt to start women’s rugby league in Sydney in 1920, which ended with similar bans, has resulted in several articles and depictions.

But while these high-profile examples of women attempts to play “men’s sports” failed after succumbing to official resistance, in one country women’s rugby managed to battle through official opposition, to thrive and survive for over a decade, only to be ultimately killed off by a second war.

Yet until now this chapter in the history of rugby union, and of women’s sport in general, has been completely lost – until now.

Lydia Furse, who is researching the history of women’s rugby as part of a PhD programme for De Monfort University in Leicester, has published the result of her first researches into the hitherto mysterious sporting phenomenon called barette.

In the 19th century there were any number of types of “folk” football codes played around Europe, versions of football that by the end of the century became merged down to become the two worldwide codes of association or rugby football. In France one of these regional codes, played in particularly in south-western France, was called “barette” or “chole”. It was a sport that resembled rugby in many ways and is often cited as having laid the ground for rugby to take over at the start of the 20th century, especially in the areas of France where barette had been most widely played.

Barette therefore largely disappeared before the first world war, being replaced by rugby, so It had always been a bit of a mystery why the sport should suddenly reappear again in the 1920s as a women’s sport, and in Paris and northern France too. Even so this has tended to be dismissed by rugby historians as barette was not rugby.

However, Lydia’s new research shows that these conclusions were wrong. The new barette was explicitly a form of women’s rugby, neatly camouflaged as the traditional French sport perhaps to try to avoid the problems that had befallen similar women’s sport elsewhere.  Coached and promoted by former French rugby international Andre Theuriet and Dr Marie Houdre, the sport received its public debut on 2nd April 1922 at the Stade Elisabeth in Paris.

It is now clear that barette was not the folk football of old – indeed that the only thing that it took from the 19th century sport was the name. instead this was (as Lydia describes) a “feminised” version of rugby that “challenged traditional gender boundaries in the social context of 1920s France. There was arguably a feminist imperative behind barrette. The Federation Feminine Sportives de France (FFSF) supported the growth of barrette under the leadership of Alice Milliat, who saw women playing male-identified sports such as rugby and football as a feminist statement. Barette was a symbol of female physical emancipation, and as such supported women’s political and social empowerment.”

Whereas the original game of barette had been closer to a form of touch, the new barette was a full contact sport directly adapted from rugby union, the only major difference being that with tackles being limited to around the waist, teams were 12-a-side, and playing time and pitch dimensions were slightly smaller.

Despite these changes newspapers reporting on the demonstration game in 1922 were under no illusions that this was rugby. Tennis player Suzanne Lenglen wrote an article deploring the new game called “women and rugby”, Le Figaro said “No to women’s rugby, even baptised as barette”, and within a few months the FFR introduced a ban on the sport being played on any rugby grounds, identical to the FA ban in England.

But the Stade Elisabeth (and presumably most of the other venues where the game was now being played) were not rugby grounds, and the new sport came under the FFSF – not the FFR . So, despite premature headlines such as “Women’s rugby is dead!” in papers such as La Presse, the game did not die. Unlike its cousins in England and Australia it expanded. By 1926 there was a national championship and (based on reports in mainly Parisian newspapers) at least nine clubs.

When the FFR tried to enforce its ban in 1927, when a barette game was proposed as a curtain raiser before a men’s championship game at Stade Jean Bouin, there were now howls of protest in the media, and the following year the FFR caved in with barette being played before games at Stade Jean Bouin from 1928.

By 1929 even Le Figaro was encouraging readers to attend charity barette games “deserving of a full house attendance”. Although the game still had something of a novelty value and still had its critics, some writers being very positive about the "elegance" of the game in comparison with the more hard-hitting physical men’s rugby developing in south western France.

Then, with the sport at its height, reports suddenly all but disappear from the French press. The retirement of Alice Milliat from the FFSF and its financial collapse in the mid-1930s shortly afterwards left the sport on its own, but even before that Lydia speculates that the rise of rugby league may have been a factor, another adapted version of rugby union that perhaps stripped away some of the defence that barette was a version of "rugby for women". But the timing of the worldwide economic recession following the stock market collapse in 1929 with the decline of barette is also perhaps also too much of a coincidence.

Perhaps there was no one cause, but despite media silence it seems probable that the game did continue, away from the media spotlight because in 1941 the game appears in the media again – but this time it is the end. Alongside rugby league and women’s football, barette was banned by the Vichy French government.

The right-wing government promoted the values of “Travail, Famille, Patrie” with women encouraged to take a more traditionally feminine role in the home. Marie-Therese Eyquem, the “director of women’s sports for France” explained that “The development of women’s sports occurred during the unstable post-war period. It is therefore unsurprising that during this period sportswomen over-masculinized themselves. They effectively did sport in the manner of men (violent sports – football, barrette – too competitive, too much aggression). And the public powers, attaching very little importance, for multiple reasons, to the physical education and sports of women, left them to develop and degenerate by chance”.

Whether barette had disappeared before 1941 anyway, or whether this ban was the final blow, is impossible to say, but barette did not reappear in 1945 and it was another 20 years before the next generation – perhaps unaware of what had gone before - would form the Association Rugby Feminin (ARF) in 1965 and women's rugby would be reborn in France.

What is the final significance of barette – apart from another tale of “what might have been”? Lydia answers:

“Playing barrette was more than the simple act of picking up the ball and running with it; barrette was also a symbol of female physical emancipation. The feminist imperative behind barrette may not have impacted upon each individual player, but the activity was discussed in the public sphere as an act of gender-boundary crossing. Even seven years after the final reference to women playing barrette in France, women’s rugby was banned. The political ideals behind barrette were not compatible with a collaborationist government, but for a window of time during les annees folles, women could, and did, play rugby.”

Playing barrette was more than the simple act of picking up the ball and running with it; barrette was also a symbol of female physical emancipation