Belgium and the challenge of keeping XVs

Belgium have longer a history of playing women's XVs than England, but like many small rugby nations maintaining a fifteens programme is proving to be a challenge.

In advance of their game against Scotland U20s on Saturday (Peffermill Playing fields, Edinburgh, Kick-off 2pm) we spoke to their team manager Monique Petitjean. 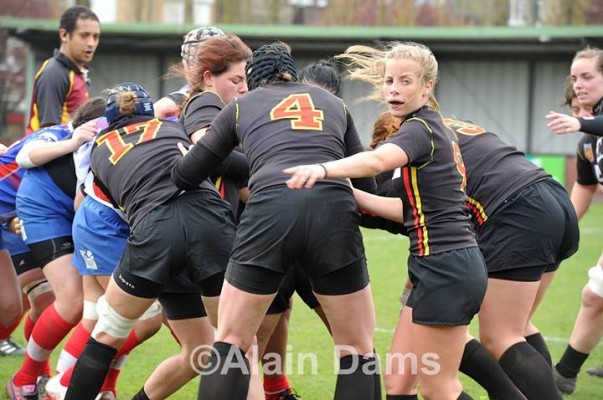 "Over the last five years the FBRB (Belgian Rugby Union) has been attempting to raise its level of participation across the board in all FIRA official competitions (from U 18 until senior)," Monique told us. "The sevens a side teams (men and women) are now in FIRA Grand Prix ("Top 12"), and men fifteens side aim to maintain their place in the European Nations Cup (sometimes called “Six Nations B”). This commitment has included the Belgian women’s fifteens team, who were not sacrificed by the Union when raised the profile of the sevens team."

"The problem is that, since the 2010 European championship, FIRA has only organised 15s tournaments for the top teams. The Belgium squad has had to find itself friendly games and these have been both very difficult to organise and have also given the 15s team poor visibility, meaning it is also not easy to find sponsorship and match partners.

"Too many countries have the problem not having enough money for women’s rugby to enter both sevens and fifteens competitions, and as a result decide that the budget for women would be allocated only to sevens. Perhaps in Belgium one of our strengths is that we are used to the discipline a very small budget, so we were able to continue and develop our national women championship and some fixtures for our national team!

"It was very important to find competition for our fifteens national team if we want to continue the mass development of women rugby (which is part of the IRB project). The Women Belgium championship has now two national fifteens divisions plus two lower divisions playing 10-a-side.

"Women represent 10% of the all Belgium players. If you don’t offer opportunities for the best fifteens side players to represent their country, they will find other sports more attractive. For the best competitors, sevens represents only the cream on the cake - but they all don’t want to miss the rest of the cake which is the fifteens.  We are working very hard to increase the number of women selected at our national fifteens training sessions - thirty women at the latest. We are also working with U 18 young girls for five seasons now and the effect of this is now visible.

"In recent years friendly fifteens games have been organised against a German regional selection, France Défence, a selection of south of England districts XVs, Switzerland, etc

"This season, it was difficult, as we only had one game at the end of August. Switzerland was too busy to come (we have now an annual fixture “trophée Jaques Rogge” between Belgium and Switzerland), Finland also invited us, but we couldn’t travel so far on the proposed date.

"We were therefore delighted to have the chance to meet Scotland U 20 on the 15th March. This will be the first step for preparing our players for our (long-awaited) next FIRA European competition which would be held on the 30th October and 2nd  November 2014.

"We jumped at the chance when FIRA asked “who wants to hold the next European championship between Russia – Netherland – Belgium and the winner of Czech Republic Vs Switzerland!

"Our seven side women team in doing great and was promoted last year to the Top 12, and now it’s our goal to show that we are ready for a real European competition with our women fifteens side as well."