Cracknell: Fiji on an exciting journey

We spoke to ex-England star and the head coach of the Fiji Women's Rugby team, Chris Cracknell.  It has been a year since Cracknell joined his former head coach Ben Ryan to assist in the coaching of the Fijiana team and he will lead the women's side going into the Olympics and this weekend in the final round of the Women's Sevens World Series. 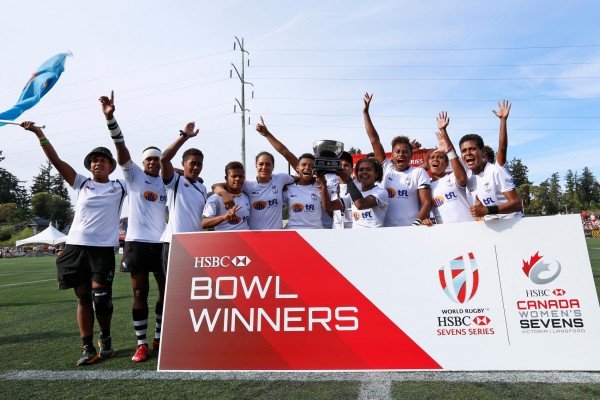 First of all Chris, tell us about how you came to be the head coach of the Fiji women's team?

The role came about after the end of last season. I has been working with the Fiji Men’s 7s tea at the end of last year and was offered to continue to the roll into this season and alongside it become the Director of the Women's 7s programme

Had you had much experience of the women's game in any guise at all up to that and what were your first impression of the girls there when you started coaching?

I've been coaching a variety of teams since my early 20s, from Colts through to Men’s 15s, when I injured my knee for the first time. Ben Ryan who got me over to Fiji, and at the time was my England coach, said whilst I was injured I could use my time wisely by helping Barry Maddocks with the women's programme in the build up to the Moscow World Cup. Alongside that, I also ran the talent ID squad, of which Amy Wilson-Hardy and Sarah McKenna were ones brought through to the senior squad.

Post that and going back to playing, I coached at my old club Maidenhead RFC and for 7s invitational sides like UR7s Wanderers & Apache and while playing for England also dipped in to player coaching in my final year before injury and unfortunately retirement.

After injuring my knee for a second time and retiring. Nicky Ponsford got in touch again and asked me to assist Simon Middleton with the forwards set piece and also 7s understanding. So prior to moving to Fiji I had some good experience.

My first impressions of the girls were that they are exceptionally talented, but unfit and unaware of their talents and the self belief in what they could achieve was pretty low. The fitness we have resolved and we are hitting our markers on the yoyo, though we could s Your season started with a massive bang in beating Canada, how do you assess how it's gone since then and how would you rate your progress this season?

It's been a fair old season because prior to it we had to qualify for Rio which we did over in New Zealand. The target for the year was to build towards Rio post that qualification.

We're not as long in the tooth as other programmes as really we've only been a squad since October and by no means are we a full time programme. But the girls are extremely talented, and, as we showed in Dubai, can unsettle the form card.

I'm happy with were we are at and am looking forward to France and the build up to Rio and the exciting journey that will take us on as a group.

What are the squad's key strengths and what are the key areas to work on?

Well if I told you all of that then everyone would know our secrets! We’ve areas of our game I'm happy with and areas we need to improve, but I think every coach would say that. If you stand still you'll never improve or better yourself!

What's the environment in Fiji like for developing the women's game - is there the financial and structural support needed to help it to thrive?

Fiji has the potential to develop a flourishing 7s programme for women and the women's game, especially with some of the talent at school level in other sports. The challenge is capturing that, nurturing it and have a strategy to bring those players through. We've brought six through from the Junior Commonwealths this year, and the hope would be to continue this in the future.

The financial element is a big issue, but with successes this year it has gotten better and the awareness of the women's game has grown, so support is better than it was when I first arrived.

Busy! Working across both camps means Tuesday to Wednesday usually holds at least four rugby sessions with Monday and Friday being either just the men or women's programme in. Certainly the build up to Rio is going to be action packed with us all in camp from June to the departure to Rio!

How do you rate your chances and what would success look like?

I think we've shown this year we can upset the apple cart, so Rio will be about us being the best we can be on the field and using our time to prepare wisely in June/July to give us the best shot possible. If we are successful I hope that it would really open the flood gates in terms of women's rugby in Fiji.