England Deaf look to the future

England Deaf captain Gina Iaqaniello had a long trip down to Devon this week to help launch a new Centre of Excellence for Deaf Rugby, at the Exeter Royal Academy for Deaf Education – the latest positive development for the women’s squad. 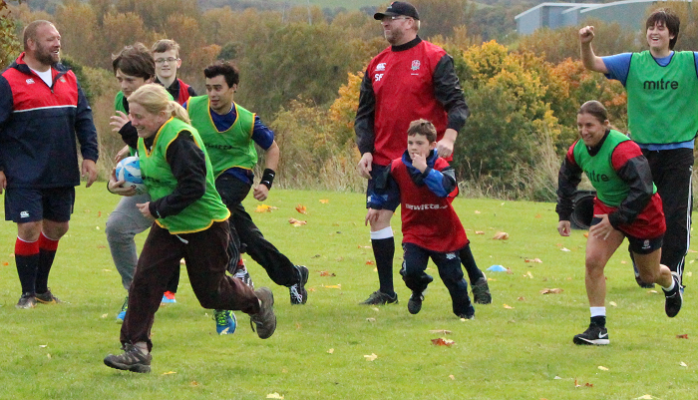 It’s been a few years since Scumqueens last looked at the England Deaf Women’s team. At that time the team was barely a year old, so we took the opportunity of the launch of the Centre of Excellence to ask captain Gina Iaqaniello about how the Deaf women’s rugby squad has developed since 2010.

“Overall the women's team has been in existence for about 5 years but for most of that time numbers had always been low”, she said. “With low numbers it was difficult to do anything.

“Last year myself and three others attended an England Deaf training weekend at RAF Brize Norton. We discussed our future with the Head Coach Sean Fletcher and we agreed that we would work at it ourselves and get more girls involved. Once we gained 12 players the England Deaf Rugby Union (EDRU) would give us full support. At that time we had about five players, but we did exactly that, numbers slowly crept up and EDRU have kept their word and gave their full support.

“By January we were able to play our first tens fixture, at Cardiff Arms Park as a curtain raiser for the men's England Deaf v Wales Deaf international. We usually have a fixture when the men play and since then we have played a couple more tens games - our last game was against Cannock RFC at Moseley in September - and are now in a position to play full fifteens with a squad of 32. “It's a huge challenge with girls coming from far and wide and even a simple training session is a logistical nightmare. We train about once a month at Stowe School in Buckinghamshire or at Bromsgrove RFC in the Midlands.

“There is a rugby club feel when the men and women are all at the same place at the same time and both squads support each other. The girls are extremely committed and are fab at sharing lifts, picking people up and even opening up their homes for people to stay over to make it work. Every player has to try and get personal sponsorship to cover the costs of travel. It's the only way it can work and their commitment is immense. They all want it to succeed.

“For many, myself included, it's the only time I meet and socialise with anyone else who is deaf and it is refreshing. The bond within the team is unique and we all feel like we have known each other for years. It's as if the struggles, hurdles and challenges we face by being deaf have brought us closer together.

“We are dying to play an international but it seems that we may be the first National Deaf Women's side in the world. It's great as we are the pioneers but the girls would love the opportunity to play an International game.

“Head Coach Sean Fletcher stuck by his word and has been instrumental in the development and progression of the squad. He deserves special thanks and the whole squad respects what he has given us the opportunity to do. We couldn't have done it without him. His passion and dedication are truly inspirational.”

Part of being an England Deaf player is also a commitment to participate in the Community Events such as the one held at the Exeter Royal Academy for Deaf Education this week.

The launch event attracted players from both the England men’s and women's deaf squads, local coaches and players from the Deaf Academy, who all came together to encourage more Deaf people to experience the game of rugby. As well as demonstrating the skills of the players, tips were given to the coaches by Deaf Academy staff on how they could support Deaf players at their own clubs.

“We want to spread the awareness of Deaf Rugby,” continued Gina. “I went along for the day and loved seeing how the kids improved in just the short time we were able to spend with them. “I also love the non-rugby skills they get from it. At first the youngsters were quite shy but playing the game of rugby soon got them out of their shells and eventually they were jumping in and being cheeky. I love what sport gives people. The kids were all more confident by the end of the day.

“The message we are trying to bring is that you may be deaf but it is not a barrier to playing sport. All England Deaf players play in normal hearing club teams.

“The School Principal said that we were role models. Maybe we are, but I just felt that for that day I managed to have fun with the kids and put a smile on their faces. That makes us all feel good and if any of them decide they enjoyed it enough to go find a club and play we've done a great job and achieved our goal.

“It was especially rewarding for me as two of the most promising kids there during the day were girls. I made a 500 mile round trip to attend this event. I got home slumped on my sofa feeling warm and smiling content that it was worth every mile.”

Having now showcased Deaf Rugby at Exeter Deaf Academy, the plan is to host future events at local clubs to strengthen the link between the South West and the Deaf RFU. These sessions will be open to the wider community to get involved and will provide an opportunity for the RFU to spot emerging talent.

The next England Deaf Rugby event is planned for February 2016. If anyone would like to be involved in Deaf Rugby contact Community Rugby Coach Wayne Reed on waynereed@rfu.com for more information.

We are dying to play an international but it seems that we may be the first National Deaf Women's side in the world. It's great as we are the pioneers but the girls would love the opportunity to play an International game.