In the first of our "Focus On...." series we take an in-depth look at the French squad ahead of their crucial clash with England on Saturday. 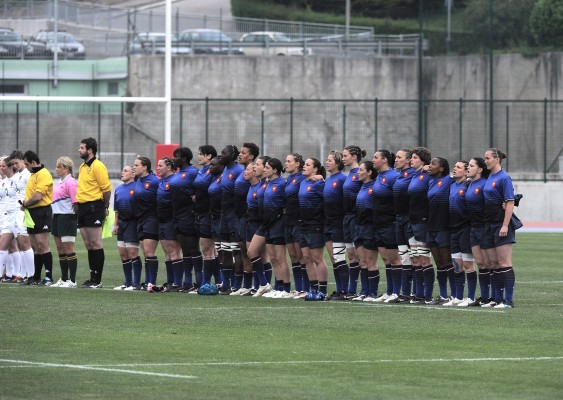 France take on England this weekend a couple of weeks following their fine win over Wales at home in round two of the 6 Nations. The win over Wales helped to banish the memories of a disappointing loss to Italy in terrible weather in round one, and France will travel to Twickenham in a positive mood.

Here John Birch looks at the 23-player squad for the weekend.

Injuries:
The absence of Aurelie Bailon from the French team is important. Something of a talisman, the Perpignan fly-half, in partnership with club team-mate, captain and scrum-half Marie-Alice Yahe, has been a key part of French teams in recent years. A reliable kicker (a duty she has tended to share with Jessy Tremouliere recently), she is prone to injury - and France rarely perform well in her absence. This season she fractured her thumb in training five days before the first game against Italy – which France lost.

Sandrine Agricole (Rennes) (64 caps)
The senior player in the French team. Saved (as much as possible) for this match – she was only brought into the squad against Italy and Wales at the last minute because of Bailon’s injury, and played only in the second half of the first two games. A hugely talented centre, her only weakness is an occasional tendency to take her eye off the ball when under pressure. If Agricole plays well, god help the opposition – if she plays badly, god help France!

Manon Andre (Saint Orens) (26 caps)
A reliable back-row and a near ever-present in French team since her debut in 2009. She took up the game despite her parents’ wishes. The face of “Rebonds” – a French charity that uses rugby to develop social inclusion (alongside Thierry Dusautoir, among others), she is an important figure at the breakdown.

Julie Billes (Perpignan) (3 caps)
A young (20) fly-half/centre, singled out by Yahe as the player to watch, at club and national level. She debuted against England in the Autumn, she has mainly played for the Sevens team and came into the squad for this game in place of Audrey Parra.  SHe was part of last season’s French U20 team that blew England away three games to nil, including a 50-0 win in Paris.

Christelle Chobet (Lons) (21 caps)
An experienced prop, held in reserve and brought into the squad specifically for the England game. She will almost certainly start. Her debut  was as long ago in 2008, but she was not in the World Cup squad. However she has been a regular in recent years. She switched clubs at end of 2010/11 from champions Perpignan to Lons… who then won the 2011/12 championship! A Paramedic by trade.

Coumba Tombe Diallo (Bobigny) (10 caps)
A back row and ever-present since her debut last year. Originally from Mauritania in north Africa, she is one of few female players from that country and played for an African team in a developmental sevens tournament in Paris last June, alongside Assa Koita (see below).

Hélène Ezanno (Rennes) (17 caps)
Prop. Although she only played her first international two years ago, she is very experienced at club level. Injured at the start of the game against Italy, she missed the game against Wales but is now fit again. A nurtitional biochemist.

Lucille Godiveau (Rennes)(26 caps)
Centre. Described by the local press as “the nugget” (“la pépite rennaise”) has been playing since she was five. Debut in 2008, played in the 2010 World Cup. A postwoman in her day-job.

Laetitia Grand (Lons) (5 caps)
Made her debut against England in the autumn and is a back row/No 8 known to her team-mates as “minou”. Scored Lons’ championship-winning try last season in her first season at the club.  Travels 200km (round trip) twice a week from her home to train at her club and works in her parents’ bar.

Elodie Guiglion (Perpignan) (4 caps)
A wing and another player who debuted against England in the autumn series, Elodie moved up from sevens rugby. The only mother in the current French squad (daughter, Lola, was born just over a year ago).

Assa Koita (Bordeaux) (8 caps)
Brought into the squad after the defeat to Italy, this second row won her debut in the 2011 autumn series against England. Originally from Mali she played for the African “Gazelles” in the Paris sevens last year (alongside Diallo, above).

Caroline Ladagnous (Lons) (35 caps)
A wing/full back, Caroline is easily the leading scorer in the Top 10 this season where she has scored in almost every game. Also a key part of France’s sevens team since 2011, Caroline debuted at 15s in 2008 at the age of only 19 (having played for only a year - she was originally a heptathlete) and played at the World Cup – she would have more caps but for sevens call-ups. Known as “Roro” [no obvious English translation!], her pet hate is hanging around at the start of a game (“If I could get up and play directly, it would suit me very well!”), so presumably hates anthems!

Jade Le Pesc (Rennes) (2 caps)
Or sometimes “Le Pesq” [consistency in spelling in not a strong point with the FFR!], Jade started playing at the age of seven, and had already caps at U20 and 7s level before significantly developing her game during a year in New Zealand (she was “player of the season” for Auckland’s championship winning team in 2012), where she went to develop her English prior to university. Her aim is to be part of a French 7s team at Rio, but she also would like to return to New Zealand to play rugby there. Debuted against Italy and has scored in both of her games since.

Marjorie Mayans (Saint Orens)(10 caps)
A centre and another player who has been concentrating on sevens who has returned to 15s for this championship. Started playing because her younger brother played.

Gaëlle Mignot (Montpellier) (24 caps)
A hooker who made her debut at the World Cup. The centre around which France’s pack has been rebuilt. Occasionally captains the team in Yahe’s absence.

Safi N’diaye (Montpellier) (10 caps)
Replaced Aida Ba at no. 8 after the latter’s retirement. Took up rugby because in Castres as “in this small town it is that or joining the military!” Relishes playing again England – “It is not the fear but excitement”.

Elodie Portaries (Montpellier) (12 caps)
Prop, who won her debut in 2011 against England. Likely to start on the bench after Ezanno’s recovery from injury. A security guard in her day-job.

Elodie Poublan (Montpellier) (33 caps)
Scored five tries in one game v Scotland in 2011, but has rarely been able to show similar form since and has, as a consequence, been in and out of the team. Eldest of four sisters, all of whom play rugby.

Sandra Rabier (Ovalie Caennaise) (47 caps)
Second/back row, captain of Caen, and occasional captain of France, Sandra was originally a ballet dancer before her father introduced her to rugby. Joined Caen at 16, and played for France at 20 (in 2007). A sailor in the French navy.

Laetitia Salles (La Valette) (75 caps)
“Titi” – the most experienced player in the French team – played her first game for France in 2003, alongside Agricole. Moved from Perpignan, after last season, to La Valette who play in the second division. Voted the leading hooker at the 2006 World Cup, these days she shares the role for the national team with Mignot, with the latter normally starting. Training to be a referee.

Jessy Tremouliere (Romagnat) (16 caps)
Farmer’s daughter and agricultural student, Jessy plays her rugby for second division club Romagnat Clermont Auvergne principally because to join Top 10 club would interfere with her studies, and her work on her father’s farm. Originally a footballer, she turned to her father’s sport of rugby in her late teens and won international recognition within less than two years. Normally a centre/full back, she has switched to fly-half to cover Bailon’s absence this season. A reliable and strong kicker.

Aurélie Vernhet (Montpellier) (5 caps)
A young prop who made her debut during last year’s European Championship. Likely to start on the bench against England. A midwife.

Marie Alice Yahe (Perpignan) (38 caps)
Half of French rugby’s “golden couple” (with Lionel Beauxis), “Malice” became captain in 2011. Her father played, and Yahe was introduced to the game by a brother “who needed someone to throw the ball back”. Originally a sprinter and pole-vaulter, her rugby talent was spotted in 2001 when by chance she attended a rugby session at her school where the regional technical advisor (later French men’s team asst. coach) Didier Retière was present. She could pass both ways, knew the rules, and was signed up to play for the college on the spot. Within seven years she was playing for France.