Get the facts right!

The rapid rise in media interest in women’s rugby is bringing into the open the lack of records and statistics on the game - and that is resulting in ill-informed stories appearing in the media. 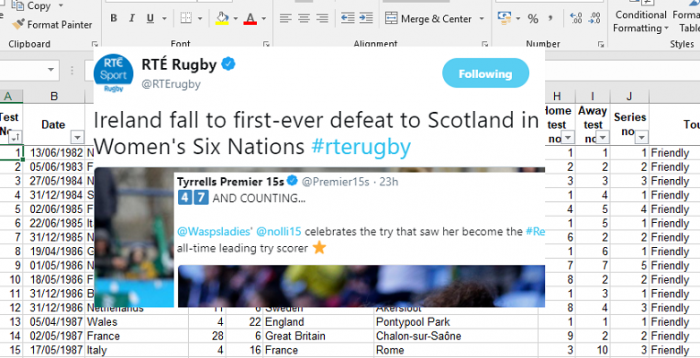 The 2018 Six Nations has been a memorable tournament but has also been accompanied by some dubious or incorrect statistical claims appearing in the media – and these claims often seem to have come from authoritative sources that the media are used to relying on.

The errors have included both team and player records, from a statement on the official Six Nations website that Scotland had never previously beaten Ireland (when Scotland had previously beaten Ireland nine times in the tournament), to reports from the RFU that Nollie Waterman’s 47th try set a new record (despite it being 16 short of Nicky Crawford's 63 tries and 14 short of Sue Day’s 61)

It may seem like a petty point but women's rugby history is important. It’s why we have campaigned down the years for things like women’s inclusion in the Rugby Hall of Fame, or an official women’s test ranking. It may seem a little trite, but a good indication of how seriously an authority treats the game today is how seriously it treats its past. And too often inaccurate information and poor statistics take root and become “facts”.

But perhaps it is no surprise that errors are made. The lack of readily available statistical information on women’s rugby is remarkable, especially compared to the men’s game. The Six Nations publish every year a media guide packed with data and records of all sorts. This year’s book fills over 120 pages, of which only eight are devoted to the women’s championship.

So, when the media need information, facts and data to fill their columns where do they go? Well, they often come here as we (well, one of us) was central in compiling the list of women’s test matches that World Rugby used as the basis of their test match rankings.

This has never been properly published but the information is available in this spreadsheet - and we invite anyone to use and republish it, or extracts from it, so that at least statements made about team records can become accurate and consistent.

And if anyone knows of any test matches missing from the list, please let us know. We only learnt about two we were not previously aware of this year!

Player information is a different level of difficulty. Team lists and scorer information for many, if not most, women’s tests played during the first 10-20 years of the game were never published, so for information about appearances or points scorers we have to rely on unions, many of which may not have complete information themselves, not least because the women’s game was either not their responsibility or a very low priority, until very recently.

To compile accurate statistics that are even nearly comparable to those that exist for the men’s game would require the co-operation of all of the 64 unions that have played test matches – and that is well beyond the capacity of this website, or any group of amateur enthusiasts (apart from anything else, it took five years to compile the test results list). Perhaps this is one area that World Rugby could use its influence?

Until then perhaps the everyone, including the media, should respond to any record claim with a simple “are you sure?”

It may seem like a petty point but women's rugby history is important. A good indication of how seriously an authority treats the game today is how seriously it treats its past