Scrumqueens' Ali Donnelly caught up with England's Rochelle Clark for Rugby World magazine last month. Ahead of tomorrow's test, where Clark is set to come off the bench and gain her 114th cap to equal the England record set by Jason Leonard in 2004, here's the interview in full. 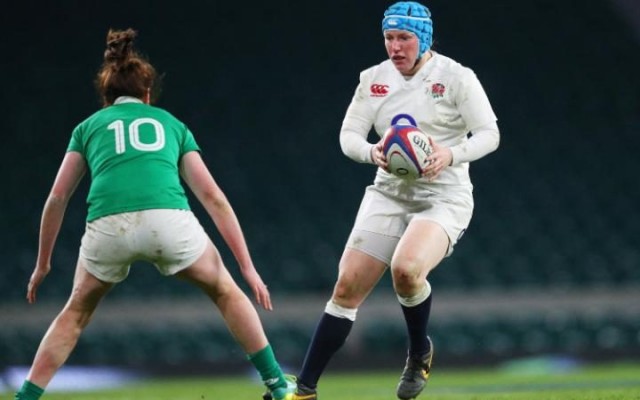 Even by Rochelle Clark’s own lofty standards, this season is shaping up to be rather remarkable.

The England prop is one cap away from equalling Jason Leonard’s English test cap record of 114, two caps away from equalling Donna Kennedy’s record as the world’s most capped women’s player, soon to become one of the first players in the world to become a contracted athlete in the 15s game – oh and she’s aiming to appear at her fourth consecutive World Cup next summer.

The 35-year old, known to everyone in the game as Rocky, is taking it all in her stride.

“It’s a big season and first and foremost we’re focusing on the games coming up which are going to tell us a lot about where we are. I’ve got a short term contract which means that I will wait till January before going fulltime when we will be able to take advantage of all of that extra time together over the 6 Nations and into the World Cup.”

Thanks to increased investment, England are leading the world in supporting their 15s set-up. This year contracted players will have at least eight months together to prepare for the World Cup in a long season which includes a tough Autumn schedule and a 6 Nations. For Rocky, signing a contract was a dream fulfilled.

“This is something I have wanted to do for my entire career so I feel incredibly privileged to get the opportunity. At test level the difference between winning and losing is often a small percentage, so I’d like to think that this will help give us that extra 5-10%.”

While winning the World Cup in 2014 is a career highlight, the years that have followed for England have been lean success-wise with focus on the sevens game affecting test match results.

“It was definitely a tough period coming on the back of the World Cup, especially to lose our first game afterwards. We went into that season with a lot of experience missing and some injures, but it has obviously allowed us to blood some new players and there are a lot more girls there now who have experienced tough test match rugby.  As one of the older players I have really enjoyed getting to know the younger girls and I think we can now really blend some of that youth with the experience we have.”

“We have been given an opportunity to go to the World Cup in the best possible shape with a lot of time together behind us.”

For Clark a major bonus of fulltime training is earning vital rest and recovery time which with her hectic schedule as a personal trainer and head coach at Chesham Stags (men’s and women’s teams); Bucks Uni and the county set-up, is currently hard to come by.

Far from eyeing this season as one last shot at even more glory, Clark cannot imagine life not playing rugby.

“I live and breathe it. I feel that I have been playing some of my best rugby over the last four or five years and that peaked in 2014 and now I am pushing on again. I don’t intend to retire. I will keep playing until I am told I can’t play anymore. Right now there are a lot of good props around so I need to be at my best and use my experience to stay in that England team.”

Having made her debut back in 2003, this will be Clark’s fourth World Cup. She has been part of a huge shift in the women’s game which has professionalised beyond recognition.

“I’ve seen massive changes since I started playing especially to how the front row has developed. It was always the bigger girls that got thrown in there and you’d know who was a front row and who wasn’t. But the skills of the girls now, the ability to handle the ball, offload, carry and just offer a real dynamism is miles away from where it was.”

England are no longer the team to beat in the women’s game. France are the 6 Nations champions, New Zealand won the recent summer series, but with the return of vital players from sevens duty, it would be foolish to bet against them. Clark is certain that returning players will provide a huge boost.

“We jokingly call them our skinny sisters because in playing sevens they’ve become pretty lean and light and I think we’re all looking forward to them coming back and getting back into it. I will try and keep up with them as best I can! They’ll bring a certain intensity on the fitness side as well as the skills that will benefit all of us.”

“This season the RFU have backed all of us with this investment and they are giving us every opportunity to be world leaders. If we can get to the World Cup with a squad of 30 fit and firing players who have had the best of eight months together that will be an incredible place to be. “

Away from her England duties, Clark lives a life where rugby features heavily. She plays for the rebranded Worcester Valkyries who now play their home games at Sixways thanks to a tie-up with the professional club, and she has heavy coaching commitments.

She sees coaching as something she could pursue as a long term career goal with the aim of completing her Level 4 qualifications in the near future.

“At Chesham things have been going well and I’ve been with the men for a good spell now and it’s taken until now for it to start falling into place. With the women, our numbers are growing and the squad is in better shape than ever. Coaching the men’s sides has been a real breath of fresh air. I think they know that with me they can get both an arm around the shoulder or a telling off so that balance works well as a female coach.”

“Coaching professionally would be a dream – the idea of coaching a Premiership Academy team or a women’s Premiership team is something I’ve thought about further down the line.”

Given her achievements to date, rule nothing out.