How the USA taught New Zealand to play

Three years ago we celebrated the 30th anniversary of the Wyverns - an American team that revolutionised women's rugby in Europe. Now a researcher, Martin Twaddle, has uncovered information about a series of other tours by American teams that helped develop the modern game in New Zealand. 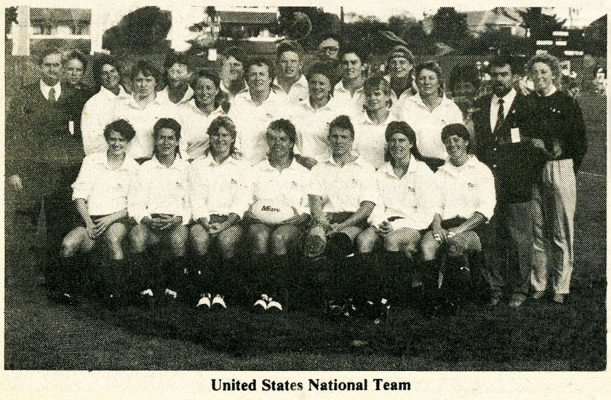 This year the Black Ferns play, quite surprisingly, their first match in the United States. As the US are one of the top sides in women’s rugby and have played NZ eleven times, you would have thought this would have happened already. While this is NZs first Test Match in the US, they have played there before. This match happened at the end of a remarkable period of development of the women’s game, a period dominated by the US. Throughout the 1980s it was American teams who led the way in promoting the sport in NZ, and beyond. This is the story of the international sides to tour New Zealand from the first in 1980 until the first World Cup in 1991.

The development of the international men’s game in the late nineteenth and early twentieth centuries followed a predictable pattern in NZ. Tours were shared with our closest neighbours in Australia, or from the centre of the British Empire. However the women’s international game did not follow this pattern. The early contact, from 1980, was exclusively with American clubs. Not until 1988 and 1989 did any NZ team have contact with a non-American side. This seems surprising, as the United States were not known as a strong rugby county. But women’s rugby had developed earlier in the US, with clubs starting in the 1970s. By the 1980s the were looking for fresh victims.

The very first women’s side to tour NZ was the superbly named Rio Grande Surfers, from San Diego, in June 1980. This was amateur rugby at its best. Being housed with the opposing teams, raising money to pay for it all, and having a great time doing it. This was also at the infancy of women’s rugby in NZ. The first known inter-provincial match took place in 1980, a formal competition was not introduced until 1999. This first tour was only four matches long, all in the North Island, and was undefeated. They played a Wellington XV, which was selected after trial matches, but also against sides which seem to be scratch sides never having played before. Women’s rugby got coverage in newspapers, elevating the sport in a positive way.

The second tour was hot on the firsts heels, with the California Kiwis RFC arriving in August 1980. This tour was also four matches long, with the first being a warm up with an under 17 boys side, also going undefeated. The last match was played at Lancaster Park in Christchurch, in the South Island.

In 1982 the Linwood RFC Ladies became the first NZ side to tour, heading to California for a series of matches.

The Rio Grande Surfers and the San Diego State University clubs combined, and as the San Diego Surfers returned to NZ in 1986. Again undefeated, the American procession continued. The final match was at Lancaster Park as one of the curtain raisers to the All Blacks Vs France Test Match, against a Canterbury XV. This was a massive stage for the emerging sport. The boost to the game’s profile was enormous, the New Zealand Times covering the tie on it’s front page. Bill Freeman, the NZRU Director of Coaching, lauded the match: “I thought the handling skills of the women were exceptional and the clearance from the scrum was also excellent. It was great fun to watch”. He went on (a bit patronisingly, but this was the 80s!): “The way they played the game you wouldn’t have known they were women. They played it very well and I think women’s rugby should be pushed”.  Alex Wyllie, the Canterbury men’s coach, and soon to be All Blacks coach, was quoted as being: “very impressed by the standard, noting that one or two of the players looked just as skilled as those under his control”. High praise indeed from one of the hard men of NZ rugby.

It looks as if NZ rugby may have been catching up, with Canterbury going down by only 4-0.

Three of the early tours are discussed in depth by one of the tourists in a book. Gullible’s Travels: Raw and Uncut covers the two Surfers tours and the San Diego State University tour. The author was on all three tours. It is a frank account of a woman’s life in rugby, and makes some wonderful observations of women’s rugby and society in NZ in the early and mid 1980s. If only each club had an author in their midst!

1988 was an important year for NZ women’s rugby. The Crusadettes, from Canterbury University, toured. They played a series of matches in the United States, the United Kingdom, and Europe. These were the first matches by a NZ side against non-American teams. This tour has been regarded as establishing the idea that a NZ national side was both possible and desirable.

The following year saw a continuation of the horizons broadening, with Richmond RFC from London touring with a strong squad. They played a longer tour with nine games, also going undefeated. Again the opposition was mostly club sides, only Auckland and Canterbury putting up provincial teams.

Keio University from Japan also toured in 1989, as did the Pacific Coast Grizzlies, the territorial representative side from the North West and Northern California. The Grizzlies have the record of playing against the first ever NZ representative side, on 22nd of July at Lancaster Park. They played six other matches, again only two were provincial sides – Wellington and Auckland.

1990 saw the first ever international rugby tournament. RugbyFest was hosted at Christchurch in August, with the US, Soviet Union, and Dutch international sides competing. Also visiting were Tokyo and Nagoya from Japan. The sides played each other as well as a score of Canterbury club teams and the Auckland provincial side.

This takes us to the end of the period. 1991 saw the first World Cup in Cardiff, and the continuing growth of women’s rugby both in NZ and around the world. On their way to this world cup the NZ side stopped off in California to catch up with old friends, playing a match against Belmont Shore RFC. This was the first match by the NZ national side in America. One former tourist to NZ billeted some NZ players and has remained a NZ supporter ever since. That is what rugby does.

The NZ side was beaten in the semi-final by the US, who went on to win the first World Cup. A much deserved reward for their development of the game. The NZ national side developed into the strongest side in international women’s rugby, but we should remember the time when the USA were the masters of the game.