India ready for their test debut

Next month India will become women’s rugby’s 65th test playing nation. We spoke to Nasser Hussain from the Indian Rugby Union about the next step in India’s development. 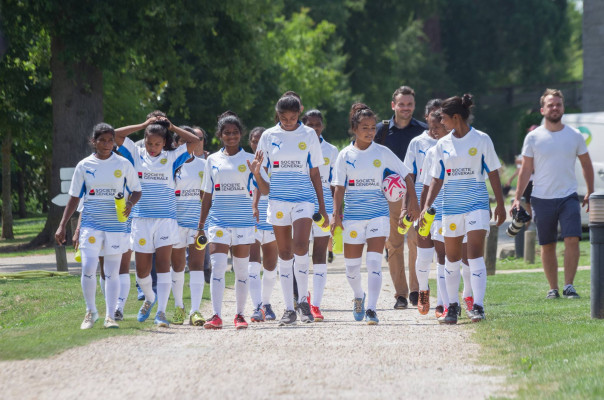 The development of Indian rugby has shadowed the growth of this website over the years.

When Scrumqueens began back in 2009, India was one of the first developing nations we featured when a smaller number of rugby enthusiasts, mainly from Pune, formed the first ever Indian team at the Asian 7s in Thailand.

They narrowly avoided the wooden spoon that year, but steady development since has gradually moved India up the rankings with their potential really being shown in December when their U18 girls beat Hong Kong on the way to the semi-finals of Asian U18 championship.

Now they are taking the next big step, joining the more exclusive world of test rugby when they compete in an Asian development tournament in Singapore from 2nd to 5th June.

The first domestic XVs tournament was in 2016 and that initial six teams has now grown to 14, split over two divisions in a tournament that lasts 10 days.

The development of XVs came as a result of from demand from the players, including players in the national sevens squad who wanted to play XVs. They had seen the men’s team play and asked “what about us?”.

Nasser Hussain explained that a significant difference is between how XVs and 7s is organised. National 7s tournaments are organised though state teams (because – as an Olympic sport – it has to follow the government’s sports structure). Fifteens, on the other hand, builds on India’s long rugby tradition.

“Fifteens has been around for much longer and traditionally it has been organised as a club sport. And the traditional clubs have been very good at developing women’s teams - the Calcutta Cricket & Football club (the oldest rugby club outside the UK,), for example, has developed their own women’s teams. In other areas clubs may combine to form state teams”.

“Due to the development programmes such as 'Get Into Rugby' younger children are also now coming into rugby straightaway, while the older players have come to the game from athletics, kabaddi and other sports.

“We initially had a misconception that Indian traditions might be a barrier to girls playing the sport, but that has been proved wrong. The girls blew us away with their enthusiasm for contact sport. There is also a lack of opportunity for women and girls to play team sports in India, and we have by chance benefited from that. The girls love playing a team sport.

“We also reach out to rural India where there is a lack of opportunity for girls to play sport.”

And Rugby India reach out with significant financial support as well. All of the costs for teams playing in the national championships – accommodation, meals – are met by the national body, apart from travel costs to and from the event, which are either paid by state associations or by the clubs.

“Players do not have to pay anything to play the sport. A few clubs charge an annual subscription for players, but that is only about 1% of clubs, for the rest it is entirely free for women and girls to come and play. This is thanks to World Rugby, our sponsors Societe Generale, who have been very supportive of the development of women’s rugby, and state governments.

“For the national team, Rugby India meet all costs, from travel expenses from their home to the competition, costs for training camps – everything. It is the least we can do for players representing their country”.

Some 25 players will travel to Singapore, to be selected from around 40 who have been invited to a training camp that starts on 4th May, selected following a zonal tournament (India is divided into five zones, above state level) in April. The final team will be announced about two weeks later. All of the existing sevens squad will be involved, as well as new players.

India’s slow and steady growth in sevens is reflected by their plans for fifteens. Nasser said that they are quite happy to stay at the development level – “even if we were offered promotion I think we would turn it down”, he said.

The players are looking forward to it with players who could not play sevens given an opportunity “It widens the player base within the country. There are a lot of players who would not be part of our sevens squad, making the national teams something to aspire to for more players.”

The squad is quite young overall – roughly aged 17-25 - and even at club level few players are over 30. “This is where culture has an effect”, explained Nasser.

“Once players get married and start a family involvement with the game takes a back seat. But some players have come back because they enjoy it and want to be involved”.

And they are being recognised for their achievements.

“The women’s game probably gets more media coverage than the men’s. This is to their credit as they do very well on the international circuit compared to the men. As well as the U18 girls, the senior women finished second in the Asia Trophy in 2016 and they got a mention by the Prime Minister in his radio talk show. That was huge – the girls were absolutely chuffed about it.

“And it being a contact sport, and a team sport, and women and in India it does generate a lot of interest. Why are they playing a team sport, why a contact sport, how did they get involved – and how is the team so diverse, with players from all walks of life from NGOs, from humble backgrounds, from tribal areas, as well as from upmarket high-end metros. And they all get along, like one close-knit family”.