Irish World Cup aims be "most memorable ever"

Women's Rugby World Cup Director Garrett Tubridy brings us up to speed on how Ireland are preparing for this summer's tournament and plans for ticket exchanges, fanzones and playing festivals for visiting teams from all over the world. 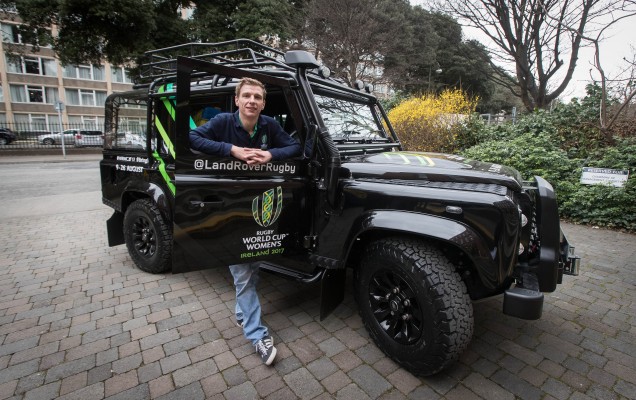 Firstly, Garrett, tell us how preparations are going at the two venues and what fans can expect on the days themselves?

We are all set and ready to welcome the teams and fans. All accommodation, transport and facilities are ready. We are finalising plans for fanzones in both Dublin and Belfast- as we want to have a strong social element for fans.

We also have some “Bring Your Boots” rugby festivals- for clubs who want to come to Ireland, play against other teams and then attend the World Cup. We already have teams coming from France, Canada, Wales and England to play in either Senior 10s, U15 or U18 festivals in Dublin or Belfast.

Everything is on track and we can’t wait to welcome the teams, the supporters and get the tournament underway.

How different will UCD be to the set up France had for their pool stages last time around?

You always look to learn from what has gone before, and we have learned a bit from 2014, as no doubt, the FFR did from England 2010- but it’s a format that works for World Rugby, in terms of hosting all Pool stage matches on a campus, before moving to bigger venues for the knock-out stages.

In terms of venue selection, UCD is very accessible to Dublin city, which that makes it easier for fans to get to the matches; UCD is accessible via lots of public transport networks and it’s only about a 30 minute walk from the centre of Dublin. We are also conscious of the need to have facilities for fans who are going to be onsite all day— food and entertainment, so we are building a fanzone which will be in operation on all 3 days in UCD. There are a few other arrangements, we are making for all stakeholders; small touches that make a big difference. But like I said, maybe the 2021 hosts will learn from us, and that’s good too because it will build the tournament further.

It's a small venue - any concerns that the chance to pack even more fans in is going begging?

The combined capacity for all venues/days is around 55,000, so there are more tickets available for this World Cup than any previous Women’s Rugby World Cup.

UCD has worked well for us in hosting World Rugby Sevens Tournaments and Ireland’s November internationals; it’s very much a known quantity with excellent facilities for players and fans alike.  Kingspan is a fantastic venue also and QUB has all the facilities we need on-site.

I think if you ask most players, they would rather play in a smaller, packed venue with a good atmosphere, than in a big empty stadium. Therefore, from the perspective of players, fans, and the TV output, the venues are great. Tickets have been on sale for Kingspan since last August and for the Pool Stages since early January, so fans have had lots of time to get tickets. Tickets are still available with just under 100 days to go- that says to me that we have the right venues in terms of size v demand.

lf we sell-out in any of the venues before the tournament starts, that’s a good message; it shows growing interest in Women's Rugby and the attractiveness of Ireland as a destination to host the tournament. It will create a sense of FOMO- which should push demand to the venues/dates that are not sold out, and it should mean that future World Cups will sell out quicker - all of these are positives.

Tell us about the interest building in Ireland at the moment and what the IRFU has been doing to grow that?

It’s great. The Tournament is being supported by both Governments, North and South, the city councils in Belfast, Dublin and Dun Laoghaire aswell as the tourist agencies; Tourism NI and Fáilte Ireland. We have been touring the Trophy around the island- with the 100th event taking place last weekend; that’s been great for the promotion of the tournament. Ticket sales have been going well and there is a real sense that this could be one of those ‘I was there’ tournaments. We are also on-track to recruit 2,017 extra female players by the end of 2017 (the legacy programme goal is “2,017 in 2017”) and the interest / awareness of the tournament is increasing.

How important has the TV coverage been in recent years to generate interest in the national team and what are the plans for broadcasters as this tournament?

Hugely important. We worked with 6 Nations and the broadcasters to facilitate having our Women’s 6 nations matches on-air; that is important for awareness. Many fans would have been making an ‘appointment to view’, but what is just as important was to have fans watching while it was on in the background in the pub or sports club; that’s what generates more awareness, widens the pool of interested fans, and gets people talking about women rugby.

What's the aim for the knockout stages - a sellout? And how are ticket sales going?

I think that we will be sold-out or very close to a sell-out at all Pool Stage matches and, with a bit of momentum, we will sell-out the final in Belfast too. Semi-finals day is always a challenge in any sport- as a fan you may want to hold-off incase your team makes it to the final etc. but we are hugely encouraged that we were coming from approx 2,000 fans at each of last season’s Women’s 6 Nations matches, to over 40,000 attending a World Cup, outside of the regular season, on week-days, in the height of summer.

With Ireland also bidding for the men's World Cup - how much extra pressure is there to ensure this tournament is a success and how would you measure success when the tournament is over?

Ha! Yes and No. Yes- because of the timing, we want Ireland to host RWC2023, and WRWC2017 comes at a time when Rugby World Cup are evaluating each of the bids, so there will be heightened awareness of how we organise the event, and what we, as Ireland, can bring to hosting an international rugby tournament,

No because irrespective of 2023, we want to do a good job, we have a committed team who want to deliver the most memorable WRWC ever; we want to welcome international fans and we want to use WRWC2017 to grow interest in women's rugby and create the next generation of players and fans. There is great excitement in the IRFU and the people working on the tournament are naturally driven to do the best they can to deliver, so the pressure comes mostly from within the group, rather than any “external” factors.

What sort of added extras can Ireland and this tournament offer fans from the recent efforts in France and England?

We have worked closely with World Rugby to get good quality and range of merchandise available for sale as that is something we felt that there is a demand for.

For the Pool stages, we are also looking at a ticket exchange programme- similar to what they do at the Centre courts in Wimbledon- where fans attending an early match and who are leaving, can donate their ticket back and we will re-issue it, making a charitable contribution. This will help ensure that as many fans get to see some of the action.

As mentioned, we have the fanzones on all match days, the Bring Your Boots festivals and a couple of other initiatives which will be announced closer to the time.

What are you doing to try and make the experience uniquely Irish?

We must host the tournament in line with Rugby World Cup’s policies and protocols, so there are certain things we cannot change.

However, we invited representatives from each of the participating unions to St. Patrick’s Day events in their country. For example, we had Japan, Honk Kong and USA players in the parades in Tokyo, Hong Kong and San Diego respectively; while Australian and NZ representatives attended St. Patrick’s Day functions in the embassies there. The feedback was very positive from those events and gave a real sense of Irishness to their participation in WRWC2017.

As Irish people and fans, it would add more excitement if Ireland progress; as a country, a couple of wins and the momentum would really get going. We saw that for the final Women's 6 Nations match against England on St. Patrick’s Day, where we had a double-header with the U20s and there was a cracking atmosphere in the stadium.

In terms of the Tournament itself though, the appeal is to see the best players in the world play at their best in a World Cup, and we have structured ticket sales to encourage that interest and appeal; so if you buy a ticket for the Irish match in the UCD Bowl on any match day, you get to go to all 3 matches in the Bowl on that day. This is great value for the fans and encourages attendance at all participating unions matches

If you had one key message to fans travelling over to the tournament what would it be?

If you have not got a ticket for the tournament, get one today. I know I see event promoters saying this all the time but it’s true- tickets are selling and, unlike in the 6 Nations when you can usually get a ticket at the gate, there is no guarantee that we will have tickets available.

Anything else you want to let fans know about?

Our central marketing theme is #BRINGIT . We don't want fans to just be passive observers of the tournament, we want them to be active, to bring the colour, bring the flags, bring their support and bring their loudest voices. The teams will bring their best, and we want fans to do the same.