Following the various rumours in recent weeks about the attitude of Italian Federation (FIR), the preparations of the national team for the World Cup and the situation of Italian women's rugby in general. Valerio Amodeo of Italian rugby website Non Professional Rugby spoke to Maria Cristina Tonna, head of the women's division of the Italian Federation. 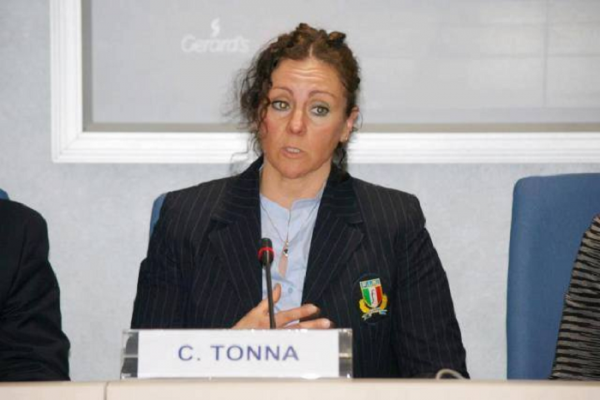 Hi Cristina, although the answer is obvious, we immediately deal with the latest rumour. Will Italy be at the Women's World Cup in Dublin?

The Italian women's team will be present at the World Cup in Dublin as scheduled. This unfounded news has been very unhelpful, creating, among other things, some bad feelings within the squad.

How is Italy preparing for it?

The team has been preparing for some time with a tailored physical preparation. I need to remind everyone that it is only a week ago that the women's league was concluded, and that it was impossible until now to "steal" players from the clubs who were engaged in the run-in to the title. Our staff have prepared training camps, three in fact, all of a longer duration than usual, which will take place at regular intervals over most of July. While in the first one there will be more physical work, in the other two there will be more space for building the team that will play in the Irish World Cup.

Many people (including me) say that the Italian women do not play enough. No tests before the Six Nations, none before the World Cup. Why is this? Do you not think it will affect the performance of our players in the tournament?

Whether or not to play one or more Test Matches should be framed in a broader perspective. In the first place, the lack of test matches is dictated by the difficulty for our athletes, all amateurs, face when presented with demands for long periods of time spent outside the home, work, study or family. This season between Six Nations, Sevens and World Cup we called them for a greater effort than normal, it's inevitable that the preparation had to respect a balance with the demands of the team.

In addition, despite having had some good offers for fixtures, unfortunately they did not materialize because of the different problems agreeing dates between the Unions: Hong Kong, for example, wanted to come to Italy, but just at the time when we were playing the final phase of our Championship, so it was not opportunity we could take up.

Our staff, therefore, in balance with the needs of the girls, has focused on a type of programming and preparation that currently does not include test matches, but trial matches, as well as taking into account the competition calendar. I believe our team can still be confidence and will be ready for the World Cup ready. I trust our staff.

Is it true that there have been cutbacks in the women's game in Italy?

To return to the recent Championship Final, for the first time the game was broadcast live on the FIR channels - a small investment, but still a sign of how the FIR has at its heart the support of the women's game. Among other things, I want to remind everyone how the championship, this year, recorded some important numbers, including a crowd of more than than 2300 people in the stands to watch the final and see the awarding of the Italian Championship. In addition as well as the Italian XVs, we have a programme for the National Sevens, who will play in two stages of Grand Prix series, as well as another Italian Selection who will be at the Roma Seven, and an Italian U18 Sevens.

In September, also, Italy Sevens will again be take part in a tournament in Germany. I don't think that suggests that there have been cuts.

After the World Cup, inevitably, it will be the start of a new cycle. The fear of many of us is that you will not be able to continue the recent advances without changes at the technical and structural level. Can you tell us anything about next season?

I'm sure that the changes always lead to concerns, but I believe that under the guidance of Andrea Di Giandomenico we have demonstrated more strength than in the past especially in an area that has always been a problem of our game, the ability to handle generational replacement. Andrea has already watched many players during the recent season, visiting many women's Serie A clubs, as well as watching various Championship matches, alongside working with the National Team. He is invariably out watching matches on Sundays - it is important for us to stay in touch with teams and the players.

This is the sort of work that we have done for years, along with observation and work in the various regions, both through the work of Regional Women's Developmental Technicians and through the presence of national coaches. Through the various regional committees, the Women's Development team work in support of club activities, they organise regular joint activities, which then come move onto Area Tournaments, which we currently play with at Sevens (Under 14, Under 16, and Under 18).

All of this is just to ensure we have a continuous production line of young athletes who can choose which way to take, though without however giving them illusions: we can guarantee girls a lifetime job, and we cannot speak of professionalism!

Next season, being the one when many blue will retire from the National team, will be the year of reconstruction, as it happens in all teams when it finishes a cycle. We are fortunate to have it always been able to feed this cycle.

Recently in Non Professional Rugby I wrote provocative article: "Women's Rugby in Italy – is it wanted or not?" Because sometimes it seems to us that for the Italian Federation the women are considered a burden rather than an asset. Is that so?

I can say that it is not so, though everyone can have their opinions. All women’s activities are now considered equal to both the domestic and international men’s game, federal projects are among the most inclusive and are always aimed at girls as well as boys. In this regard, I would like to point out that just 10 days ago a prize was awarded to the Federation by Rosa Telefonica for our ongoing cultural actions supporting gender diversity and inclusiveness. If sometimes from the outside you getthe wrong impression, then I would say that perhaps we need to make more efforts to improve our communication.