It’s International Women’s Day this Sunday (March 8) and this year we are highlighting the stories of a selection of women from around the world who break down barriers or face major obstacles in their quest to play and grow the game. Yesterday we heard from a women's rugby player in Laos and today we look at a programme in India which takes the game to disadvantaged communities. 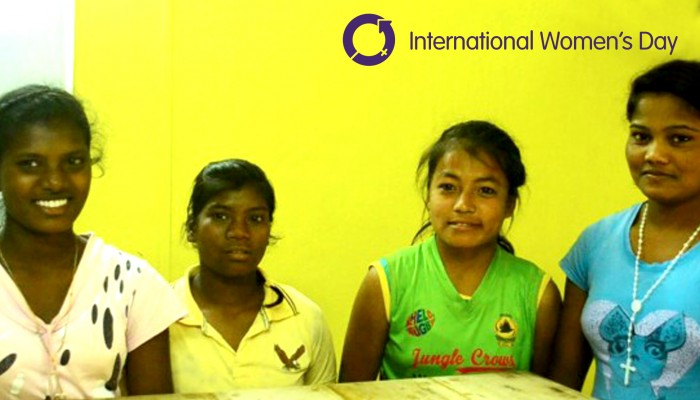 The Khelo Rugby programme, run by the Jungle Crows Foundation in India, takes sporting opportunities to socially disadvantaged communities, most of whom would not normally have any chance to take part in any organised sporting activity, giving children the chance to play and learn together.

Kirpa Oraon (19), Sandhya Rai (14), Sanjana Oraon (19) and Punam Oraon (17) are four young girls from the rural village of Saraswatipur in West Bengal, who are part of the programme. Students at Gajaldoba High School they were introduced to rugby about a year ago by Father George Mathew of the Jungle Crows Foundation.

“People were very hesitant at first”, said Kirpa, “but he convinced them that playing would be great fun and that they could meet new people and learn a lot from it."

“We started with tag and touch rugby, and we were more excited about playing a new game. Soon we started focusing on the tackle format as well and have played many tournaments like the national ones in Bhubaneswar and Nagpur. Now we are going to represent Bengal in the National Games in Kerala. We have travelled a lot through this sport, which was unimaginable. My first big match was in the National U18s in Nagpur where we were runners up. On seeing the medal, my parents were thrilled.

“I personally feel there’s a lot we can achieve by playing rugby and studying. I want the same for the other children in Saraswatipur and would like to motivate them to go ahead in life. My parents too are very happy with what I am doing. They encourage me to help other girls and introduce them to rugby.”

However not all families were initially so supportive and Punam and Sanjana faced some difficulties. “My mother supports me”, says Punam, “but my brothers stop me from playing, because they think that I will hurt myself. I don’t listen to them and when I feel like playing, I run away and play.”

“Initially, my mother didn’t like my playing and would stop me,” continues Sanjana. “I told her that I will play since I enjoy it and she gave her consent only after Amirul Sir [one of the coaches] spoke to her. My neighbour objects to it, but I don’t bother about them and continue to train.”

Rugby has already had a wider effect on the girls’ lives

“There have been many changes since we started playing,” says Sanjana. “We weren’t disciplined, now we have learnt how to behave, how to speak with other people, both elders and those younger to us.”

“I was very wicked as a kid,” adds Punam, “rugby has changed me for good.”

“At the start I wasn’t very fond of some of my [Bengal State] teammates because they were from another village,” continues Punam, “and their team was much better than ours, which made us jealous. Now, we’re a part of the same team I really like them.”

Kirpa agrees. “I didn’t know how to speak properly with others, I wasn’t disciplined, but I gradually learnt all this. The coaches would talk to us and I made it a point to listen to them. They taught us to respect others, as a result we start gaining respect and that we should even respect those younger to us. We should get the younger generation disciplined by showing the same respect and sharing with them the knowledge we have acquired.”

Tea is the main product of the regions, and the chai bagan (tea garden) the main employer.

“In the bagan, the salary is very low,” says Kirpa. “My parents have to leave early for work at 7am. I want to study, work hard and not work in the tea garden and not even let my parents work there. It’s very hard for them. Whatever little they earn is spent on us and our education.

“People in our society don’t seem to understand the importance of exploring the world outside. There is gender discrimination. People think girls can’t play but girls can play and achieve a lot, and with rugby it’s the boys who are left behind. 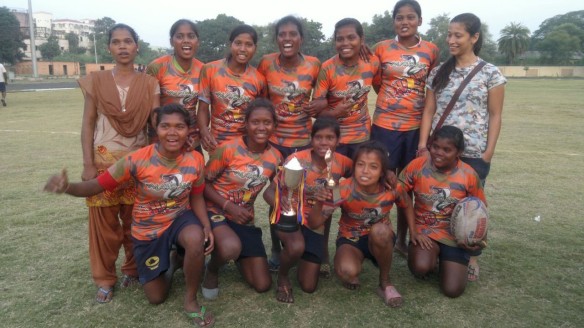 “I don’t listen to them because in my house both boys and girls are given equal chances to play and we are encouraged to do what is good. In Saraswatipur, almost all the girls are interested in rugby. But there are some people who stop us from playing - they believe this game is not meant for girls., but they don’t know all that we can achieve from this.

“When we went to Nagpur and won a medal, some of the villagers said that we bought them instead of winning it. There was no encouragement, all they do is to demean us. We don’t listen to them; instead we only concentrate on our game."

“At times they interfere while we are practicing,” add Sandhya. “They play cricket on the field and have put up a volleyball post in the ground so that we don’t have as much space to practice.”

“They scold us while playing", continues Punam. “They say that we’ll injure ourselves and no one will come to look after us.

But above all rugby has opened the eyes of the girls

“I want to be a great rugby player,” says Sanjana, “and study a lot, at least complete my graduation”

Punam agrees. “First, I want to complete my graduation and become a rugby coach. Finally, find a job outside the village.”

Sandhya's ambitions are concentrated on the game itself. “First I wanted to represent Bengal in Rugby, and I just did that at the National Games. Now my aim is to represent India!”

As for Kripa, “I want to be a good player. I don’t know how far I can study, but I would definitely want to finish my schooling and work extremely hard after that to support my family. Such a long way still to go, sometimes we feel scared about what will happen to us.”

(With thanks to Paul Walsh, Khelo Khelo and the Jungle Crows Foundation)

"People think girls can’t play but girls can play and achieve a lot, and with rugby it’s the boys who are left behind."