Four years ago this week, women’s rugby became a professional sport, with the Netherlands becoming the first group of players to be handed professional contracts. With issues being raised by former players about the legacy of the World Cup and the growing focus of sevens, Ali Donnelly looks at where we are. 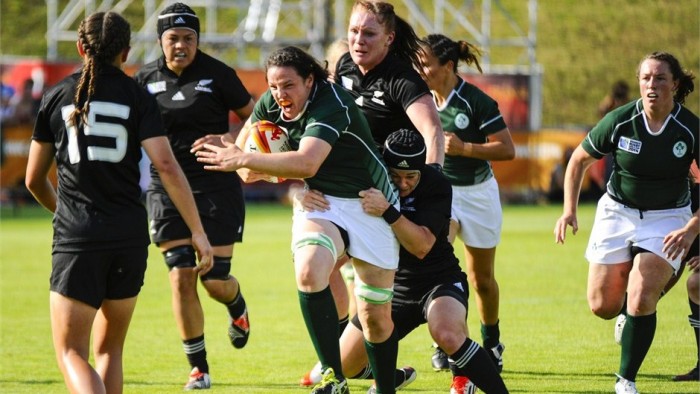 “A massive opportunity has been missed by the RFU,” she said. “We built up a good media profile and won a World Cup, but then they put out weakened teams in the Six Nations and we suffer our worst campaign ever. Just because Sevens is an Olympics sport, why should that mean we have to focus so much on it at the expense of 15s? I’m really struggling with that policy.”

Her views echo those of another former star England player Maggie Alphonsi, who, while choosing her words a little more cautiously, also expressed concerns recently about the focus on sevens, asking the RFU not to “give up on the 15s game”

Both players have legitimate concerns about an increasing focus on sevens not just in England, but around the world, but I’m not sure it’s fair to say that the governing body for the game in England can be accused of totally wasting a World Cup legacy.

Let’s take this issue of legacy first.  Is England’s disappointing showing at the Six Nations and the Super Series this summer definitive enough to say that their World Cup heroics have not been maximised?  I am not sure.

Behind the scenes there has been a major focus on increasing participation over the last year following that success in Paris. RFU figures say that they have added 5,000 players in a year to their playing base– with 20,000 women and girls playing now compared to 15,000 last year – the target is an ambitious 25,000 by 2017. The launch of free ‘Pitch up and Play’ sessions and the launch of the wider women and girls strategy last year hardly smacks of a union resting on its trophy laurels.

Legacy is always thorny to measure. My metric for women’s rugby would have to be based on growth and the figures above are probably enough to suggest that fears of a wasted legacy are a little hasty.

On the other hand, this is an experience being shared around the world – and there are those who argue that England are simply riding the crest of an international wave. Almost every country in the world has recently recorded a rise in player numbers and in many ways much of Spencer’s frustration is well placed.

What I do agree with is that not enough has been done since last summer around the world to push something that ultimately proved to be pretty darn popular. The 2014 World Cup helped to create a product that was ripe to be sold – women’s test XV rugby.

And yet what happened next is that there was less international XV rugby available for fans after the World Cup than before.

Having created a demand for a product, those in charge of our sport around the world then decided to close up shop.

There wasn’t a single official test game by sides who were in Paris between the end of the World Cup in August until the start of the Six Nations in February for instance. And of those tests that did take place, they featured mainly the likes of lower ranked test sides Belgium, Scotland and Russia, hardly enough to drive the appetite of the thousands who flocked to France last summer to watch the elite.

Did anything remotely imaginative happen on the test stage to ride on the tide of interest and build on the product that sponsors and the media might be interested in? No.

Next week a charity game in London sees an England men’s side take on the “Rest of the World”. How brilliant it would have been to see the World Champion England women’s side take on such a concept towards the end of last year or even before the Six Nations - build our product up again and rekindle the passion that was clearly there in Paris? Players of course needed a break after a gruelling year, but there was five months between the end of the World Cup and the start of the Six Nations and a smaller European tournament apart, nothing happened on the test arena.

This point apart, I would not be as harsh on the "England legacy" point as others.They have hugely ambitious targets to grow the game and they should be commended for that regardless of your view on what is happening at the very top of the game. And they are caught between a rock and a hard place.

If you asked the question of how one defines legacy, you’d probably get ten answers.

Is it England continuing to win trophies at test level while also trying to juggle an Olympic programme?

Or is it England developing the highest levels of participation in the world (which is what they are trying to do) as a bedrock to help them manage the two games at test level better in the future, thereby giving both programmes a chance of success?

It is a worthy debate and we shouldn't forget that every nation is feeling their way with this. There is no precedent for this strategy - we have never been professional before and we cannot be compared to the men’s game because we simply do not have the playing numbers or standards yet to effectively create two totally different groups of athletes. Plus our money is almost all in sevens - in the men’s game it is the opposite.

The debate in England simply reflects a wider debate that is happening everywhere in our game and nobody is quite sure they are doing it right and it is a useful way to look at what's going on in our sport.

When it comes to sevens v XVs, I have long expressed concerns that  the short term focus on the Olympics could damage the fifteens game at test level. That is still very much my opinion and the standard of this year’s Six Nations and Super Series compared to what we saw at the World Cup bears that out.

It is true that the focus on the Olympics has accelerated to a point that those involved in test XV rugby in leading nations have legit concerns about priorities.  And it is true that there is more money flowing into women’s sevens now that some established XV test nations could never even dream of.

But these wads of cash should come with a health warning.  This funding has a very shallow foundation. Olympic funding from NOCs and other funding bodies can be cut as sharply as it is lavished if targets are not met. England have underperformed at the last two sevens World Cups – if Great Britain does likewise in Rio, this debate may well disappear.

There are growing crowds at international games and growing player numbers around the world and more TV exposure than ever, but we all know about the lack of financial support generally for women's sport even when there is a good case.

That is a drum that everyone must keep pushing for XV rugby.

We need to see a recognition that while growing the game at grassroots level is proper, essential and right; it is packed stadiums, and media exposure that helps to fuel even more support and crucially investment.

The Women’s Sevens World Series is still rather a damp squib on this front (though it is early days) with the standalone events delivering small crowds and little individual broadcast interest, but  the World Cup in Paris – and London too in 2010 – showed us that with the right marketing and right standards, the appetite is there for test rugby.

We have a product that is not being exploited. There are still no test rugby windows for the women’s game; still no major tournaments outside of the World Cup organised by World Rugby and developed nations like Ireland - currently the leading side in Europe - more often than not go from the end of one Six Nations to the other without playing a single game.

That is not sustainable if we want to generate the investment we need in XV that sevens has in spades right now.

Chasing the IOC dollar and a chance of Olympic glory two years down the line isn’t enough to sideline that.

"Olympic funding from NOCs and other funding bodies can be cut as sharply as it is lavished if targets are not met."