In the form of her life, we spoke to England's playmaker Katy Daley-Mclean who talks professionalism, her desire to play on,  England's young guns and what the future holds as well as looking ahead to this weekend's game against France. 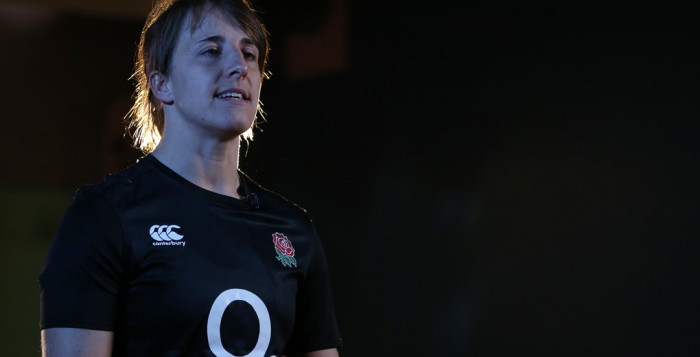 Katy Daley-Mclean is too modest to say she is playing the best rugby of her life, but England’s outstanding fly-half agrees she has found something extra over the past year.

“I think I am at my most consistent right now.  When I was younger I might have a really good game one week and then not  back it up the next. Now I feel much more in control and I am really enjoying it."

Daley-Mclean has been in brilliant form for England in this 6 Nations, as she was throughout the entirety of 2017. The 31-year-old admits that thoughts of hanging up her boots at the end of the Word Cup crossed her mind, but her form had been so good all year that they were easily banished.

“It was something that was at the back of my mind but I felt I was in good form last year and even though the World Cup ended in disappointment, I was happy with my overall game. I have three markers set for myself that will determine how long I go on playing for England. Am I enjoying it? Am I good enough? And do the coaches still want me? Right now I am hitting all of those and it’s a great place to be.”

To France this weekend, and Daley-Mclean says the away fixture is one of her favourites.

“I love playing France and this set of fixtures with France, Scotland and Italy away is always my favourite Six Nations year. The crowds are always passionate away from home, especially in France. It’s what it’s all about. It's called Le Crunch for a reason."

She has no problem vividly recalling her favourite game in France.

“It was an incredibly tight game and I kicked a penalty to put us ahead. France had a chance to win it, but the kick fell short and I was able to kick the ball into the stands. Amy Turner came running at me to celebrate and instead in her excitement, she knocked us both over.  There’s a picture of it somewhere. It's those kinds of memories you take with you and you live for games like that.”

She knows France present a serious obstacle to England’s title hopes on Saturday.

“The benefit to being three games in is we both have access to lots of footage so we'll both be well prepared for what the other has to offer by the weekend. They've done very well. They have a different team to the team we last played at the World Cup but similar coaches so we will expect them to run hard lines, keep to their feet and be very competitive around the breakdown.

“When you have players like Safi N'Diaye and Romane Menager in the back row you have players who can run pretty hard at you but are also excellent handlers, so yes they can run but they are also very effective around the edges with a tip-on pass, things like that, so we need to be alive to all of that and the threat they pose.”

The last time the teams played England came out 20-3 victors in the World Cup semi-final.

“That was such a tough game. I remember going in at halftime and thinking there is absolutely no space here,” she recalls.

“The way the score ended up didn't really reflect it. I think it's important to remember how they will have felt then going into this one, we were obviously elated but it won't be a happy memory for them.”

Post World Cup seasons always throw up new talent, and England are no different with players like Ellie Kildunne and Charlotte Pearce bursting through.

“It's been really refreshing to have them in. We had a really tight knit group last year because you spend so much time together in a World Cup year and now we've had all these new faces come in and give it a really new energy - they just want to play and enjoy it.”

If she had to give herself some advice all those years ago when she was starting out what would be it?

“It would be not to rush my development. I wanted to be the best ten straight away and I probably didn't realise the patience needed. I had to learn my trade through experience .You have to build it up and I am really happy with where I am now.”

Daley-Mclean is one of the few players who has experienced professionalism in both the sevens game and the 15s game, having been contracted to the Olympic squad and then the World Cup squad. She is back working as a teacher now and is impatient for the 15s game to keep progressing.

“I want the game to become professional. The intensity of the training we do now has gone through the roof and it's harder and harder to be able to keep that up and work. We are right on the edge now aren't we? We've had a taste of professionalism and it seems to be that the only next step has to be a semi-pro or pro model for the game. Otherwise we go backwards.

“After the World Cup last summer I was frustrated to find myself repeating what I had said after the World Cup in 2014, about how the game needed to move forward. I don’t want us to be in the same position in three years time - so we are at a really important juncture for the game.”

One positive step has been the progress of the new Tyrell Premier 15s and Daley-Mclean has praise for England’s new top league.

“Actually it's been a surprise to me how well it's worked. I wasn't sure that 10 teams would be competitive and what you've ended up with I think is a top six and then a bottom four, and that's very similar to lots of leagues and I think the quality of the players we're unearthing is proof that's it's working - someone like Charlotte Pearce for example getting picked up for her club form.  That’s just great to see.”

With a renewed love for the sport, the Darlington Mowden Park Sharks number 10 also has a new surname this year, having gotten married recently, and she says that has her life has changed over the years, she has been lucky with the rock solid support she has had from family and friends who have helped her develop a real balance to her life.

“I have always been lucky with the people around me. If they thought I wasn't getting the balance right they would call me on it very quickly.

“Your priorities change as you get older. From 21-28 rugby was everything to me, I let it define me, but I have a different perspective now. If the France game this weekend was my last game of rugby I would say, how lucky am I to have played so often for England and captained my country? If that was a few years ago I would have been terrified of losing rugby - it was everything. This is a great place to be.”

With Daley-Mclean pulling the strings this weekend, England are not in a bad place either.