England start Harriet Millar-Mills speaks to Scrumqueens about training professionally with the national team and the future possibilities presented by the new women's Super Rugby competition. 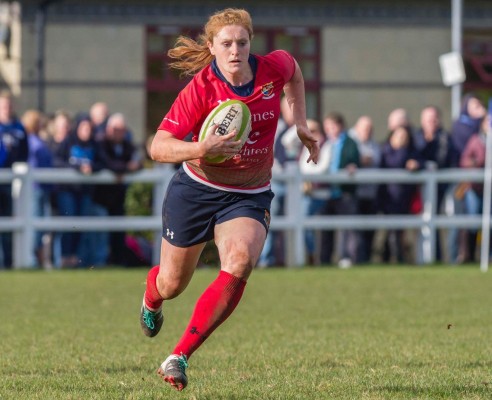 “People think that the England set-up has been professional for ages but it hasn’t. It’s not been 15s focused, it’s been predominantly 7s focused on the professional side. People forget that.”

She is, of course, referring to England women’s domination of this years's Six Nations – the first time in history a nation has fielded an entire 15s squad on professional contracts in the competition. Galvanized by the return of players from the 7s programme, the Red Roses showcased their high quality ability on the pitch, a winning formula in which number 8 Millar-Mills played an instrumental part with her strong ball carries, among other assets.

Her words reflects the ambitions of an opportunistic England Rugby (union) breaking new ground in extending professional contracts beyond the parameters of 7s. In this all important, World Cup year of 15s rugby, Stockport-born Millar-Mills has seen the effects of turning professional for herself.

“It’s the time we have together that you notice the most. As a forward pack we’ve been together for about two years, not professional, just in the same squad.  So it’s just combining that with the backs coming in.

“In Autumn we started to feel it was tying together. That’s probably been the difference for this year's Six Nations – the time that we’ve had both on and off the pitch as a squad, and having more time to rest. It’s been a real morale booster.

“England have been so supportive and put a lot of money in, although we were acting as professionals before we became professional. That’s exactly the same for other nations."

Training full-time in the England set-up has seen Millar-Mills temporarily leaving her job at a school in Banbury, where she teaches maths in a secondary school.

“I wouldn’t ever call teaching easy, but it’s fun, they keep it entertaining,” she says. “Some of my pupils came and watched against Italy in the Six Nations which was nice.”

From a domestic perspective, the new Women’s Super Rugby league, which kicks off in September, represents another initiative to grow the profile of the women’s game.

To what extent will this new league align itself to the men’s premiership? In this unexplored territory of women’s rugby, could we see double-header women’s matches played at big stadiums, like Saracens and Harlequins at Wembley, or Welsh teams from the Pro 12 at the Principality? Lichfield drew in a significant crowd in their last Premiership match of the season against Richmond recently, but Millar-Mills isn’t entirely convinced.

“Obviously with the new league and the way it builds, it’s would probably be the way it’s going. Based on the men’s setup, it’s probably something where it’s going to go, increasing participation and interest in the women’s game and growing the profile of it.

“You wouldn’t want to compromise the atmosphere for the name of a stadium. But I feel like women’s rugby could go in that direction.”