Cath Spencer's much awaited autobiography is published on Thursday. We've had an early look. 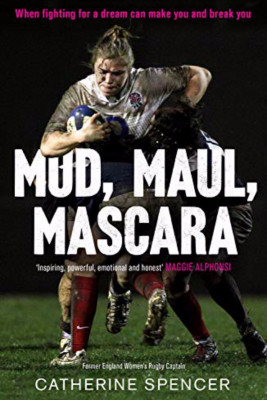 Sporting books remain one of the biggest areas of publishing, and rugby is one of the most popular of the literary sports. Biographies, histories, player guides - there are hundreds of rugby books out there – Amazon lists 75 pages of titles.

But you will have to search hard for anything about women’s rugby. The number of books published on the women’s game can be counted in the fingers of one hand.

And three of them are in French!

As a result it would be wrong to say that Catherine Spencer’s excellent biography fills a gap any more than a pebble helps to fill the Grand Canyon. But it is a start – and a very important start.

When England’s women’s teams can now fill rugby stadia it is remarkable how recently the game was almost invisible.

Catherine’s rugby career – and book – takes us back to a near forgotten era when girls interested in sport had practically no-where to play, when free tickets for England internationals could literally not be given away on national radio, when daring to question your own governing body could result in you being blackballed, and when World Cup finalists were asked patronising and remarkably uninformed questions on the Today programme - the BBC's flagship current affairs programme.

Then from the touchline and the commentary box Catherine watches, she writes with real honesty about her mixed feelings as England achieve the World Cup triumph that she missed in 2014, and how in her view, the decisions made by the RFU failed to build on that 2014 triumph.

There is also here a tale of the stresses and emotions of a talented sportswoman reaching the peak of her sport, and finding a way ahead afterwards, of the power that rugby has to inspire, and the sexism that women and girls in sport can face.

The book itself perhaps an example of what Catherine has faced. Publishers willing to put money into authorised ghost-written biographies of male players were somewhat less interested in the truthful and honest story from one of the most talented and articulate sportswomen of the past decade. Instead the book is the result of a crowdfunding campaign.

But this is no piece of vanity publishing. This is a honest and highly readable book that will win Catherine few fans in the higher echolons of the sport, but it is a unique story of women’s rugby at the top - as it was, and as it is.

It’s a must-read for anyone interested in women’s rugby and women's sport more widely.

The number of books published on women’s rugby can be counted on the fingers of one hand.

And three of them are in French!