Achievement in women’s rugby at international level – especially at fifteens – is dependent on more than to coaches and camps for the leading players. They may not attract many headlines but talent identification and player pathways for teenagers and young girls are the essential to long term success, and two countries a world apart are launching new structures with that in mind. 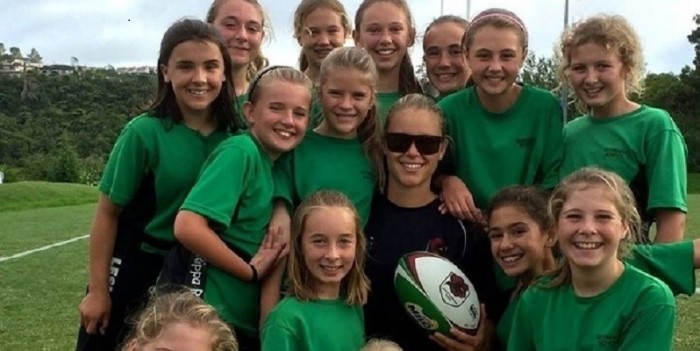 England’s World Cup win in 2014 – and come to that the performances in 2010 and 2006 as well – have been put down to many things, from Gary Street and his coaching team, to the wonderful crop of players, and the resources the RFU made available to the team. But one factor is rarely mentioned is the RFUW and later RFU talent identification and player pathway that just about every player in the squad went through from their early teens, if not before.

Player pathways are not headline grabbers, partly because they take perhaps a decade to achieve results on the international stage, but they can be essential to winning trophies as a top coach or a state-of-the-art training facility.

It is therefore perhaps not a co-incidence that two countries a world apart – Wales and New Zealand – announced new initiatives in March. No-where on Earth is rugby so central to society as New Zealand, and with everyone eating and breathing the game practically from birth, women’s rugby in the country had a huge advantage from the beginning.

So fifth place in the 2014 World Cup came as a shock to rugby authorities in a country that had tended to take the success of their women’s teams almost for granted. Success for the Ferns had been such a given that, as Dana Johannsen recently reported in the New Zealand Herald, the future development of the women’s game had “long been an afterthought for rugby bosses, with very few unions having formal pathways in place from the junior grades to senior level. In a familiar sounding story she said that “those regions that did have successful women's programmes in place often relied on the passion and enthusiasm of one or two key individuals to lead it.”

This has been evidenced for years in the player numbers of the country. New Zealand has – for as far back as data is available – always had a huge number of girls playing rugby. In the latest figures a remarkable 18,000 girls are registered with the NZRU – meaning that they will be playing rugby regularly, not just tag in a couple of PE lessons once a year. Taking into account the size of the country no-where else in the world comes close to this saturation level of junior girl’s rugby.

But at senior level there are only 1,000 players. Taking the population into account this is one of the lowest numbers of adult women players in any major rugby nation.

To address this remarkable drop-off in March 2015 the NZRU appointed Cate Sexton as New Zealand Rugby's first women's development manager. "My role is to make sure post-Olympics we can support the provincial unions to have structures and pathways in place, so when a girl says, 'I want to play with the oval ball' there is that opportunity for them at any level," says Sexton. "A lot of unions are doing some really good things in the junior space. As those kids develop a love and an interest and confidence in the game, it's about how do we push that through to when they move into high school? Because that's where it gets a little bit tricky."

A recent survey of secondary school girls showed, contrary to the stereotype held by many in New Zealand rugby, they have a high level of interest in rugby and are keen to play, or continue to play after school, but do not have the opportunities as there is no pathway for players not lucky enough to have a girls’ school team or local club.

Four regional staff have been appointed to support Sexton and to the growth of the women's game. A pilot scheme is also about to get under way in the Bay of Plenty. "Creating pathways is the critical part for us,” Sexton says.

There have already been pockets of success around the country. Last year, North Harbour introduced girls-only “Rippa Rugby” for ages 7-12 and had 77 teams competing in the primary and intermediate school tournaments. "To have just as many girls' teams running around playing rugby as boys' teams was pretty cool," said Chelsea Alley, the union's women's development officer who combines her role at North Harbour rugby with her own playing commitments with the Black Ferns.

That momentum has carried through into the secondary school grades, with North Harbour introducing a sevens competition for girls on Wednesday nights. Alley also runs a 10-week development course for players at under-15 and under-18 level that focuses on talent identification as well as skill development, nutrition, strength and conditioning. In addition, two new adult teams have been formed in the Auckland area, and North Harbour will re-enter the women's NPC competition for the first time in a decade.

Alley said it can be a challenge to convince clubs to run teams for girls and women, but believes attitudes are slowly changing. "There are still a few older guys around who are a bit resistant to investing in the women's game. I guess it takes a bit to get their head around girls playing rugby and that it is growing so fast. But there are others who can see the value in it and it has been really cool to see the switch in their thinking as well."

18,000 miles away perhaps the only other nation with a similar obsession for rugby has similar challenges. Wales have had a pathway – modelled on that of England - for some years but they too have problems with large numbers of junior players dropping out because of lack of opportunities to advance to the next stage.

Caroline Spanton, WRU’s National Women’s Manager, explains: “The current offer for girls to get involved in rugby is through a mixed only rugby pathway at Under 7’s through to Under 13’s. We then see a huge drop off at this point due to a lack of opportunity for girls to progress as Under 15’s is not always available so many girls lose interest and choose an alternative sport. We also have relatively small numbers playing within the mixed setting and so it appears that the current offer isn’t suiting girls who may like to play but just with girls. Feedback and research has also shown that playing mixed rugby does not suit all girls especially as they mature and therefore we want to trial introducing a girl’s only option in the spring and summer months to see how it is received.”

As a result girls-only rugby will now be offered from U9, instead of U14 as now. “Mini rugby” for U9-U11s and “Junior rugby” for U13s-U15s will be on offer in specially created “Pathway Cluster Clubs” across the country, who – as another new initiative – will play in the spring and summer.

“Girls can still play mixed rugby,” Spanton makes clear, “we are not restricting the offer, only broadening it. Mixed rugby will continue in the autumn/winter within existing mini and junior sections of rugby clubs with the girl’s only rugby option in the spring/summer.

The cluster clubs will be crucial. “Due to the current numbers playing we do not want to try to set up junior teams in every club. To ensure growth is managed and sustained for the long term “cluster rugby centres” for Under 9s to Under 15s have been established in strategically placed areas that will allow teams to consolidate players and achieve sustainable growth with the right volunteer infrastructure to support and allow us to test out the interest in mini girls-only rugby. They will be neutrally branded to stop issues of parochialism and ensure cross community collaboration and provide a sense of belonging for the girls.  Every rugby centre will be strongly linked to appropriate feeder parent Under 18 and senior clubs and we hope that the new developments will feed more players into youth rugby and retain players so clubs have healthier numbers.”

The switch to spring/summer is also important: “Currently girl’s rugby competes with traditional school-led sports such as hockey and netball and so by offering it at a different time of year it will allow girls to continue to play these sports if they choose and then can still get involved and play rugby during the spring/summer months. The weather is also a big factor as it will hopefully allow more rugby to be played and will encourage more girls to get involved due to better environment. We also hope it will enable rugby clubs to be busier during quieter periods to create thriving clubs. The season will run approx. early March through to July.”

As for talent identification and development, the existing regional programme will now run for longer to provide the stepping stones between the new U15 programme and the U18 and adult game (which will continue to be winter sports).

The new structure is explained best in the following diagram: Will it all work? Spanton is honest: “We don’t know! But we have an opportunity to try something different and this will be an evolving pathway as we develop and grow and we have the flexibility to adapt according to needs and demands. Girls are encouraged to register their interest by e-mailing playrugby@wru.co.uk and we will keep you in touch with the new developments as they arise.”