Many would be surprised to read that women were playing rugby before the 1960s. I mean, I occasionally still get those who live under rocks who ask if women play rugby now! But the readers of Scrumqueens will be familiar with several examples of women playing rugby way back when, and this list is a nod to some of those pioneers. 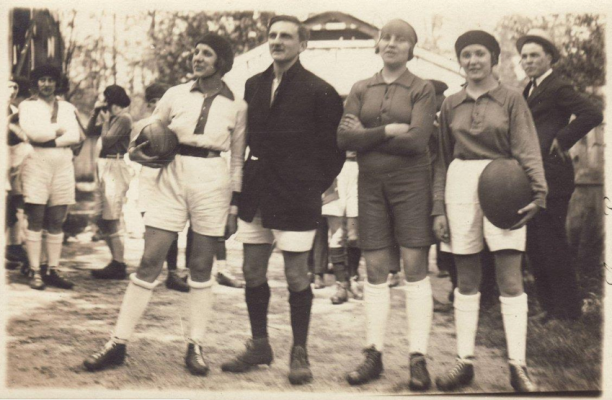 Dr Marie Houdré, pictured on the left next to André Theuriet, the co-developer of Barrette.

Nita Webbe, an entrepreneur in Auckland, New Zealand, attempted to mount a touring exhibition of two rugby teams of women players in June, 1891. Promising to pay players, girls and young women were recruited from all over New Zealand to learn the game, with the intention to then travel the country playing games in front of paying audiences, in New Zealand, Australia, and potentially other countries of the British Empire. However, the games never took place. Some have argued that women playing rugby was not socially acceptable at the time, and that is why the venture failed. Whilst there was significant negative press, some critics arguing it was immoral for young women to make such a spectacle of themselves, whilst others cited concern for the women’s safety playing such a violent game, the backlash would only have fed public curiosity in what was after all, exhibition matches designed to draw a paying audience. The enterprise was most likely cancelled due to the Webbe family’s financial difficulties. It seems that women and girls had arrived in Auckland and even begun training, but never got the chance to play a game of rugby in public. Nita Webbe’s enterprise was not designed as a foundation for competitive women’s rugby, but offered an exciting opportunity for some young women to travel and train, even if an audience never got to see them playing rugby.

Dr Marie Houdré worked with André Theuriet, a former French national team scrum-half, to adapt the rules of rugby union for women, developing a new sport known as Barrette. Barrette maintained many of the characteristics of rugby, including the ball shape, method of scoring tries, and tackles at the waist. Marie Houdré captained her team, the Hirondelles (the Swallows) in numerous matches, and coached both teams at Fémina Sport, a women’s sports club in Paris. After an exhibition match in 1922, Barrette grew in popularity, being played in Paris, Lille, and as far south as Toulouse, with teams contesting for a national championship. In 1923, the French Rugby Federation banned their clubs from allowing barrette matches on their pitches, but the game continued in women-only sports clubs, and although the ban does not appear to have been officially rescinded, a barrette match was even played as the curtain raiser to a very popular men’s rugby match between the French Army and Paris XV in 1928. Marie Houdré used her medical credentials to popularise barrette, arguing for the enormous health benefits of young women playing this version of rugby. Unfortunately, the game disappears from the public record during the 1930s, and women’s rugby in France would have to wait until the 1960s to see a resurgence. Marie Houdré was symbolically the first name in the new French Rugby hall of fame (2019).

There is some footage available via British Pathé: https://www.britishpathe.com/video/peace-and-pace

In Wellington, New Zealand, Phyllis Dawson decided she had had enough of the men having all the rugby playing fun. Founding and captaining the Wellington Ladies Rugby Football Club in 1921, Dawson helped organise two fifteen-a-side matches in the first season, and hoping for more support from the local men’s rugby union clubs in 1922. Dawson attempted to secure a seven-a-side match as a curtain raiser to a local men’s match, but the club faltered and disappears from the public record. The lack of opposition, lack of material support from the local men’s clubs, including access to pitches on which to play and practice, limited Phyllis Dawson’s rugby playing ambitions.

Pioneers of women’s rugby were not only determined women. Men played a vital role in supporting female rugby players, as is the case of Mr Triggs and Mr Hillman, of Newport, Wales. Both men acted as coaches to the first teams of Newport Munition factory workers to form women’s rugby teams, initially named Mr J. Trigg’s XV and Mr J. Hillman’s XV. With many of the men away fighting in the trenches during the first world war, the Welsh public were starved of rugby, and the women’s matches became popular spectator events, drawing crowds of up to 10,000. The Newport players initially played exhibition matches against one another, inspiring the creation of a team at Cardiff. Trigg’s and Hillman acted as linesmen for well-known Welsh referee Russ Pollock at the Cardiff versus Newport game in December, 1917, which the Newport team won 0-6. Despite the popularity of the women’s rugby matches, the games stopped after the armistice, as Maria Eley, a Cardiff player, recalled: ‘We loved it. It was such fun with us all playing together on the pitch, but we had to stop when the men came back from the war, which was a shame. Such great fun we had.’

Perhaps the most famous pioneer, Emily Valentine stepped onto the pitch in 1887 as part of her brother’s schoolboy team. At just ten years old, Emily took advantage of a gap in the line up to fill in the wing, and even scored a try. Her memoir, written as a grown woman, provides an exhilarating recollection of the moment she ran with the ball, creating a brilliant counterpoint to the myth of William Webb Ellis ‘inventing’ rugby in 1823. Since her story was first published here at Scrumqueens, Emily Valentine has become the semi-official first lady of rugby. Whilst her actions cannot be linked with the modern version of women’s rugby as we know it today, just as the other pioneers above, Emily Valentine seized her chance to step onto the pitch at a time when rugby was played (almost) exclusively by boys and men.

Whilst these pioneers did not pave the way for the game we know as women’s rugby today, their inspirational stories can serve as models for those who, in some cases, continue to face prejudice against women playing rugby in the modern world.