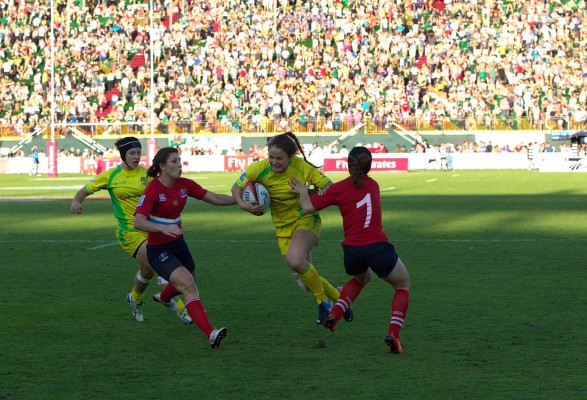 Australia are the team to beat in Atlanta as they top the rankings after round one after their stunning win in the final over New Zealand. Plenty might say that the Kiwis shot themselves in the foot with a raft of early substitutes but Australia had been powerful all weekend and in Rachel Crothers they have unearthed a superb young finisher who will surely be a name for years to come to watch in the 7s game.

Last year USA were spurred on by their role as hosts and went all the way to the final in Houston. There have been many changes to Ric Suggitt's squad as they look to develop a pool of players capable of pushing hard and peaking in 2016 and they will be looking to at least push on from the 6th placed spot they managed in Dubai.

Canada were semi-finalists in Dubai and with most of their squad back fit and healthy, they will always be there or thereabouts at these competitions. This time around they also welcome back two of their most experienced players - Jen Kish and Mandy Marchak - who both missed Dubai and that duo adds real steel to an already strong Canadian outfit.

At the time of writing China have not published their squad, and it will be interesting to see how many of their squad from last season they have retained - they do seem to turnover players. Partly as a result, despite the amount of exposure China have had in previous WSWS and IRB tournaments, China have made little real progress on the field and were narrowly beaten by Japan in the Asian Championship in November. However, they have adapted and in their last WSWS tournament in Amsterdam last season it was interesting to see them start to adopt a more physical style. A quarter final place seems unlikely, especially give this pool - their target will be a good finish in the Bowl.

Pool B: New Zealand, England, Ireland and the Netherlands

Despite losing the final in Dubai, New Zealand are probably still favourites in Atlanta, and they will been boosted by the fact that their players have since gone part-time and are training together regularly in Auckland. There are 19 players contracted now with Sean Horan adding depth to his talented group. Horan has named a strong squad as ever for Atlanta but has also included two teenagers whose progress will be worth following.

Despite their involvement in the Six Nations, England have a pretty strong squad for the next two weeks with Heather Fisher, Nolli Waterman, Claire Allan and Micheala Staniford all likely to have been top picks even if England didn't have the a 15s programme clash.  They will be in a much better position to contest New Zealand for this pool than expected.

Ireland are facing a tough tournament, though they are building their playing pool with a raft of new faces. With players like Alison Miller, who was outstanding in Dubai,  away on 6 Nations duty, and with seven players making their debuts this weekend, this could be a very difficult pool for the Irish.

Since losing their place as a core World Series team, Netherlands will have been focusing much of their attentions preparing for this competition. Their progress will have been aided by new head coach Chris Lane who joined from Australia in recent months. The Dutch were one of the first squads to train fulltime and they will have no shortage of buildup to Atlanta - their challenge is to make up for a poor showing in Moscow last summer.

Russia topped their pool in Dubai, when they also faced Spain, and went on to finish third overall. The sheer physicality of the Russians is now legendary, with players such as Baizat Khamidova a standout star of women's sevens. But there is more to Russia than just power, with some trully skillful players such as Nadezda Yarmotskaya on offer. Pretty much certain of a quarter-final place, their game with Spain will be a crucial indicator about where the power in European Sevens now lies.

No country have successfully tackled the transition between sevens and fifteens better than Spain, and they have the ability to go all the way in any tournament. In style more of a traditional women's sevens team, they rely on speed and footwork rather than sheer power, and benefit from huge team spirit as well as having had three of their leading players playing in New Zealand for the first half of the season. Sixth place in Dubai will have been disappointing after they finished as the leading European team in the World Cup. One curiousity about Spain is that they have never beaten England in any competition, regardless of how strong the English selection has been - an indication that sevens is often played in the mind as much as it is on the field.

Brazil have improved significantly in 2013, drawing with Canada on their way to a quarter-final place in Dubai, and then pushing Spain all of the way in the plate. Increased investment and improved coaching is having an effect and it will be fascinating to see whether that advance has continued in the break since Dubai. Since Dubai the Brazilians have also foresaken several opportunities to compete in South American tournaments in he interim, instead concentrating on internal training and competition. The right decision? Atlanta may reveal all.

In November Japan narrowly won the Asian Championship when they beat China in the second leg in India having lost to the same team in the first leg final. However, as has proved to the case for other Asian teams, Japan may find being the best in Asia is some way from being a leading team in the WSWS. In addition, and alone among their competitors, they did not compete in Dubai - their last World Series appearence was in China last season, where they finished ninth. Improving on that position seems unlikely, especially given this draw.