Players came from all over the world to the first Women’s Rugby World Cup, 25 years ago this week. Pioneers of they game they did not know what to expect. We spoke to three them - Jennie Öhman (Sweden), Federica Bortolato (Italy) and Isabel Perez Garrido (Spain). 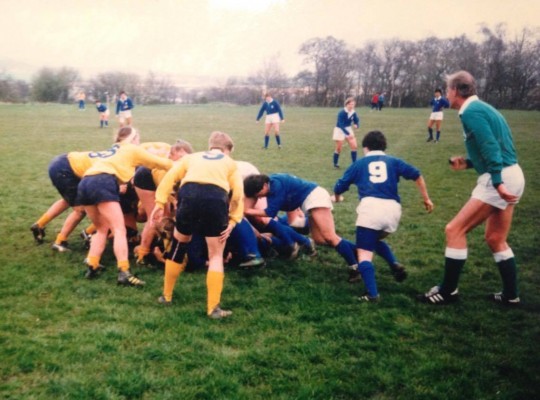 Women’s rugby was still in its infancy in 1991. The women who played in the first World Cup were true pioneers. They had no role models to follow, no history to inspire them. In almost all cases they were the first generation of women from their countries to ever play rugby. They were certainly the first to play the game at international level – the first ever test had been played less than nine years before.

So we started by asking how they started playing rugby.

Federica Bortolato (Italy): I started by chance, like so many other girls. I had a younger brother who played in Mirano and I, like a good big sister, went to watch him at his training camps and games.

One Sunday, immediately after his under-17 game, there were girls playing. I stopped to watch. I am curious by nature. Nonconformist by nature. Headstrong by nature. Immediately after the girls asked me to come and try to do a couple of workouts with them. From that day the disease of rugby came into circulation. It was 1988 and I was 22 years old.

There was no cure, but really, you can't ever heal. Even now, I watch the matches at the stadium or on television and when see mauls and rucks  I cannot help but think about how much I'd love to be on the field again.

I played in Mirano for two seasons, one as Captain; I fell in love with the sport, although several people told me that it was “not a sport for women”. In 1990, surprisingly, came my first call up. We played one game that year, in Birmingham. I remained on the bench, but it was the beginning of a wonderful adventure. The following year, 1991, there was a turning point for women's rugby: the first World Cup and, at the same year women’s rugby was recognised by the Italian Federation.

Isabel Perez Garrido (Spain):  I started at University. I was in first year of Sport Sciences and I had been an athlete (sprint and heptathlon ) since I was twelve years old, but I thought I should know more about the world of team sports if I wanted to be a better professional.

And there it was, a new born rugby team at my University. I heard about that and I went to see a training session. There was a coach from New Zealand who was working in Madrid around that time, leading the session - his name was O`Reilly. What I saw appeared very enjoyable and I thought I was going to have a lot of fun with that. This was around 1989.

Jennie Öhman (Sweden): I start to play rugby in 1986 thanks to a relative of mine had a friend who was playing. I also played handball, another physical game, and I thought it would be fun to try another sport. Then in 1991 different club coaches in Sweden were asked to select the players they thought has the skills to represent Sweden in the World Cup. The preparations were in several training camps during weekends and from these camps the World cup squad to Wales was selected.

So how did you prepare for the World Cup?

JO: As I said, there was a few training camps during weekend but we had unfortunately not so many training games before the World Cup.

IPG: The team at my University (INEF Madrid) was almost brand new, with most players my age. As  it was a team from the Sport Sciences University the girls had quite good athletic conditioning. Even so it wasn´t easy to get selected for the National team as I hadn´t played rugby for very long, but finally I was. After that I kept training in the gym and in the athletics track with my fellow athletes as well as training with several coaches on specific rugby skills (tackle, pass, two-on-one, etc..), trying to improve as much as possible and at the same time training and playing with my team.  I was very proud to take part in a Rugby World Cup.

FB: By 1991 I played for Vicenza, which needed a 120 km round trip, three times a week with a game on Sunday... So I was already willing to sacrifice time and money in favour of the kilometres needed to reach a place where I was in a team. The call for rallies in preparation for the World Cup encouraged me and my companions at Vicenza. We were small, we used to play a fairly simple form of rugby, but we had a grit and determination that we hoped would overcome all technical deficiencies.

What are your memories of the 1991 World Cup?

JO: The first World Cup was very exciting with a lot of new opponents. The Swedish national team had played mostly against Germany until that time. Our win against Japan was a nice memory, and I also remember that the French women were a little rougher than I had experienced at that time!

FB: I have some many memories of playing with the Azzurri: from training camps where we stayed together to cut down costs, the evenings spent rehearsing the national anthem, the remarkable performance involved in cutting and sewing badges on blue jackets which had been designed for men, and having to shorten all the trousers that we had been given... But we didn't mind that if we could play.

Athletic training had been more or less in our care following the guidelines of Andrea Fabbri (our coach) and Marco Fogli (our doctor, though he could also transform - depending on the need – into our physiotherapist, dietitian, and psychologist).

Of the World Cup itself I remember so much, so many emotions, so much disbelief to see that around the world there were so many other girls who were like us, that were confronting the idea that rugby was a sport for males only. I have memories of matches, thrilling anthems, energy and satisfaction. I came back from the tournament with the bag full of shirts, shorts and socks of opponents and with a heart full of emotions I'll never, ever, forget.

IPG: I remember playing a warm-up friendly match against New Zealand before the start of the Championship. Their coach from New Zealand was O´Reilly, the one who had been in Madrid one and a half years before! I remember Ana Richards playing in that team. The score was 0 - 0.

Of course I could never forget my first international match against Japan playing as a wing and getting two tries.

It was also very shocking to see the team from the Soviet Union selling souvenirs in order to be able to pay for their stay in Cardiff (or so they said). Political changes were coming in that country.

And I remember the final between England and USA at the big stadium, and the number 8 from England (Gill Burns, I think) being the kicker of her team.

The “third half” of every match was very friendly, full of songs and hugs and friendship between players from different teams; as was the final dinner.

How has women’s rugby changed since 1991?

IPG: Nowadays, the players are a lot more skilful and also much faster and stronger. Kicking has improved a lot. Also there is much more continuity, volume and intensity in the game.

Overall I think the women’s game has evolved the same as the men´s game has evolved. Everything is more professional; players, staff... And also I dare say that the relation between players in the “third half” is also different!

JO: It is amazing how much the women’s rugby has changed since 1991. More structured and technical way of playing the game.

In the breakdowns you can also see a huge difference in the play. Earlier we joined breakdown from all angles and there was much more mauling than rucking at that time.

The scrum in 1991 was more a way to restart the game than today when it is much more technical and you put so much effort in the engagement of the scrum than before, it is more frustrating but also much safer than in 1991. The line-outs was also a way of restart the game, it was more static not dynamic as it is today. The kit has also changed from heavy, big cotton jerseys to the slim kits that we have today.

Everything is faster, more technical, more dynamic and you don’t leave anything to chance today.

FB: Today Italian women's rugby is very different. It has grown a lot, has spread in many new place and the girls that we are coming into the game do so more naturally. The technical support for who now follow the girls are very prepared and above all believe strongly in their efforts; the Federation takes into account the women's sector and the results are really encouraging.

The Azzurri I see still today have the same determination that we had, the pioneers of the sport; perhaps not everyone knows that someone before them traced a path from where there was no road, maybe not all know how was tiring sometimes it is to take a path that is unexplored.

But seeing them play I get excited as much now as then. To see them winning Six Nations matches made me realize once more that all that effort (and that satisfaction, and that fun ...) have certainly produced some fruit!

Rugby has marked my life and has definitely changed it for the better, and if I could go back, I would in a heartbeat. No doubt about it!

"Rugby has marked my life and has definitely changed it for the better, and if I could go back, I would in a heartbeat. No doubt about it!" Federica Bortolato (Italy, 1991)